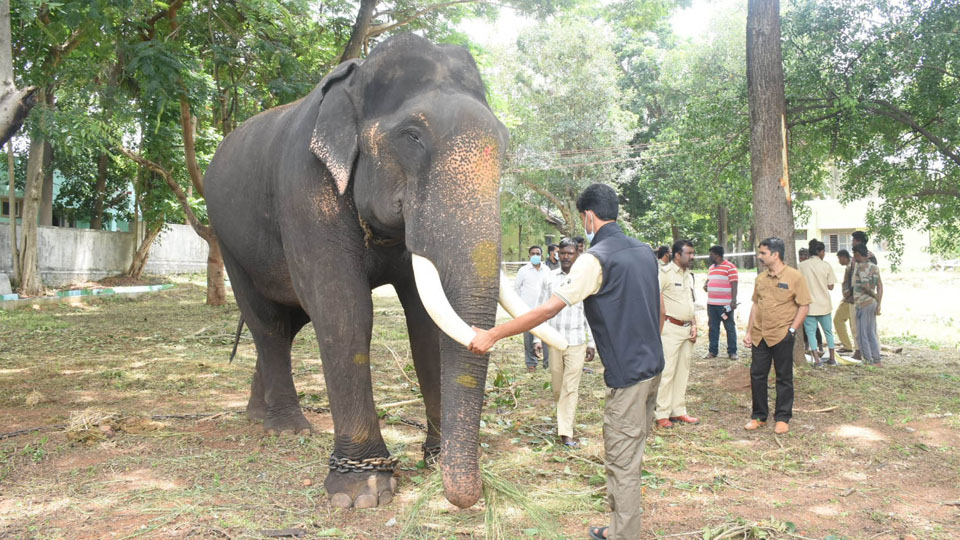 Mysore/Mysuru: With three months to go for this year’s Dasara festivities, the Forest Department is set to begin the process of selection of elephants, the star attraction of the 10-day festival and the grand Vijayadashami finale.

The Department will set the process in motion on July 15. This year, Dasara will begin on Sept. 26 and the Vijayadashami will fall on Oct. 5. The traditional Gajapayana — the march of elephants from the forests to the Mysore Palace — is scheduled to be held in the first week of August.

Forest Department officials said that teams will visit the elephant camps of Mysuru, Kodagu and Chamarajanagar to prepare a list of probable elephants and will send the same to the High-Power Committee for final approval. The Committee will decide on the number of elephants that will participate and if it decides that only 12 will take part, then three elephants will be weeded out in the final selection.

The Department usually brings over 14 to 15 elephants to Mysuru from the forests for the purpose of identifying the second line of Dasara performers. Suppose the second line is readied for the festivities, in that case, the Department can train them properly and also will be able to handle an emergency situation that might arise if an elephant falls sick. In 2021 and 2020, only eight elephants took part in the routine training as the COVID pandemic had cast a dark shadow over the celebration and the festival was restricted only to the Palace premises.

Speaking to Star of Mysore this morning, Deputy Conservator of Forests (Wildlife) V. Karikalan said that they will begin the screening of the elephants at the elephant camps on July 15 and the health check-up of the pachyderms will be from July 17 to check the overall health, musth condition, behaviour and pregnancy.

“Primarily, the teams will visit Dubare and Mathigodu Elephant Camps in Kodagu and the Ramapura Elephant Camp in Bandipur, Chamarajanagar district. Even the elephants that have made it to last year’s Dasara will be subjected to medical tests,” Karikalan said. This time, over 18 to 20 elephants will be identified and 14 to 15 of them will find a place in the final list. “Among the final selected ones, at least five will be female elephants and the Gajapayana will be held by Aug. 10 this year,” he added.

Department sources said that this time too, tusker Abhimanyu will carry the Golden Howdah and along with it, other elephants Gopalaswamy, Dhananjaya, Ashwathama, Vikrama and Arjuna are the sure-to-attend candidates. This year, Arjuna, the six-time veteran in performing the role of Howdah elephant (before Abhimanyu) will be honoured by making him the Nishane Elephant (pilot elephant).

Another elephant that is likely to make it to the list is Gajendra. As the festivities that were held in the last two years were limited to the Palace, the rigorous training through the morning and evening walks through the streets of Mysuru city were given a go-by.  This year, however, there will be full-fledged training and the Department is seemingly in a hurry to get the elephants from the forests by Aug. 10 to begin the training routine, sources said.

Apart from identifying the elephants for the festival, the Department has to call for tenders to supply food to the pachyderms and this includes managing their nutritious food from morning to night, fodder and a diet plan that has been followed for decades with new additions if any as prepared by the Department higher authorities.