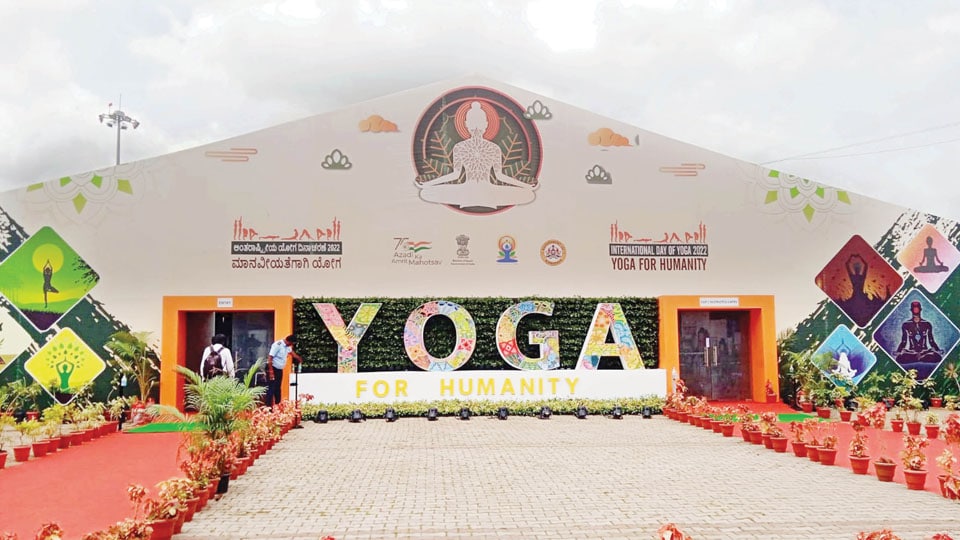 Mysore/Mysuru: Following overwhelming response from visitors, the unique expo of digital and static exhibits on yoga organised by the Ministry of Ayush in association with the District Administration at Dasara Exhibition Grounds in city as part of the 8th International Day of Yoga has been extended till June 26.

The two-day expo was to conclude yesterday.

It may be recalled, Prime Minister Narendra Modi, who was on a two-day Mysuru visit, inaugurated the first ever digital yoga exhibition on June 21 after participating in the mass yoga at Mysore Palace.

The Ministry of Ayush, which is continuously working to ensure that knowledge and benefits of yoga reach larger community, has organised this exhibition, where latest technologies like Virtual Reality (VR) projects the history and wisdom of yoga through informative and interactive elements.

The interactive element like Yoga with Modi, Yoga for Human Performance and Get Healthy with Yoga has used latest technology to engage people. Here visitors are challenged to perform yoga posture correctly by the side of animated yoga posture of PM Modi. Visitor will follow PM’s yoga animation postures, which will be detected and gamified; once finished, they will get pictures clicked with the Prime Minister in augmented reality. This interactive element uses posture recognition Kinect technology.

Vaidya Rajesh Kotecha, Secretary, Ministry of Ayush, said, “The world over, we are facing the crisis of supplies, the crisis of war, and in all these situations we need to talk about humanity. We also talk about connecting with each other and sympathise for each other and finding solutions together. So, ‘Yoga for Humanity’ was the appropriate and topical theme for this International Day of Yoga.”

In digital exhibition, visitors will get to see how yoga is beneficial in multitasking and enable them to take psychological tests that can suggest the types of yoga poses for them. Sensors for Body Mass Index (BMI) have also been put up and based on what category you fall in, different types of yoga will be suggested.

A ‘Heal in India and Heal by India’ wall has also been curated to showcase career opportunities in yoga, training, institutions, and research in yoga and its efficacy in disease mitigation and prevention. It also talks about the evolution of yoga and how today it has become a speciality in the field of healthcare and medicine.

The static exhibition consists of 146 stalls which have been put up by Yoga and Ayush institutions under the ambit of the Government of Karnataka and the Government of India. A few promising contestants of Startup Yoga Challenge have put up their stalls and showcasing how digitisation of yoga as technology is fast becoming a trend. Showcasing of a smart yoga band, a blouse that can measure stress and suggest which yoga you need to do, a headband to tell you if you are meditating correctly are among several things that are coming up in Startup field for yoga.

The Digital Yoga expo will be open to public from 9 am to 6 pm till June 26.