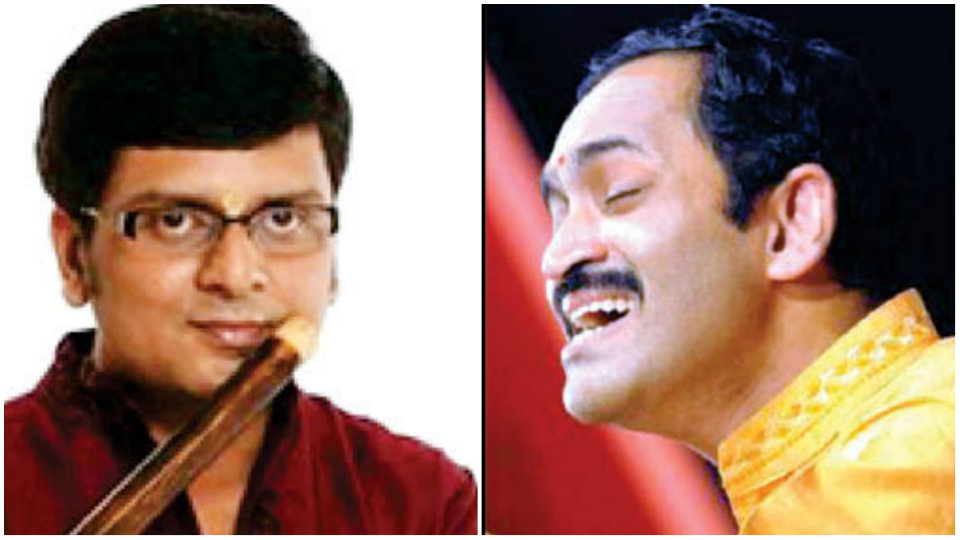 Ganabharathi has organised a unique vocal and flute duet, featuring Vid. Pattabhirama Pandit on vocal and Vid. Mysore A. Chandan Kumar on flute, at Veene Seshanna Bhavana in Kuvempunagar on June 15 at 6 pm. They will be accompanied by Vidu. Charulatha Ramanujam on violin,  Vid. H. S. Sudhindra on mridanga and Vid. G. S. Ramanujam on ghata.

Vid. Pattabhirama Pandit, one of the reputed musicians who has dedicated himself completely to Karnatak music, hails from a family of musicians.  His mother M.S. Nagarathnamma initiated him to music at the tender age of 3. He had his formal training under Vallabham Kalyana Sundaram for 6 years. He has also learnt from Sangeetha Kalanidhi Dr. S. Ramanathan for 3 years.

Mysore A. Chandan Kumar also hails from a family of great musicians. He is the great grandson of Sangeetha Kalanidhi late Mysore  T. Chowdaiah. Chandan Kumar learnt the art of flute playing from his Guru Vidwan M. Gopalakrishna and he is also taking guidance from Padma Bhushan P.S.Narayanaswamy.  Being an accomplished top grade flutist of All India Radio, he has performed in major Sabhas in India and abroad. The main characteristics of Chandan’s virile style are powerful blow, soul-moving melody and refreshing creativity. He is a receipient of many awards like Ustad Bismillah Khan Memorial Award, Yuva Kalabharathi, Ananya Yuva Puraskar etc.