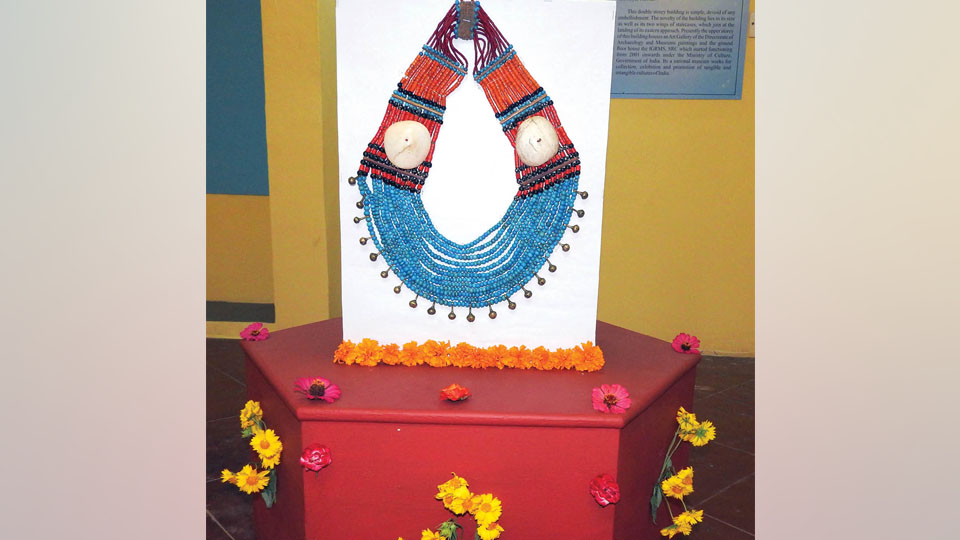 Rengmein Leck, beads necklace from Nagaland on display at IGRMS

The Naga people are an ethnic group conglomerating of several tribes native to the North-Eastern part of India and North-Western Myanmar (Burma). Nagas descend from Tibet-Myanmar ethnic races. Most of them live in Nagaland, Manipur and Arunachal Pradesh. There are about 3.5 million Nagas, with maybe two million of them in Nagaland in India.

Nagas speak languages and dialects that are part of Tibeto-Burman family. Their ornaments are simple but pretty. A necklace of beads is generally worn round the neck. The beads may be made of some kind of stone or shells.

The Konyaks are distinguishable from other Naga tribes by their pierced ears and tattoos which they have all over their faces, hands, chests, arms, and calves. Konyaks are famous for gun-smithing, iron-smelting,

The Konyaks have the largest population among the Nagas. They are found in Tirap, Longding and Changlang districts of Arunachal Pradesh; Sibsagar district of Assam and also in Myanmar. They are known in Arunachal Pradesh as the Wanchos. ‘Wancho’ is a synonymous term for ‘Konyak.’

In continuation of its series  under ‘Exhibit of the Month,’ the Southern Regional Centre (SRC) of Indira Gandhi Rashtriya Manav Sangrahalya (IGRMS), Mysuru, has displayed Rengmein Leck, a beads necklace from Nagaland at its Wellington House on Irwin Road in city.

READ ALSO  Chakri Jhul from Chhattisgarh on display at IGRMS

The exhibit will be on display during the month of June from 10 am to 6 pm daily.