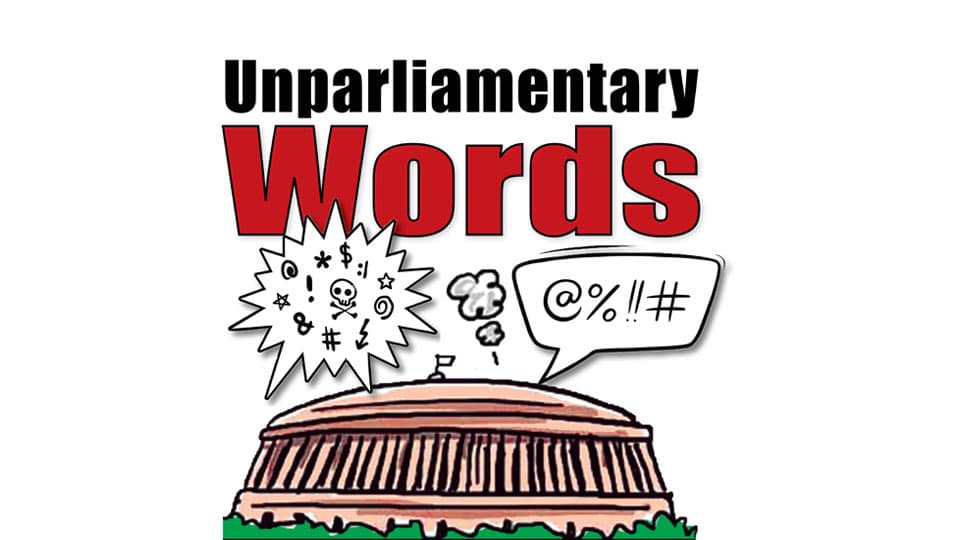 The Monsoon Session of the Parliament is scheduled to begin on July 18 and it will be a ‘tame’ and a ‘lame’ one. Why? Because of a book called ‘Unparliamentary Expression’, a compilation of words deemed unfit for use in Parliament, released by the Lok Sabha Secretariat.

What he meant was that the words in the list have been expunged before, so why use them again and make him expunge them again? That is why they’ve been deemed as unparliamentary words.

How can a Member of Parliament debate without words like ‘false’, ‘eyewash’, ‘fabrication’, ‘hypocrisy’, ‘incompetent’, ‘lie’, ‘mislead’, ‘negligence’ and ‘partisan’? And what has the poor ‘lollipop’, a children’s candy, done to deserve to be on this infamous list? Will we add more food items to this list because even eating ‘peanuts’ can be used in a derogatory manner to indicate incompetence and lethargy?

When debating, context is essential; hence words should not be banned. Instead, the usage of a particular word during a particular debate must be expunged.

In 1958 when a member equated the first Prime Minister Jawaharlal Nehru to Nathuram Godse, the man who murdered Mahatma Gandhi, the word ‘Godse’ was expunged and put on the ‘unparliamentary’ word list. So, a person’s last name became unparliamentary!

Context is essential; that is why we must allow the expunging of certain words and phrases on a selective basis and not issue a blanket ban.

Blanket banning innocuous words will only make debates ineffective. MPs often use these common words during a debate, and the MPs’ train of argument over an issue will be broken as some leaders will shout and object to using the banned word.

The debate loses steam, tangent topics come into play, and soon chaos will follow with each side shouting over the other.

Former President K.R. Narayanan once said a Legislature ought to be an exciting place rever- berating with debates and arguments and scintillating with wit and humour. And it used to be so.

One of my favourite barbs in the Parliament is when Piloo Mody, an MP from Swatantra Party and brother of Russi Mody, who was the Chairman of TATA Steel, got irritated with Congress MP J.C. Jain, who kept interrupting him as he addressed the House. Finally, a frustrated Mody screamed, “Stop barking.”

J.C. Jain immediately complained to the Chair, saying, “Sir, he is calling me a dog, it’s unparliamentary.”

Surprisingly, Jain did not object, and it stayed on record!

Without humour, wit and intellect, there can be no debate or discussion in a political space because if you have wit and humour, then the ego will stay at the door, and debate will come to the fore. You will make space for the ‘other view.’

Also, if your true intention is to debate sincerely, you will not use vulgar and crass words or phrases; you will do that only if you want to stall a debate. Also, it’s time our leaders develop a little thick skin and guts like they do while facing corruption charges. I’m sure they can handle words like ‘mislead’, ‘negligence ‘and ‘partisan.’

Finally, it’s the prerogative of the Chair to expunge what is unparliamentary. But if even the most basic words are deemed unparliamentary without adding context, then MPs will start using alternative words or phrases.

Our nation’s most famous wordsmith MP Shashi Tharoor will surely give trouble to the Chair this Monsoon Session. After all, he wrote a small book full of unusual words called ‘Tharoorosaurus’. One can be sure that Shashi Tharoor and his team are already looking up outlandish and un-pronounceable words to use in place of the banned ones.

So while other members suffer from a bout of *’Lethologica’, Tharoor will be well prepared and use words that will create quite the *’kerfuffle’ in Parliament this Monsoon Session. We are sure his publisher, Penguin Books, can’t wait to publish “Tharoorosaurus in the ‘House’: The Parliament Edition.”

If one wants to battle in Parliament and win, one needs to have the two ‘w’s — Wit and Words. Also, you will excel if you have tone, articulation and voice quality. Modi has all the above traits; that is why he grabs the attention of his audience, as also Rahul Gandhi…

Except, while one mesmerises his audience, the other amuses. It’s our misfortune that we live in a time when we desperately need a strong debating opposition party led by a witty and articulate opposition leader, but we have neither.

We need fierce debates in Parliament and words should flow, even the most aggressive, loud and foul. Expunge and expel, but let them speak. Let the people see and hear the kind of leaders they have elected because, in truth, we are not a true ‘decent’ democracy but a *kakistocracy.

PS: All words that twisted your tongue and racked your brain are thanks to Shashi Tharoor.

* Kakistocracy: A form of government in which the least qualified or most unprincipled individuals are in power.

* Kerfuffle: A disorderly outburst or disturbance.

* Lethologica: The affliction of not remembering the right word for the thought you are trying to express.