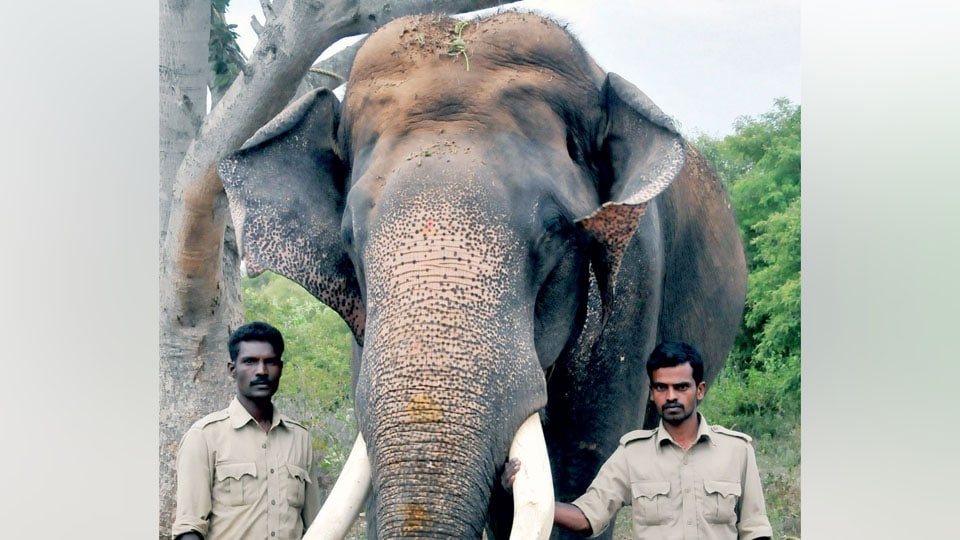 Upset over being slighted, Sannappa decides to leave Arjuna

Mysuru: Dasara Jumboo Savari has ended on a grand note but there is a simmering discontent among Mahouts as the Forest Department ignored one eligible Mahout and chose a less-experienced Mahout to steer Arjuna, the Howdah-elephant. And that is why the Department officials did not disclose the name of Arjuna’s Mahout till the last moment, allege Mahouts.

The Mahouts, who are levelling allegations against the Forest Department, have come in support of Sannappa alias Mahesha who was not given a chance to lead Arjuna despite his closeness and association with the Howdah-elephant. They are crying injustice as the Department chose Vinu to lead the elephant at the last moment.

“Who will lead Arjuna?” This question cropped up last year after the death of its Mahout the seasoned and the efficient Dodda Masti. He retired one-and-a-half years back and died last year just a fortnight before last year’s Gajapayana. Following his death, the responsibility of training Arjuna fell on Dodda Masti’s son Sannappa.

Sannappa, as the Kavadi to his father, was serving Arjuna even before his father’s death and Arjuna too began listening to his commands. He efficiently performed his duties last year and even sat on Arjuna during the procession for the first time and was praised for successfully steering the elephant from Mysore Palace to Bannimantap, carrying the Golden Howdah.

Trouble began when the Forest Department passed an order to appoint Vinu as Arjuna’s Mahout and Sannappa as his Kavadi. The appointment was made last year itself and as Vinu was new to Arjuna, the Department had told him that Sannappa would sit atop Arjuna in 2016 Dasara. After last Dasara, Vinu developed a close bond with Arjuna. As per law, Vinu is Arjuna’s Mahout and Sannappa, whose services are confirmed only six months ago, is his Kavadi.

This Department order, however, has not gone down well with Sannappa who feels that the officials have caused him grave injustice. “Forest officials bent backwards following political pressure and have caused injustice to me. I was taking care of Arjuna ever since my father Dodda Masti’s death and now Vinu is doing the honours,” said a visibly upset Sannappa.

Sannappa has now decided that he would leave the Balle Elephant Camp and go to Kushalnagar camp. He even boycotted the picnic arranged by the Department for Mahouts, Kavadis and their families. “When Dodda Masti died, Forest officials had no clue on who will lead Arjuna and at that time of crises, I came forward and helped the Department. I trained Arjuna and led the Jumboo Savari last year. This time, however, I was robbed of a chance to sit on Arjuna due to political pressure,” Sannappa told reporters.

He also alleged that some Department officials had conspired to separate him and Arjuna. “Arjuna is very sensitive and the officers wanted to separate me from him. This has hurt me a lot. I have information that they have captured six elephants in Kushalnagar and there are freshly captured elephants at Dubare Elephant Camp waiting to be trained. I have decided to leave Arjuna and choose some other elephant,” he said, with tears in his eyes. “Expert Mahouts are also required to train elephants in Tamil Nadu and I might go there also. Opportunities are aplenty but it is hard to leave the elephant that you have nurtured for years,” he said with a sigh.

READ ALSO  It was Abhimanyu who instilled confidence in me: Mahout Vasanth

Sannappa has taken it as a challenge and he has promised that he will make use of the training provided by Dodda Masti. “His training and his fame will not go waste. I will train an elephant and will name him ‘Masti’ in my father’s honour and will train him in such a way that he will be chosen for Dasara celebrations. Today I have accepted the injustice caused by the Department. Just give me two years and I will prove myself,” he said.

A few Mahouts have said on condition of anonymity that as per tradition followed since ages, a person from Jenukuruba community leads the elephant and that too, Howdah-elephant. “This time, the tradition has been broken as the Forest Department officials bowed to political pressure,” a Mahout said.

“As per law, Vinu is Arjuna’s Mahout. But is it possible to gain the trust and confidence of an elephant within one year? Sannappa has been with Arjuna since years and the Department officials should have considered this. The officials chose to please someone and victimise Sannappa. If the same trend continues, a day might come when the traditional Mahouts will boycott Dasara,” another Mahout said.