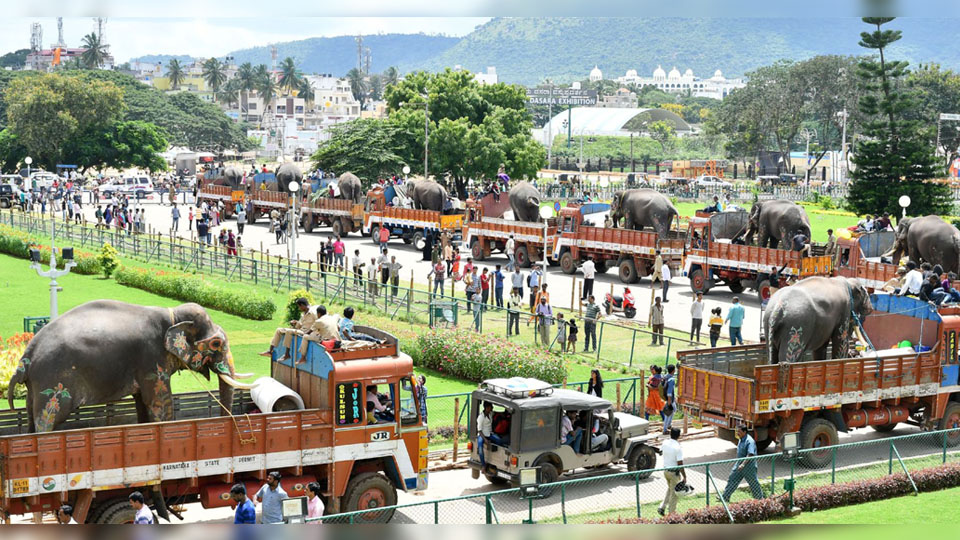 Mysuru: Dasara elephants that were the cynosure of all eyes since a month, moved back to their respective camps this morning with a promise that they would return next year.

They began their journey along with Mahouts, Kavadis and their families at around 11.30 am and were escorted by Forest Department vehicles till the city limits.

It was Varalakshmi who climbed the truck first followed by other elephants. The group included show-stopper Howdah-Elephant Arjuna who returned with his Mahout Vinu and family. After the celebrations concluded on Sept. 30, the elephants were given healthy food and a relaxing massage bath using coconut shells and fibre brushes.

Today, breakfast was arranged by the District Administration for all the Mahouts and Kavadis and their families and they relished on Idly, Vada, Pongal and tea, coffee. After this, the family members packed their bags and baggage and loaded them on trucks. One-by-one, the elephants climbed the trucks and left the city.

Special Mahouts who participated in the preparation of Gaadhi and Namdha to be mounted on top of elephants were given an honorarium of  Rs. 5,000 on behalf of Palace Board and Rs. 3,000 on behalf of Forest Department. 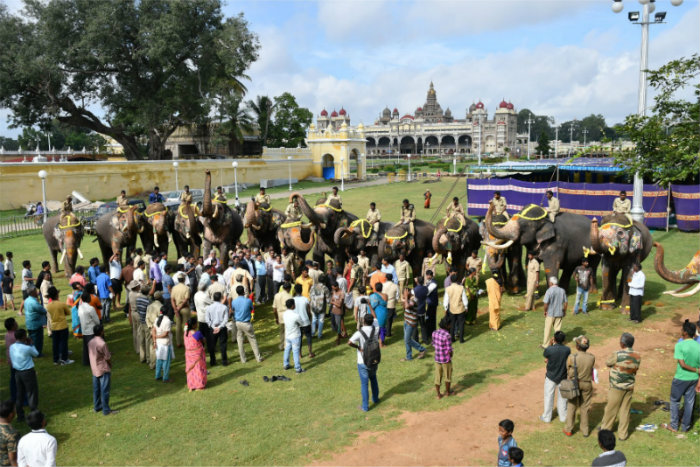 Veterinarian Dr. D.N. Nagaraj, who takes care of the Dasara elephants, said that all the animals were fit and healthy. All the 15 elephants have gained bodyweight after their arrival to Mysuru in August.

READ ALSO  Mahouts and Kavadis’ kids to dance at Makkala Dasara on Sept. 22

Bheema, the first time Dasara participant, who weighed 3,410 kg on his arrival weighed 3,810 kgs, Kaveri and Gajendra, who were 2,820 kgs and 4,600 kgs, now weighs 3,065 kgs and 5,050 kgs respectively. Other elephants that arrived in the second batch, Harsha, Prashanth, Gopi, Drona, Gopalaswamy, Vikrama and Krishna too have gained weight.

Only 12 of 15 elephants leave city

Today, of the 15 elephants that came for Dasara celebrations, 12 left for various jungle camps. They were Gajendra, Abhimanyu and Krishna who had to stay back to shift elephant Rama from the Chamarajendra Zoological Gardens (Mysore Zoo) to its Koorgalli campus.

Rama is being shifted to Koorgalli as the number of elephants housed at the Zoo has increased and Rama is turning out to be a troublesome elephant that fights with every other male elephant, said Zoo authorities.

Gajendra, Abhimanyu and Krishna will help the Zoo authorities to shift Rama in a truck and these elephants have the capacity of controlling Rama in case he creates trouble, said Zoo authorities.

As the 12 elephants left the Mysore Palace compound, the six female elephants housed inside the Palace were behaving in a restless manner. They made strange sounds and grunts as if they missed the company of Dasara elephants.