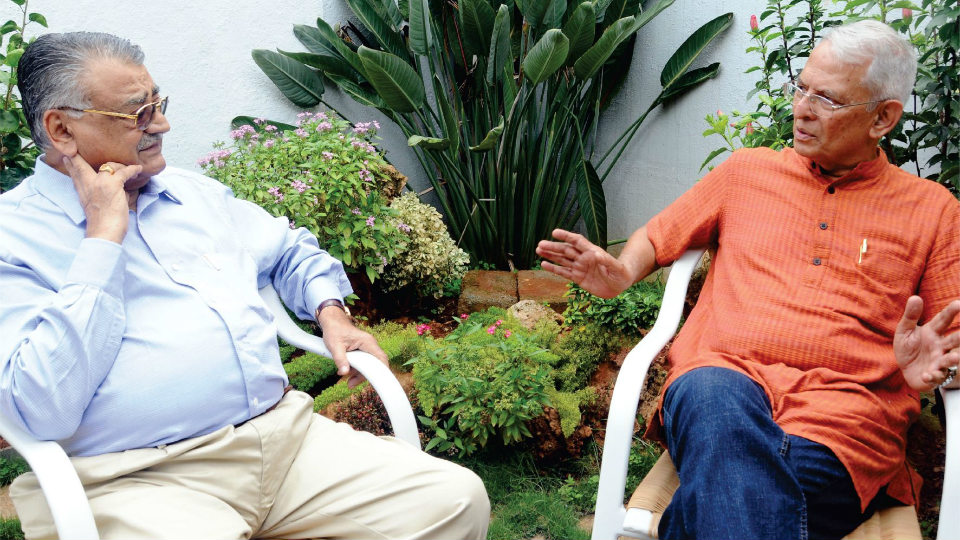 A giant leap for Pratham Mysore

Pratham Mysore was founded by Ashvini Ranjan and his wife Shashi Ranjan as part of their post-retirement activity. They adopted two Govt. Primary Schools with 60 children in Nachanahally Palya slums in Mysore South during May 2000 not realising the many challenges they would be faced with.  Having entered the unchartered terrain, there was no turning back. It was an initial two years of financial struggle coupled with the problem of finding the right people and dealing with the system.

It was the sheer determination of the couple to succeed, in what they set out to do, that one should admire. Pratham’s growth today is very rewarding to its founders, but more importantly to over five lakh students who will now benefit as a result of an MoU signed between Pratham and the State Government. K.B. Ganapathy, Editor-in-Chief, Star of Mysore, spoke to Ashvini Ranjan for more details. Some excerpts. —Editor

K.B. Ganapathy (KBG): I understand that Pratham Mysore has recently entered into a partnership with the government to teach in government schools. Can you explain?

Ashvini Ranjan: Pratham Mysore has been formally invited to help improve the education standards of school-going children in Primary schools in 13 districts of Karnataka. This offer to assist was based on the results of pilot studies conducted by the government during 2016-17 in the districts of Mysuru, Mandya and Ramanagaram using Pratham methodologies of teaching.

The ‘Odu Karnataka’ programme which is a method of remedial teaching developed by Pratham was administered in 4,429 schools in the said three districts. Based on the significant improvements in the children’s learning levels, Pratham was formally invited to extend its services in 13 Districts. An MoU between Pratham Mysore and the Government of Karnataka was signed on Sept. 13, 2017. This effectively means five lakh children studying in standards 4 and 5 in about 18,500 schools will benefit from this programme. To Pratham, this is a giant leap and at the same time an enormous challenge !

KBG: Why do children in government schools across the country perform poorly?

Ashvini: There may be several reasons why children despite being in school are not learning. In a typical Indian classroom, teacher teaches from the textbook prescribed for that grade. But, if the child has not acquired the  basic skills like reading and basic math,  the child will find it difficult to follow what is being taught in the class. In the absence of educated parents to help the child in its lessons at home, the child loses connect with the lessons the teacher teaches in the class.

The other important reason is that, India’s current education policy under the Right To Education Act of 2009, promises that every child, up to the age of 14 is guaranteed free and compulsory education.  Thus, no child can be failed or held back until grade 10. In other words, it is an automatic promotion policy whether or not the child has achieved grade level learning. So much so, slow learners and children who have learning challenges remain where they are in their learning competencies even as they are promoted to higher classes.

KBG: How is your method of teaching different from that of government schools and what is ‘Odu Karnataka’ programme?

Ashvini: We follow the same curriculum as that of the government schools. But we do not believe ‘One size fits all’ method. Each child is different from the other and children in early years at school require individual attention. The child’s progress is closely monitored and administered timely remedial coaching. ‘Odu Karnataka’ is a 60-day course for primary school children in classes 4 and 5 to improve reading and maths abilities. Children are grouped by their abilities rather than by age or the grade. The course uses Pratham’s rigorously evaluated methodology.

KBG: How do you teach in government schools when there is already a teaching structure in place?

Ashvini: This is probably the biggest challenge that we faced since inception. Two things come to my mind. First, we are an NGO and secondly, we chose to work in the government school system where there was a real need for improvement. Both were not easy. An NGO has abundance of idealism but is limited in resources. Both money and committed people. Secondly, the decision to work with the government school system was not easy to begin with. We were not admitted inside the classroom. Therefore, we engaged children after school hours in the corridors and during holidays. This was not easy. It was like running a race with both our hands and legs tied. But we pursued irrespective. It is this commitment that the government took note of and which ultimately paved way for the partnership. 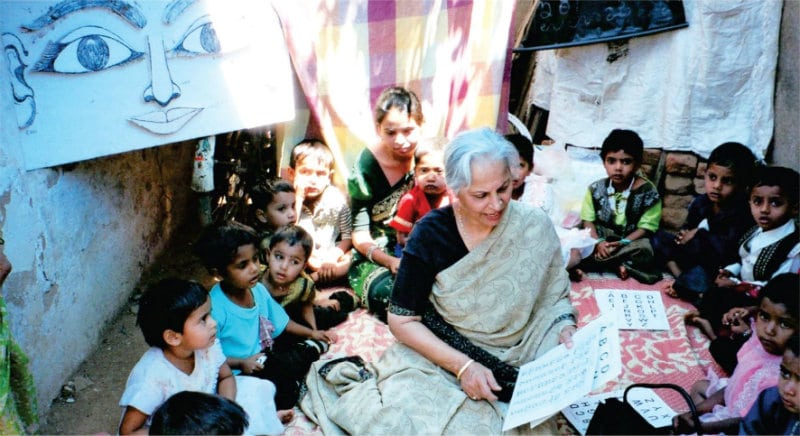 KBG: By entering into partnership with the government, will your own volunteers be teaching in all the schools?

Ashvini: In the present partnership arrangement, we train the existing government resource persons in our methodology of teaching. They in turn will train the teachers in our methods of teaching. Our volunteers will closely monitor the training sessions as well as classroom transactions. We did the same successfully in Mysuru, Mandya and Ramanagaram.

KBG: What is the outcome of the pilot programme you conducted in the districts of Mysuru, Mandya and Ramanagaram?

Ashvini: Though in theory our methodologies of teaching appeared to be in order, they were not tested on such a large-scale and more importantly, Pratham’s ability to manage 5,000 schools in the three districts. The training sessions of the first-level government’s Cluster Resource Persons’ (CRP) and then overseeing CRPs training the teachers went very well. The government officials from the Education Department and the school teachers too were extremely supportive. They were convinced with the programme and saw value in the new approach.

At the beginning of the course, Pratham and the Government Education Department jointly administered a test (baseline test) to assess the children’s competency in reading and math. After 60 days of two-hours-a-day intervention, another test was administered (called the endline test) to measure changes/improvement if any. The result was as follows:

KBG: Pratham is an all India organisation. Are you a part of it?

Ashvini: The answer is no and yes. No because we are an independent Trust with our own bylaws, Board of Trustees, Advisors and programmes. But since we have common goals with Pratham India, which is “Every Child In School and Learning Well” we  preferred to collaborate and benefit from each other’s learning and resources.

KBG: How do you develop teaching techniques, lesson plans, etc.?

Ashvini: Pratham is a learning organisation. Very qualified and accomplished academicians and teachers help us develop techniques by continuously experimenting, monitoring and evaluating new methodology and select that which give us best results. It is our grassroot presence that is the source of our knowledge. 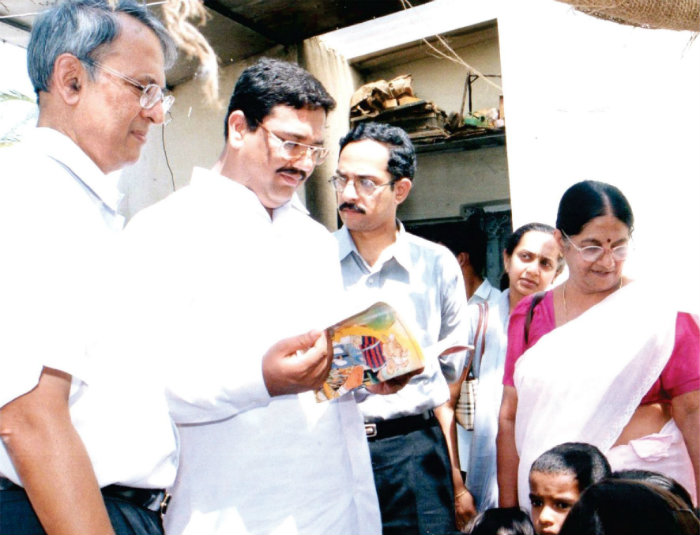 A file photo of Tanveer Sait’s visit to Pratham Mysore.

KBG: Are all the people working in Pratham volunteers?

Ashvini: We have both permanent paid staff and those who offer voluntary service.

KBG: What is your source of funds?  Does the government pay for this partnership?

Ashvini: We do not receive any funding from the Government.  We only provide academic support, share our teaching and learning content with the Government. The current Government partnership cost is being supported partly by HSBC Bank, ITC and Rotary Foundation. Apart from these, our direct programmes are supported by AVAYA, PWC Pragathi from Austin, Infosys, Procter & Gamble and so on.

KBG: To what do you attribute your success?

Ashvini: Pratham Mysore has grown considerably since 2002, the year it started. We work at the ground level in a rural environment. We have good rapport with the rural population.  We have a Board of Trustees and Advisors guiding us. Our secretariat, staff and volunteer strength of nearly 500 are very committed individuals. It is because of their continued help and support, we have reached this level of success.

An MoU was signed recently between Pratham Mysore and the Government of Karnataka to improve education standard of students studying in 4th and 5th standards in Government Schools.

Speaking at the signing event, Primary and Secondary Education Minister Tanveer Sait said: “Society has classified Government Schools  for poor children, aided institutions for the middle class, and private schools for the rich.”

He recalled having seen Pratham’s work in Mysuru since its inception and  felt confident that this partnership will support in bringing in quality education to compete with private schools.