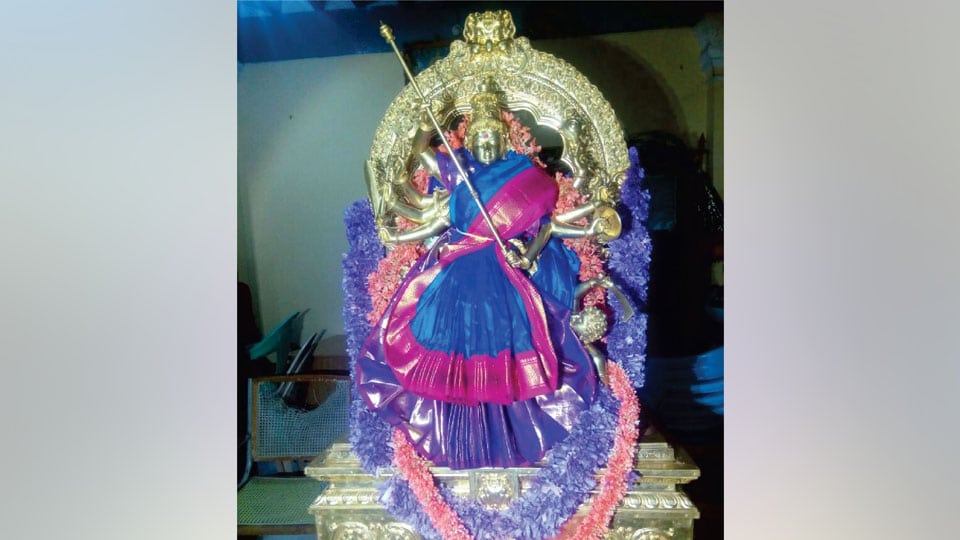 Mysuru: The controversy over the saree draped on the idol of Goddess Chamundeshwari, which was placed on the Golden Howdah atop the Howdah elephant Arjuna during Jumboo Savari, is refusing to die down and has become a topic of widespread discussion in the social media.

Initially, it was reported that the blue saree with magenta border that was draped on the idol was given by Parvathi, wife of Chief Minister Siddharamaiah who wanted to fulfil her vow. Parvathi, who avoided the limelight despite being the CM’s wife, visited the Chamundi Temple on all 10 days of the Dasara festivities and according to sources, she prayed for the well-being of her husband and son Yathindra Siddharamaiah who are set to fight the next Assembly elections.

The saree offered by the CM’s wife, however, led to a controversy as the temple priests did not give a chance to a businessman from Balepete in Bengaluru to drape the saree offered by him. The merchant has been offering the specially woven saree since the last 15 years and this time, the priests chose the saree donated by CM’s wife.

Now, Mysuru Mayor M.J. Ravikumar has claimed that he too had donated a saree to Goddess Chamundeshwari and he was shocked to see that the saree donated by “someone else” was draped on the idol during Jumboo Savari.

Ravikumar said he was deeply hurt to see the saree he offered to Chamundi missing. In all, he and his wife had offered 4 sarees, one for Chamundi idol, second for Jwala Tripurasundari idol and other two for idols that are kept in howdah during Jumboo Savari. All four sarees were draped around the idols right in front of him, but when the Jumboo Savari began, the saree he had offered to Chamundi had disappeared.

He said that he had offered sarees to the Goddess, praying for the prosperity of Mysureans and JD(S) State President H.D. Kumaraswamy who underwent a heart surgery recently. But to his dismay, he found that the idol was draped with some other saree during the procession.

“I had offered the saree a week ago and the priests too had agreed to drape the idol of the Goddess. I had convinced the businessman from Balepete to give me a chance this time and he had agreed to it and accordingly, the priests had draped the saree given by me on the idol. When the procession began, I realised that the saree that was given by CM’s wife was draped above the saree that I had given. I was shocked as the priests had broken the tradition by draping two sarees on the idol and all this due to pure political pressure,” Ravikumar said.

“It is not right to do politics in such matters. The saree that was already offered should have been used. I will bring the issue to the notice of authorities concerned,” he added. The Mayor has already expressed his displeasure over the issue and it might become a major political controversy as the First Citizen belongs to the Opposition party JD(S) in the Mysuru City Corporation.

Chamundeshwari Temple chief priest Dr. Shashishekar Dixit told reporters that the saree donated by the Chief Minister’s wife was draped on the idol and the saree given by the Mayor was placed on the shoulders of the idol. A temple source said that there was no protocol to offer sarees and usually, sarees given by devotees would be used to drape the idol.

Offering a saree to Goddess Chamundeshwari concludes the ritualistic worship. Offering saree  to the Goddess is akin to praying for one’s spiritual progress and welfare.