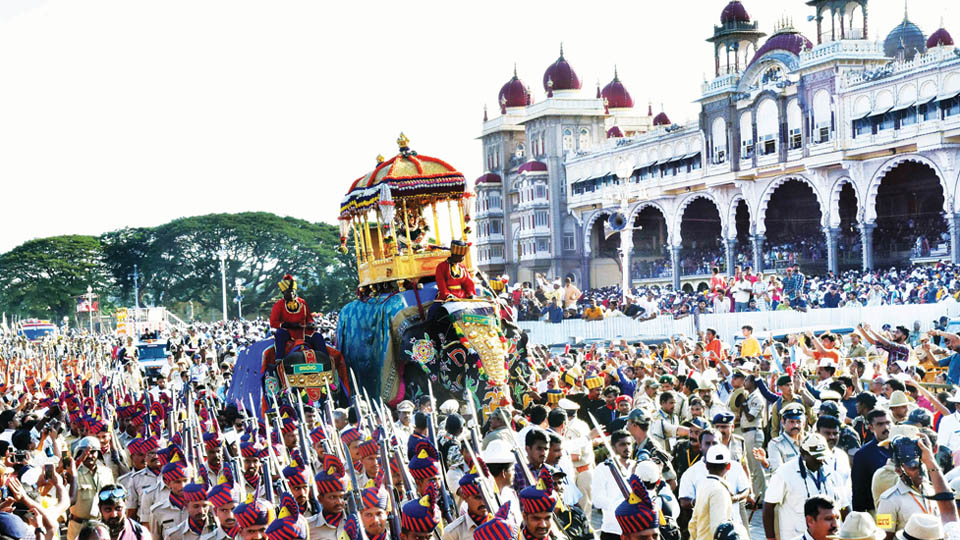 Mysuru: Many worlds of one city unveiled at the Jumboo Savari last evening with caparisoned elephants in the lead, marking the culmination of the grand finale of the ten-day Dasara festivities. This is 409th Dasara that was started in the Mysuru region by Raja Wadiyar at Srirangapatna in 1610 and subsequently taken over by democratically elected Governments that are continuing the tradition as ‘Nada Habba.’

Though a low-key affair this year, with severe floods in as many as 22 districts in the State in which more than 80 persons lost their lives and lakhs of people rendered homeless and huge crop and property loss particularly in North Karnataka, the elephants, led by the mighty Howdah-carrier Arjuna, performed their roles with well-established protocol and achieved perfection.

The cynosure of all eyes was of course 60-year-old Arjuna with the famed 750-kg Golden Howdah, in which the idol of Goddess Chamundeshwari was placed. The last nine days saw the city awash with lights and a slew of cultural programmes were held, for economic fortunes also hinge to a large extent on the tourism sector. Dasara has emerged as a fulcrum and is a money spinner for the stakeholders.

Though the origin of the Dasara is deeply rooted in mythology, Mysuru Dasara has historical association with the rulers of the Vijayanagar Empire. The Wadiyars of Mysuru inherited the cultural practices of Vijayanagar rulers and ‘Nada Habba’ is a continuation of the grand tradition.

The procession was flagged of by Chief Minister B.S. Yediyurappa who performed puja to Nandi Dhwaja at the Palace North Gate (Balarama Gate) at 2.10 pm in Makara lagna.

The procession (Jumboo Savari) was inaugurated by the CM at the Palace premises in the auspicious Kumbha lagna at 4.21 pm by showering flowers on Goddess Chamundeshwari inside the Golden Howdah from an elevated rostrum in front of the Palace.

The splendid finale was witnessed by a sea of humanity that thronged the Mysore Palace and the streets leading to the final destination, Bannimantap. People crowded the streets to witness the pageantry of procession and eye-catching tableaux of the once-a-year extravaganza. The cultural display unfolded beginning with a majestic march by the Nishane elephants led by veteran Balarama and comprising Abhimanyu (Naupat elephant), Dhananjaya, Durgaparameshwari, Gopalaswamy, Gopi and Vikram (Saalaane). As the procession began, there came 21 cannon firing that echoed a ‘Boom’! As the Gun Salute echoed the Palace vicinity, Arjuna raised his trunk as a mark of respect. National Anthem was also played.

The Jumboo Savari reached its pinnacle when Arjuna entered the procession carrying the Golden Howdah with ease, inviting to thunderous applause. He was flanked by Cauvery and Vijaya. Surrounded by a strong Police and Commando Force, Arjuna, carrying the Golden Howdah for the eighth time in a row, and his companions exited the Palace, marching royally on the streets to reach Bannimantap.

More than five lakh people witnessed the grand spectacle starting from the Palace till Bannimantap. They climbed buildings, dilapidated structures, treetops, specially erected barricades and occupied every space available, jostling with other spectators for space. While over 26,000 people were inside the Palace, others dotted every nook and corner and every available vantage point.

The Police, over 10,000 inn number, struggled to control the crowd at places where people were spilling over barricades. The Police were exhausted in checking each and every person who entered the Palace. However, the process passed off incident-free.