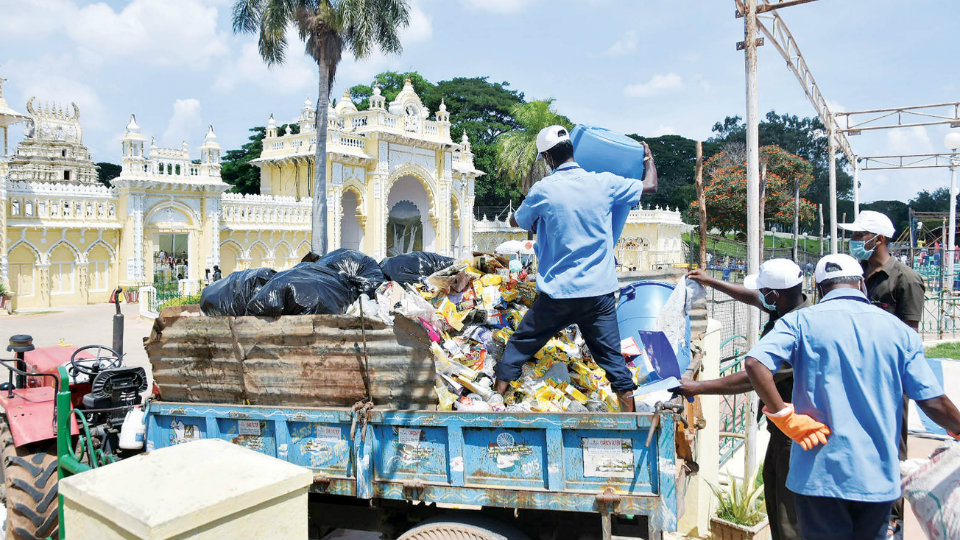 Mysuru: A day after a successful Jumboo Savari, Pourakarmikas swung into action as early as 7 am today to clear garbage and waste littered on the procession route and the roads of Raja Marga and surrounding areas.

Meanwhile, people passing through J.K. Grounds from Dewan’s Road had to encounter bad smell emanating from rotten ash gourds that were kept on sale for Ayudha Puja. The vendors have left unsold and broken ash gourds to rot. Mysuru City Corporation is yet to clear them.

“It is because of the co-operation from all elected representatives that Dasara was successful. Minor lapses would be corrected before next year’s Dasara. The issue of passes and tickets will also be solved,” he added.

Somanna also mentioned  that State Government was discussing on establishing a permanent Dasara Authority. When asked if they were happy with the functioning of the Police, Pratap Simha said the Police had done well.

“I have been working for successful conduction of Dasara ever since I was appointed as Mysuru District Minister. Now, I will dedicate maximum time for Housing Ministry and see that relief works are completed. I will also tour North Karnataka were maximum damages have been reported,” said Somanna. MLA L. Nagendra was also present.

Chamundeshwari Maharathotsava will be held atop   Chamundi Hill from 6.30 am to 7.15 am on Oct.13 and Theppotsava at Devikere on Oct.15 at 6.30 pm, according to a press release.