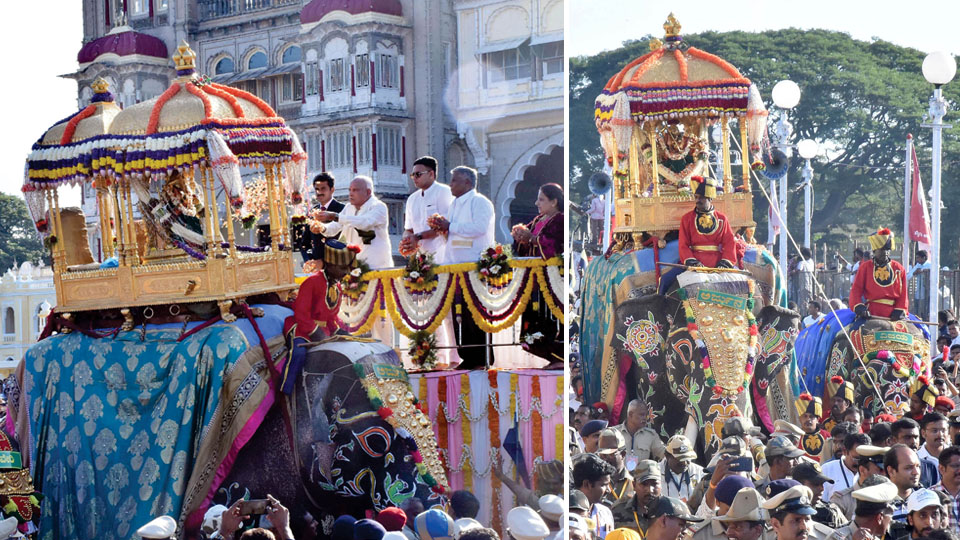 Mysuru: Last evening, while the 750-kg Golden Howdah was being fastened on Arjuna, the Tusker swayed its head vigorously causing the Howdah to tilt to one side. Panicked by this incident, a couple of Mahouts, who were on top of Arjuna, pacified him and Arjuna diligently obeyed the orders.

The Howdah carried the idol of Goddess Chamundeshwari. Before the Howdah was mounted on Arjuna, it was brought out from the Mysore Palace vaults where it is kept in safe custody. Pujas were performed and the idol of the bejewelled Goddess (Utsava Murti) that was brought from Chamundeshwari Temple atop the Chamundi Hill was placed inside the Howdah.

The Golden Howdah was lifted with the help of a crane and mounted on Arjuna. To provide cushioning effect, Gaadhi and Namdha (made of soft grass) were fastened on Arjuna first. The Howdah was placed in the middle and ropes were tied on him. Two ladders were placed on either side of the elephant and in the middle was the crane that lifted the Howdah.

Since the last two years, the process of lifting the Howdah and mounting it on Arjuna is being done under the cover of huge curtains that are placed around the ladder and the crane. Member of Royal family Pramoda Devi Wadiyar (who was watching the process through the windows of the Mysore Palace residential wing) noticed the tilting Howdah and alerted the Mahouts and authorities through hand signals.

Sources told Star of Mysore that a Mahout who bent in front of Arjuna angered the elephant that stepped forward and shook his head twice. This caused the Ambari (Howdah) to tilt. Sources said that one of the Mahouts who was brought to be trained to tie the Howdah bent before Arjuna to pick up a coin, angering the elephant.

Seeing the idol of the Goddess, people started throwing coins at the Golden Howdah and it is believed that if one possesses the coin that fell from the Howdah, it will bring good luck for his family. Such coins are placed in the puja rooms of houses. Attempting to pick up a coin, the Mahout bent before Arjuna. As the mighty Arjuna shook his head, the panicked Mahout fell to one side and hurt himself.

Soon, the Mahout was asked to leave the place. The incident had not come to the notice of public domain yesterday and it was believed that a photographer flashed the camera lights on Arjuna and the Tusker panicked. The real reason emerged only today.

Amidst a clear sky and bright sunshine, Chief Minister B.S. Yediyurappa (BSY) performed puja to Nandi Dhwaja at the Balarama Gate of the Palace at 2.03pm in the auspicious Makara Lagna on Tuesday.

People were seen offering prayers to the idol of Goddess Chamundeshwari, even as Arjuna walked majestically.

Earlier on Tuesday, BSY visited Suttur Mutt at the foot of Chamundi Hill and sought the blessings of Sri Shivarathri Deshikendra Swamiji. He took part in Banni Puja in the Mutt amid the playing of Nadaswara.

The Suttur Seer distributed ‘Bannipatre’ and fruits to devotees who visited the Mutt on Vijayadashami Day.