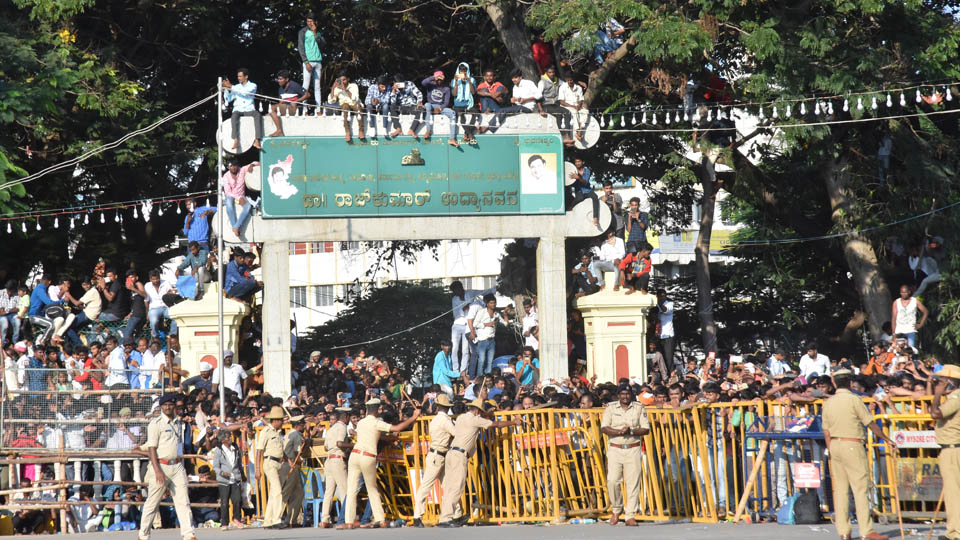 Mysuru: Though Jumboo Savari and Torchlight Parade, the finale combo of Dasara festival, apparently went on peacefully without a glitch, it was not without a couple of sidelights indicating inconvenience to people. Here are a few incidents that captured the attention of Star of Mysore reporters and photographer.

With crowd becoming unmanageable, people began to crash through the barricades at statue square, K.R. Circle, Ayurveda College Circle and other places. The plight of kids was pitiable being literally crushed in the melee, a few of whom were rescued by the Cops who were forced to resort to a mild lathi charge to subdue the crowd. A woman and a man who swooned out of exhaustion were helped to recover with a glass of water. Elderly women and children screaming for help was a common sight at many places.

Several organisations voluntarily supplied water, buttermilk and juice free of cost to people in need and also for the folk artistes and Police Personnel to quench their thirst.

Family taken for a ride

An elderly person Ramdas from Bengaluru and three of his family members were frantically looking for passes to watch the Torchlight Parade. Cashing in on the situation, a miscreant offered four passes for a total sum of Rs.1,500. Ramdas agreed and bought the passes paying the said amount. When the family went to the assigned gate at Torchlight Parade Grounds, the Cop at the gate scrutinised the passes and said that only one pass was valid while the other three were for Palace premises. The family was just taken for a ride, bemoaned Ramdas speaking to Star of Mysore.

Despite the presence of a strong Police force and barricades all around, a few youths were seen hoodwinking the Cops and scaling the compound to watch the Torchlight Parade.

Though the city was pounded with heavy rain on Monday night extending till wee hours of yesterday, the weather was bright and sunny in the morning and evening posing no hindrance to Jumboo Savari.

Convoys of VIPs held up

When the Dasara Procession finally left Mysore Palace, the convoys of VIPs including those of CM and Dy.CMs had a tough time to come out of the Palace premises as the exit gates were all blocked by people watching the procession. When the convoys switched on the sirens, the irate crowd resisted the preferential movement of VIPs who were stuck for more than 15 minutes. The Police managed to get the Jayamarthanda Gate of Palace opened to let off the convoys.

Realising that many women bring along their infants to watch the procession, District Administration had established temporary baby-feeding centres on the route to facilitate the nursing mothers which earned a good appreciation from the people.

Asthana Sangeetha Vidwan V. Nataraj regretted that he was prevented by the Police from joining the ‘Mangala Vadya’ team going just ahead of the Ambari elephant. Nataraj, who was coming behind the elephant from Palace premises, was topped by Cops at the North Gate. Nataraj claimed that he has been participating in Dasara procession for the last several decades and regretted that he was prevented this time indicating that it is humiliation of a noted artiste. Later, Nataraj was let out by the Police by opening the gate.

Several youths had climbed the trees at the premises of K.R. Hospital and sitting on the branches to watch the procession. One of the tree branches yielded because of load and one person was injured and admitted to K.R. Hospital.

The said branch actually fell on a shamiana erected by International Lions Club brining down a portion of the shamiana. The Lion members sitting inside the shamiana however had a providential escape. Despite repeated warning by the Police, many people were seen sitting precariously on all dilapidated building to watch the procession.

Only ten elephants took part in the procession with three new elephants Eshwara, Jayaprakash and Lakshmi staying back. Eshwara from Dubare camp had not acclimatised to the noises of vehicles on the road and used to become restless.

As a precautionary measure, Eshwara and the other two new elephants Jayaprakash and Lakshmi from Rampura camp were held back from going in  the procession.

Elephant Dhananjaya, who too seemed disturbed by the sound, managed to join the herd and go along in the procession.