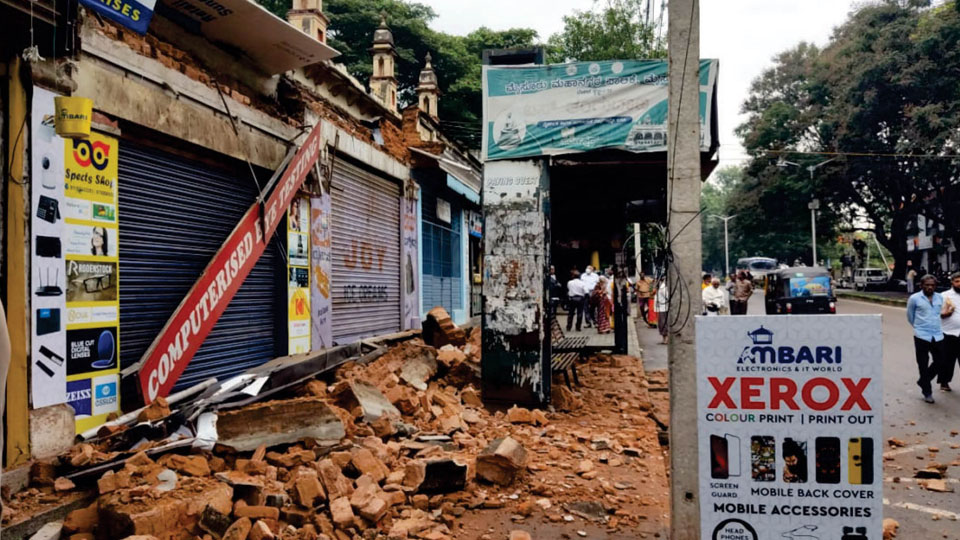 Mysore/Mysuru: The city’s Vani Vilas Market Tenants Association has blamed the negligence of Mysuru City Corporation (MCC) authorities for the sorry state of heritage structures such as Devaraja Market, Vani Vilas Market and Mandi Market which come under the control of the MCC.

In a press release, Association Secretary Shivakumar said that the markets were built by the erstwhile Mysore Maharaja Nalwadi Krishnaraja Wadiyar  decades ago for the benefit of public. Pointing out that the market buildings are listed as heritage structures and have stood the test of times for nearly a century, he said that these heritage structures, which are unique in architectural character and style, are regarded as a pride of Mysuru.

Noting that all the three Market buildings are maintained by the MCC which began functioning under its current name 39 years ago, Shivakumar alleged that the MCC, which collects rent from tenants, was doing little for  regular and proper maintenance of the buildings.

Accusing the MCC of flouting all  Government rules and norms in respect of maintenance of the market buildings and also non-compliance of other Government guidelines, he maintained that failure to carry out regular maintenance works such as white washing, chemical coating, execution of other minor repair and related  conservation works, had resulted in these structures turning dilapidated with the passage of time.

Stressing on the need for the MCC to properly maintain and conserve all buildings that come under its control, he said that all elected representatives, irrespective of their party affiliations, should come forward for saving these structures from deteriorating further.

Contending that these structures built by the erstwhile Mysore rulers are not just Government buildings, but a prized possession  of the people of the State, Shivakumar wanted the Government to form a Committee for overseeing conservation of the Market buildings.