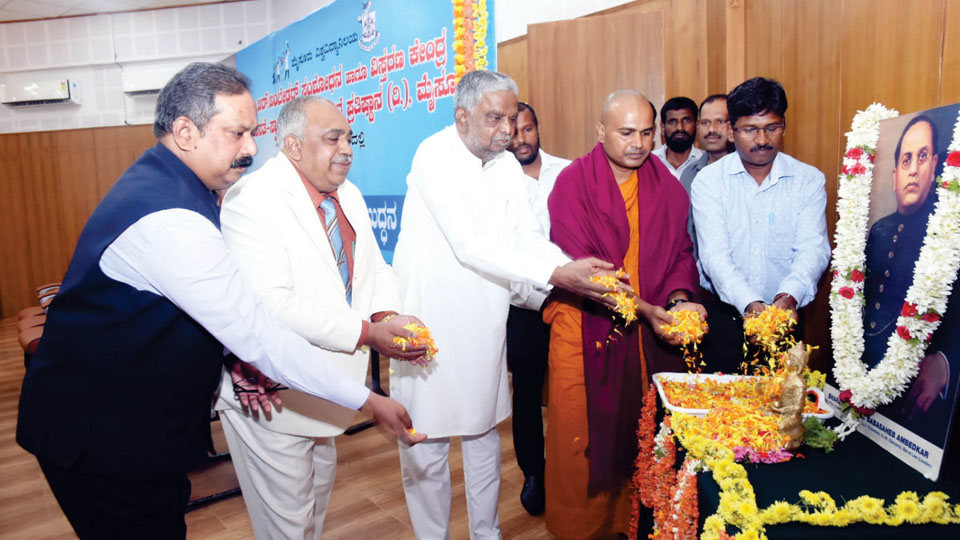 He was speaking after inaugurating a special lecture on “The importance of Buddha’s teachings to contemporary world” organised by UoM’s Dr. B.R. Ambedkar Research and Extension Centre as part of Buddha Poornima at its Vishwajnani auditorium in Manasagangothri campus here on Monday.

Pointing out that there are Study Centres in the name of Mahatma Gandhi, Basaveshwara, Mahaveer Jain and Kuvempu, Prasad said that the current Dr. Ambedkar Research Centre came up with MP funds on the site provided by UoM. Likewise, the University should earmark a site for Buddha Centre and the funds for its establishment will be sourced from elsewhere, he said.

Maintaining that a casteless India existed only during the time of Gautama Buddha, Sreenivasa Prasad opined that Buddha is not a ‘Mokshadaata’ but a ‘Maargadaata.’

Contending that Buddhism came into existence once again in India only through Dr. Baba Saheb Ambedkar after the eras of Emperors Ashoka and Harshavardhana, the MP said that this was the reason why Buddha and Ambedkar are compared on similar terms. Buddha is not only the leading light of Asia but of the entire world as well, he added.

Replying to the MP’s demand, UoM Vice-Chancellor Prof. G. Hemantha Kumar said that the University has started separate courses in Buddha Study Centre from the current year, for which several students have enrolled.

Noting that lectures are being organised on every Friday, he said that the Centre should work towards gaining international fame, for which the University will provide necessary support, including allotment of land for the Centre in the University campus.