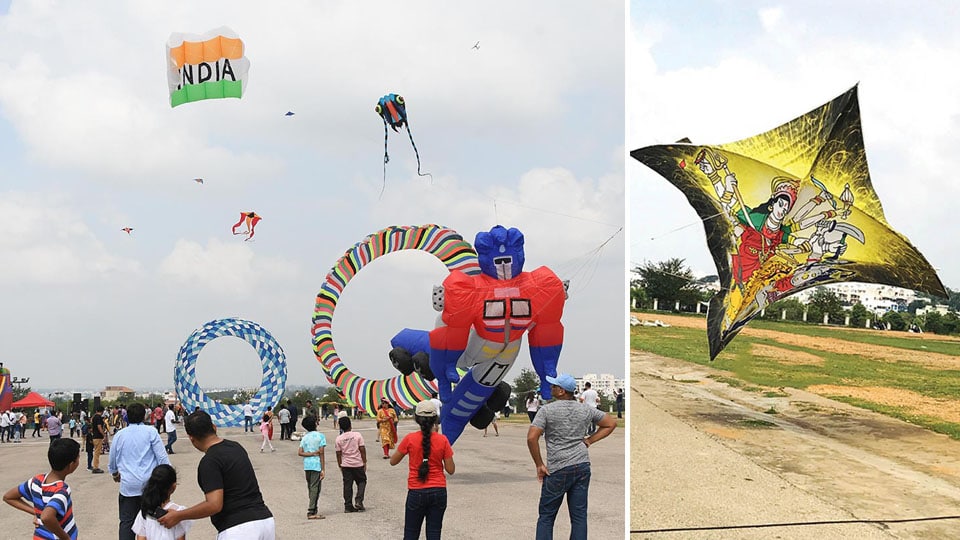 The two-day Mysuru Dasara Kite Festival, which began last evening, witnessed many people flocking the sprawling Lalitha Mahal Helipad Grounds to enjoy the kite flying culture which has been an integral part of Indian tradition. Kite flying is no child’s play. It requires talent, skill, creativity and science.

This morning, kites of various hues, types, shapes and designs dotted the city skies. Team Mangalore, which has been holding up the culture of kite flying since 1966, took centre-stage this morning by displaying a wide variety and exquisite design kites.

Sarvesh Rao, one of the members from Team Mangalore, speaking to Star of Mysore said, “We expertise and concentrate on traditional kites and our designs exhibit Indian culture like dance forms. Our kite depicting Kathakali dance form had entered the Limca Book of Records for the largest kite in India. We also received the Best International Kite Award in the International Kite Festival held at Cleethorpes, UK in 2007. As a hobby group, we promote kite flying as an exciting outdoor activity among youngsters and bring innovativeness and spontaneity. So we regularly conduct workshops for children and also conduct our own kite events. It is very encouraging to see so many kites from teams today.”

He adds, “about 6 teams are taking part in the kite flying competition today. The teams have come from Mangaluru, Hyderabad, Bengaluru, Dhanu (Maharashtra), Rajkot and Surat.”

V.K. Rao, a member from Kite Club India, Bengaluru, said, “We have prepared many types of kites, especially for Dasara Festival. Our main kite is a 15 X 15 feet kite that carries the message ‘Mysuru Dasara Swagata’ (Welcome to Mysuru Dasara). We  have a huge kite that carries the message to save nature and protect earth. We are also displaying Stunt Kites, Series Kites, Dragon Kites, Ring Kites etc. The Stunt Kites are of three types. We have one that gives out a fog, the other has a tail and one is without the tail. The Dragon Kite that we fly has a fire effect at its end and thus it is a night-flying kite. We have a special 3D Kite too for the occasion. Since yesterday we have been flying kites of various varieties and shapes like Octopus Kite, Pilot Kite, Ring Kite etc. We have done kite flying in Kannada  movies like Galipata and Sipayi and also for election campaigns. We practice kite flying and making at HMT ground in RT Nagar.”

READ ALSO  Fly from Bengaluru to Mysuru in 40 minutes from Oct. 10 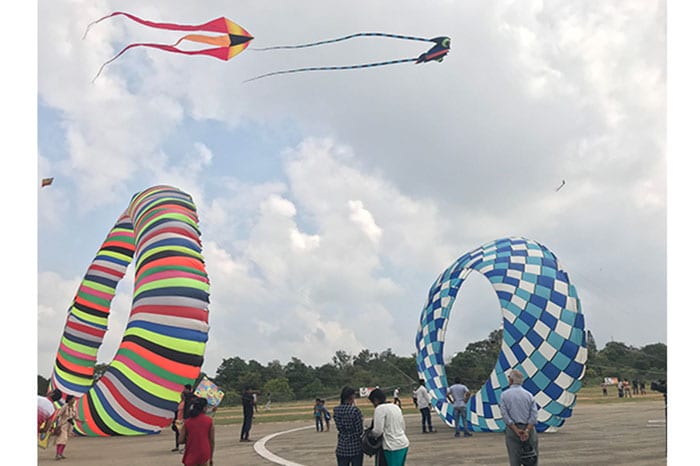 Dreamz Kite Group from Surat had prepared a special Cobra Kite and an Inflatable Kite.

Ramya, one of the visitors who came to witness the event said, “It is very pleasing to see the kites flying in the air. It makes me curious about how these kites are designed and how attractive all of these look when they fly together. Other Mysureans, kids and families brought their own kites and enjoyed flying them high in the sky in a Kite Flying Extravaganza that concludes this evening. 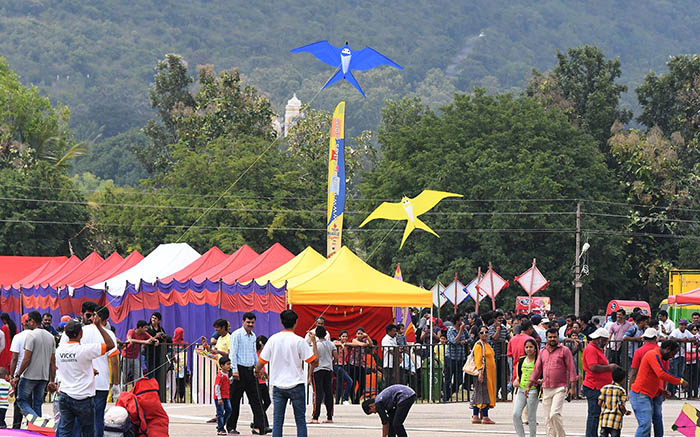 The Kite Festival, organised  by the District Administration and Department of Tourism as a prelude to Dasara celebrations, was inaugurated yesterday by District Minister G. T. Devegowda  in the presence of Housing Minister U.T. Khader, MLAs Taveer Sait, Ashwin Kumar, Harshavardhan and L. Nagendra and Mysuru DC Abhiram Shankar. 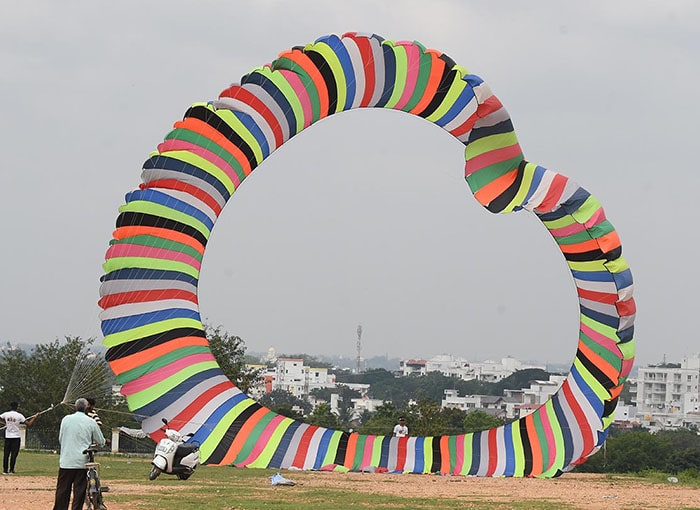 Enthusiastic participants flew over 150 varieties of kites amidst music by Stone Age Band when the event took off.  Thirty professional kite flyers of different teams are showing off their skills at the fest. They flew kites of all shapes and sizes for more than four to five hours yesterday.  Kids took delight in wild animals and birds that flew high in the sky. Participants also exhibited the kites depicting cultural tradition of Dasara. Kite flyers, however, were disappointed a bit in the evening, when poor wind did not allow them to showcase their flying skills.

Youths, in particular girls and children who participated in large numbers, took selfies thrilled by the magnificent fireworks of LED Kites and other varieties.

While ice-cream and cucumber vendors did a roaring business at the venue, children enjoyed some fun games and people made a beeline for food trucks serving traditional girmit, chokri chat, paav baaji,  momos and other lip-smacking snacks.