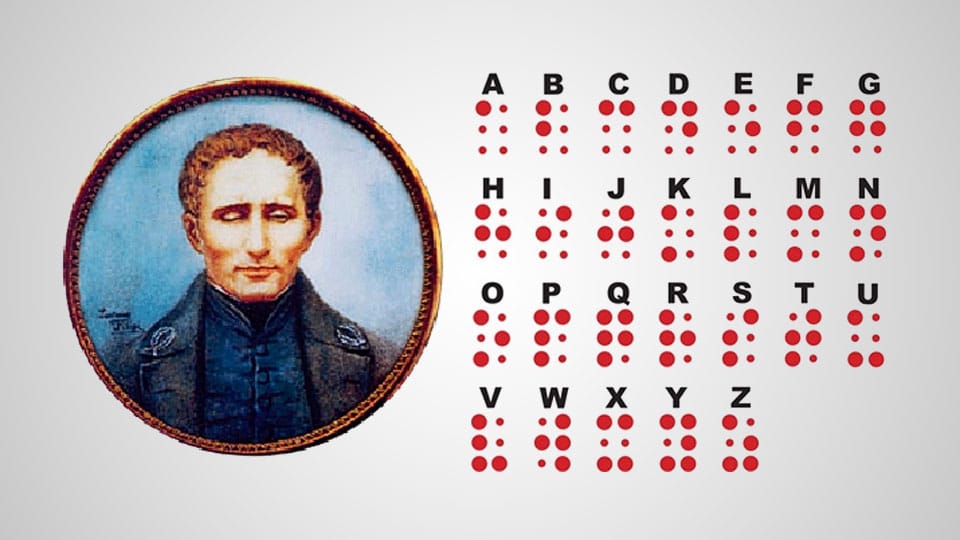 Recently a coin collector gave me a nickel coin and requested me to write about this coin for the consumption of the general public. It is quite possible that people might have used this coin for small transactions even without looking into either side of it. The obverse (main) side contains the picture of Louis Braille with the writing in Roman as well as Devanagari (Hindi) scripts. Below on both sides of the portrait are dates 1809-1852, obviously the date of his birth and death respectively.

Also on both sides in small letters are small dots in geometric fashion. The reverse side contains words Bharat – India in Roman and Devanagari scripts. Below it is our national symbol and by the side is the numeral 2. Below the national symbol is written Satyameva Jayate in regular style script and finally at the bottom Rupaye in Nagari and Rupees in Roman. This is the description of coin under study.

Under this background an attempt is made here to study the life and contributions of Louis Braille to the cause of blind people. This brings to my mind a blind violinist by name Shivarudrappa, who was appointed by the Maharaja of Mysore His Highness Sri Jayachamarajendra Wadiyar for playing violin till the Maharaja retired to the sleep. This was years ago, may be half a century ago. Shivarudrappa was given a free lodging in what is now known as Sitavilasa Choultry in city by the Palace. The famous violinist is no longer there nor His Highness but their memories remain amongst people of Mysore for their respective contributions.

Now let us come back to Louis Braille. For reasons not clear to us now, young boy Louis became blind but he did not sit idle cursing his fate. He thought the blind also should come to the mainstream by joining schools and colleges and work like normal people. In 1825, he invented a script which contained six dots. He tried this script in musical notes as well as in mathematics. The authorities of the school in which he studied requested him to be a faculty and he accepted the offer so that he could be of some service to the unfortunate blind community. Though he was teaching this script, the authorities of this school did not recognise the importance of this script.

In the meantime he died and after his demise the school began teaching it to the students. Observing the success and popularity of this script, French government recognised this script and consequently all schools and colleges in France began using Braille script.

In 1861, one of the schools for the blind was opened in London and it used Braille script. Further progress was achieved when a medical doctor T.R. Armitage, who was also blind, established an organisation for the blind. He prepared books using Braille and supplied them to all blind schools in England. It had some difficulties in the beginning but they were overcome gradually and by 1932 Braille script was in use all over the world.

However, this script entered India by 1890. Originally it was used for English language. But subsequently many Braille scripts of regional variations came into existence. They are Shariff Braille for Urdu and Hindi languages. For Tamil, it was Askvit Braille; Neelakantaroy Braille for Marathi, Bengali and Gujarati; for Oriental region it was Oriental Braille. For Kannada, it was Mysore Braille.

But unfortunately there was no unanimity among the above various Braille scripts and it caused great confusion among its users. It was cumbersome and expensive for printing Braille books. Considering all these difficulties, experts gave a short note to Government of India for implementation. Hence in 1941 a Committee was constituted which gave its report in 1943 emphasising a common Braille for the entire country. But it also had some flaws. The then Education Joint Secretary Humayun Kabir wrote a letter to the Director-General of UNESCO requesting him to prepare a common Braille script for all the regions of India. This request was made in April 1949.

The UNESCO Director-General could not take a decision in this matter as it was highly technical and hence he constituted a Committee under the Chairmanship of Klutha Meckenzie. This Committee met the representatives of all the various regions of India and after a detailed discussion, invented Bharati Braille which would be useful for all the fourteen important languages of India. This came into vogue in 1952 and from then onwards it is being used throughout our country. Thus Indian (Bharati) Braille script is a milestone in the history of Braille which is in use for all the major fourteen languages of India.

The next development was invention of Braille script typewriters. Clocks and watches of special nature have also been developed for the blind. Then came Braille maps to understand and locate various places and cities of the world. In addition, special scales have also been developed to measure height, length, breadth, etc. These have been useful for daily work in their class rooms. Thus all these developments have become a great boon to the blind.

Now Braille Printing Presses have been established in different places of the world. They are printing Braille books and supplying them to students and they are located at Kolkata, Mumbai, Delhi, Dehradun, Chennai etc. It is a happy thing to note that our own Mysuru city has a Braille Printing Press, a Government School for the Blind in Tilaknagar among other private schools like Ranga Rao Memorial School for Disabled, a residential school for visually challenged girls of economically weaker section.

All these were possible because of the efforts of Louis Braille and the entire world should be grateful to this savant. It is also our duty to pay homage to the Inventor of Braille Script.