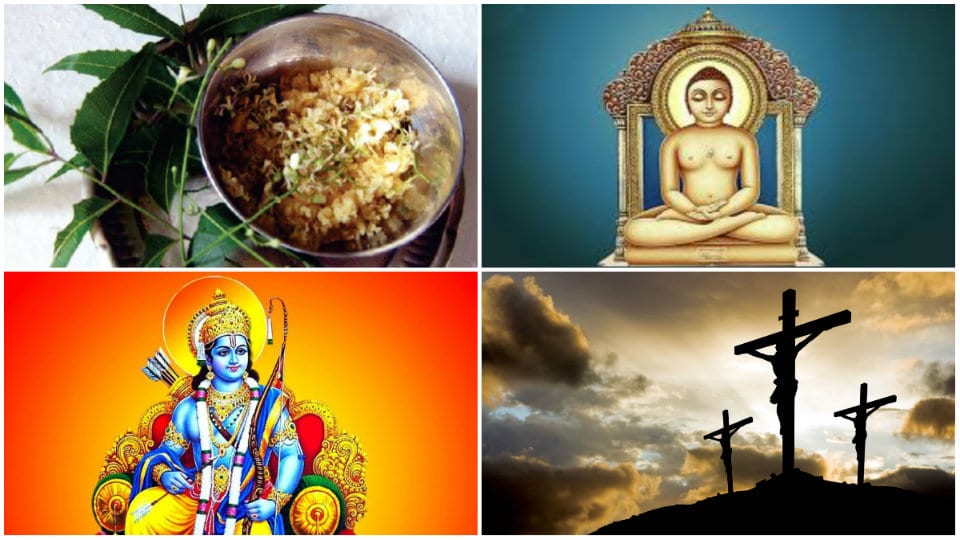 Four festivals in a row

Once the festival season begins, they come with a bang and these festivals are celebrated all over the country with devotion. The methods adopted may look different but the inner motto is to remember the divinity. This actually happened during the latter fortnight of this month. These four festivals were Ugadi, Sri Rama Navami, Mahaveer Jayanti and Good Friday.

While Ugadi and Rama Navami were celebrated by Hindus, Mahaveer Jayanti was observed by Jains and Good Friday by our Christian population. This is also a good example for unity and diversity which is the hallmark of our culture.

Now let us take these festivals one by one for a detailed study. Naturally, Ugadi occupies the first place because it is the beginning of Hindu cyclic New Year. The word Ugadi is a Kannada form of Sanskrit word Yugadi. Yuga here should not be taken in its literal meaning of yuga, like Kaliyuga, Dwapara Yuga etc. Yuga here means a time-span which can be measured. Though time is immeasurable according to our tradition, it has been measured by Hindu years.

In India, there are three systems with regard to Ugadi. The first one is Chandramana (reckoning based upon Moon), Sauramana (reckoning based upon the movement of Sun) and finally Barhaspatyamana based upon Brihaspati (Guru). The people South of the Vindhyas follow Chandramana or Sauramana. People North of the Vindhyas follow Barhaspatyamana. Karnataka and Andhra follow Chandramana while people in Tamil Nadu follow Sauramana. Whatever may be the reckoning, Ugadi is a big festival that can easily be compared to Deepavali or Navaratri.

Whatever may be the system on the day of Ugadi people take oil-bath, wear new clothes, worship their personal deity and have good traditional food in which Obbattu is a must. Before doing that they eat neem leaves with jaggery, with a verse praying almighty for giving good and long life. There is also a message in this. Neem is bitter while jaggery is sweet which symbolises that people should not become depressed in troubles and get elated in times of happiness. Another important duty on that day is to buy the new Panchanga or almanac. Now we have entered into Vilambi Annual Year bidding good-bye to the Year Hevilambi. Thus we have all celebrated Ugadi on 18th of March according to tradition in vogue from time to time, and wait for next year’s Ugadi.

Sri Rama Navami is dedicated to the evergreen memory of Sri Rama who is considered as Maryada Purushottama, roughly translated as honourable best human being. Researchers have shown that Sri Rama was not a mythological figure but a person in flesh and blood. Many of the places mentioned in Valmiki Ramayana have been identified by late Dr. B. B. Lal and others.

Ramayana is perhaps the best known epic poem written in India. It has been translated into many languages and many works like Kamba Ramayana, Vasistha Ramayana, Adhyatma Ramayana have been composed. The message of Ramayana is to adhere to truth at any cost and that is the reason why Gandhiji was a great admirer of Sri Rama. The fame of Sri Rama went beyond the boundaries of India like Java, Sumatra, Bali, Borneo, Angkor etc.

The present generation may not know an interesting incident that took place. Sri Rama was considered as an Aryan while the people in Tamil Nadu were Dravidians and were not prepared to worship him. This was put to an end to by the then Prime Minister Nehru. Thus Ramayana has become a symbol of India.

Now we may pass on to Mahaveer Jayanti. Mahaveer, the Jain Saint, is considered as the twenty-fourth Tirthankara (holy saint). It is generally believed that he lived during 599-527BC. A native of Magadha State, Mahaveer was born in 599 BC to parents Siddhartha and Thrishaladevi. As soon as he was born there was prosperity and hence he was named Vardhamana. However, some saints on seeing his prowess and divinity gave him the new name Mahaveer by which he is now universally famous.

By birth itself Mahaveer attained Spiritual Knowledge. He renounced the worldly pleasures which were also temporary. He did penance for twelve years and at the end of which he received the divine knowledge (Kevala Jnana), that means he attained knowledge of divinity in all its glory. Finally, he got control over the senses of pleasure and became a saint par excellence. After getting the divine knowledge he felt that it should be made known to all the suffering people which he had experienced during his meditation. He did this for the benefit of suffering human beings. Thinking that the purpose of his life has been achieved, he cast off his body around 527BC in Pavapuri Lake near Patna on the Ashvayuja Bahula Chaturdashi during the early hours on a new moon day. Thus Mahaveer became immortal and his Jayanti is being celebrated annually and this year it was celebrated on 29th of this month, in all Jain temples also called as Basadis by performing rituals. Thus people paid homage to him on that day.

Finally, we come to Good Friday observed by Christians all over the world wherever Christianity is followed. It is actually the annual ceremony of the death of Jesus Christ. It falls on the previous Friday of Easter. People suspect it was originally called Gods Friday and in course of time it became Good Friday. There is a variety in its celebration among the various sects of Christianity. The Protestants generally recite the holy verses. The Roman Catholics go to the churches on the evening of Thursday and prayers are offered till the evening of Friday. This is coupled with reading the Bible and reciting the holy verses in local languages. Thus ultimately the result has to be in communion with Jesus Christ and think of him throughout those two days. The churches are decorated well and particularly serial lights are used to decorate the churches during the night. This year Good Friday was celebrated on 30th of this month.

Thus this fortnight of March has a combination of celebrations of Hindus, Jains and Christians and that is how in a democratic country like ours people have religious freedom. Every Indian hopes that this will continue for a long, long time to come.