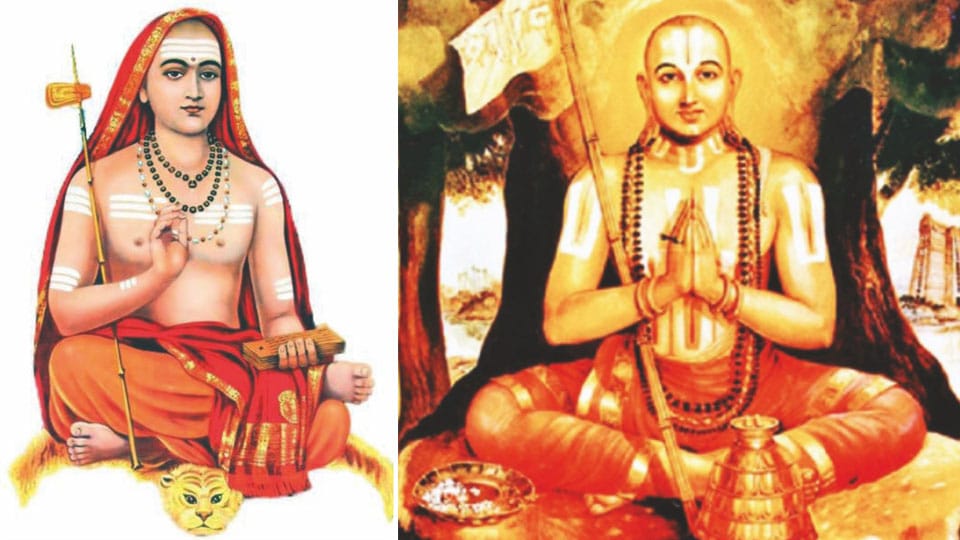 Last week on two consecutive days (20th and 21st April) were celebrated the Jayantis (birthdays) of two great savants namely Sri Adi Shankaracharya and Sri Ramanujacharya. The uniqueness about these two acharyas is that they were born outside Karnataka but their religious activities were mostly confined to South India in general, Sringeri, Melukote and Srirangam in particular.

There lived in Kalady or Kalati in Kerala on the banks of river Poorna (near modern Cochin) a pious husband and wife Shivaguru and Aryamba belonging to Nambudari Brahmin family. In course of time was born to them a son named Shankara.

The boy Shankara was attracted towards spirituality. In the meantime Shankara’s father died. But his mother performed the upanayanam of Shankara when he was just five years old and sent him to a Gurukula for Vedic studies. The boy completed studies and returned to Kalady. As a Brahmachari his daily duty was to beg food from house holders. One day he went to a house in which the woman had nothing to offer except Indian gooseberry (nellikayi) and Shankara took it from her and prayed to the Goddess to shower blessings on this poor woman and a miracle happened in the form of a downpour of golden gooseberries.

The young Shankara began teaching students at Kalady. Shankara saw his mother fetching water from Poorna River with great difficulty. He prayed to Goddess and the river changed its course and began flowing near her house. One day while bathing, a crocodile caught his leg and Shankara requested his mother to give permission to become a Sanyasi (monk). After this, the crocodile left him. He was just eight years old and came out of the water and consoled his mother. Finally he took to regular monkhood and left his mother. He wandered all over India.

The young Brahmachari went to Badarikakshetra and wrote commentaries on Brahma sutras. Thus Shankaracharya moved all over India. In the meantime he remembered his promise to his mother and returned to Kalady and he performed the last rites to her. Then he established four Mutts at four cardinal ports at Dwaraka, Puri, Badari and Sringeri. There is no authentic data regarding his Mukti (death). It is said that he walked up to Kailash and disappeared. It is believed that he lived just for 32 years between 788 and 820 AD. He settled down in Sringeri on the banks of Tunga River and established Sharada Peetha and it is being continued by illustrious Jagadgurus.

The teaching of Adi Shankara is called Advaita (non-duality). Atman and Brahman are not two different identities. They are one and the same and we do not understand this because of Maya (illusion). Once the illusion is gone, one can attain Moksha.

Now we may turn to the other savant namely Sri Ramanujacharya (1017-1137AD), the exponent of Vishistadvaita or qualified monism. He was born in Sriperumbudur near Chennai in 1017 AD to father Keshava Somayaji and mother Kanthimathi. He got married to Rakshambal when he was just 15. His father died and subsequently he got education in Kanchipuram under Advaita scholar Yadavaprakasha. Sri Ramanuja had difference of opinion in academic matters and he left him and began thinking on his own. Meanwhile, Sri Yamunacharya passed away and Sri Ramanujacharya was brought to Srirangam. In fact it was Sri Ramanujacharya who inaugurated the new system of writing commentary in Tamil Language.

After sometime he left Kanchipuram Mutt and came to Srirangam. He got initiation into spiritual life with a holy formula from Acharya Goshtipoorna. After getting this holy mantra, the Guru told him that it is sacred and hence he should not divulge it to anybody. But he gave this mantra to all the people assembled there. He was told that he will go to hell for having done this sacrilege. But he replied that it does not matter if he goes to hell as long as common people get benefitted. That was his liberal outlook. To escape the wrath of the Chola King, Ramanujacharya came to Hoysala Kingdom where he was welcomed by Hoysala Bittideva and he became a disciple of Sri Ramanujacharya and got the new name Vishnuvardhana. As desired by Sri Ramanujacharya, king Vishnuvardhana built Channakeshava temple at Belur, Kirtinarayana temple at Talakadu, Veeranarayana Temple at Gadag and Cheluvanarayanaswamy Temple at Melukote.

Sri Ramanujacharya came to Melukote and stayed there for about 14 years. Through his discourses he propagated qualified monism. Among his works Sri Bhashya and Geetha Bhashya are important. Sri  Ramanujacharya cast off his body in 1137AD.

After the demise of Sri Ramanujacharya, his followers were divided into two groups Tengalai and Vadagalai, with some minor differences. Ramanujacharya gave importance of Bhakti or devotion to God Narayana. He became a champion of Bhakti school of thought. His contribution is liberalization of the caste system and allowing Scheduled Caste people to be his disciples and assuring them Moksha if they practiced true Bhakti.