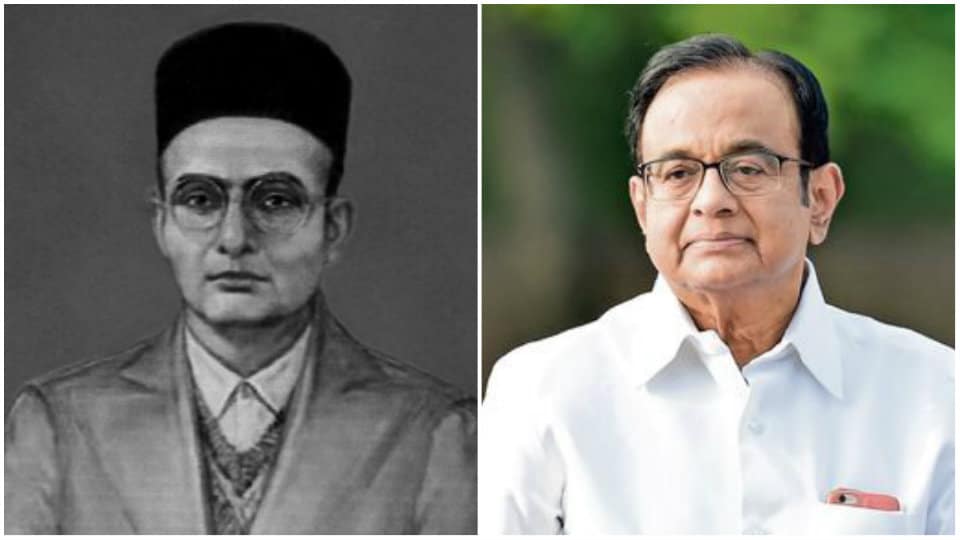 In the ever-changing electoral fortunes of the world’s largest Democracy, it is a Historian’s hope that the legacy of Savarkar and of men like him, do not become political footballs in the ugly arena of toxic public life.

And as a Journalist, it is my hope that this reinstalled plaque of Savarkar would not be removed when and if the Congress or UPA Government comes to power and worse with the same vindictive person Mani Shankar Aiyar as a Minister in that Government.

With the Assembly polls underway in Maharashtra, almost forgotten freedom fighter Veer Savarkar seems to have come back to life and news. The BJP manifesto for the election has promised ‘Bharat Ratna’, the highest civilian award, posthumously to Veer Savarkar. If there ever was a controversial, yet popular, freedom fighter after Netaji Subhas Chandra Bose, in his own way, it was Vinayak Damodar Savarkar, popularly known as Veer Savarkar.

Many feel that Savarkar was not given the recognition and the honour that he richly deserved as a patriot and a nationalist who fought for the freedom of the country from a very young age sacrificing his personal career and family. Accounts of his courageous and stormy life challenging the authority of the British Rulers have already appeared in many publications. However, the Congress Government when in power considered him more as the eighth accused in the Mahatma Gandhi assassination case and, therefore, not deserving of any reverence, much less honour bestowed upon him as a frontline freedom fighter. The fact that he was acquitted in the case did not matter to the Congress.

As a freedom fighter Savarkar suffered many years of incarceration in the Cellular Jail of Andaman and Nicobar Islands in solitary confinement and later in mainland India. It was Veer Savarkar who postulated the essence of being a Hindu  in India and his duties to the motherland. He also defined in detail the word ‘Hindu’ as also ‘Hindutva’ ­— what it means.

About four years back I had been to Andaman and Nicobar Islands more to see the dreaded Cellular Jail than the natural beauty of those Islands. The immediate provocation for my visit was the re-installation of a plaque in July 2015 carrying the name of Veer Savarkar and a quotation from his writings by the then Governor of Uttar Pradesh Ram Naik. It must be mentioned that the same Ram Naik was the Petroleum Minister in Atal Bihari Vajpayee’s  NDA Government who had installed that plaque in honour of Veer Savarkar.

This re-installation of the plaque has its own history of political vindictiveness on the part of the Congress Government which came to power in 2004 after defeating BJP (NDA).

Mani Shankar Aiyar, the Petroleum Minister in the Congress-led UPA Government, had got the plaque removed making several disparaging comments about the inmate of the Cellular Jail Veer Savarkar, the freedom fighter, justifying the move to displace the memorial. This created pandemonium in both Houses of Indian Parliament as the then Opposition Party — BJP — demanded restoration of the plaque and an apology from Minister Mani Shankar Aiyar.

However, the Opposition was told in no uncertain terms that the UPA Government had no intention of revoking this decision and naturally the apology demanded did not come. But then, there seems to be an inscrutable way of God or Providence or Nature (whatever you may call the invisible power that guides our destiny) to get a historical wrong corrected, thus history taking a full circle.

With the coming back to power of the Bharatiya Janata Party (BJP) under Narendra Modi’s leadership in 2014 the displaced Veer Savarkar’s plaque at the Cellular Jail was reinstalled in July 2015 exactly 11 years after it had been removed by the UPA Government.

Interestingly, as I mentioned earlier, the same Ram Naik, who had first installed it as a Minister of Petroleum, re-installed it this time as the Governor of Uttar Pradesh. History seems to have come a full circle.

The remark of Vikram Sampath, who has written a beautiful biography of Savarkar, has expressed a Historian’s hope in his prologue to the book as follows, “In the ever-changing electoral fortunes of the world’s largest democracy, it is a Historian’s hope that the legacy of Savarkar and of men like him, do not become political footballs in the ugly arena of toxic public life.” And as a journalist it is my hope that this plaque would not be removed when and if the Congress or UPA Government comes to power and worse with the same vindictive person Mani Shankar Aiyar as a Minister in that Government.

Now, let me give another example where history seems to have come a full circle. It is about P. Chidambaram who is in jail as I write this.

The BJP then accused Chidambaram of misusing the CBI. Congress is levelling the same allegation now against BJP.

The UPA Government then was ruthless and determined to destroy Amit Shah as a politician and as an individual. Consider these reported facts.

Allegations were levelled that the encounter was staged after getting the nod from Amit Shah. The case, on the direction of the Supreme Court, was transferred to the CBI in January 2010. Chidambaram was the Union Home Minister at that time.

Six months later — July 2010 — Amit Shah was arrested by the CBI in Sohrabuddin encounter case and slapped with charges of murder, extortion and kidnapping. When he applied for bail, the CBI opposed the move in the Gujarat High Court arguing that Amit Shah might use his political influence to tamper with the evidence or threaten witnesses.

Three months later — on October 29, 2010 — Amit Shah got bail from the Gujarat High Court. The next day, when the court was closed for weekend, the CBI approached the Supreme Court at the residence of Justice Aftab Alam, who externed Amit Shah from Gujarat. Amit Shah was barred from entering Gujarat for two years — 2010 to 2012.

Amit Shah accused Chidambaram and the Congress of misusing the CBI to target political opponents. Amit Shah was cleared of all charges in December 2014 by the CBI. The Narendra Modi Government was in place by this time (Modi became PM on 26th May 2014).

The BJP declared that Amit Shah was innocent yet harassed by the Congress-led Government. Interestingly, the Congress is making the same claim about Chidambaram’s involvement in the INX Media case.

History seems to have come a full circle. A case of divine retribution? Good people may fail in punishing the evil, but then there is always a God who will punish. It is called                        Divine Retribution.

5 COMMENTS ON THIS POST To “Veer Savarkar and P. Chidambaram: History seems to have come full circle”