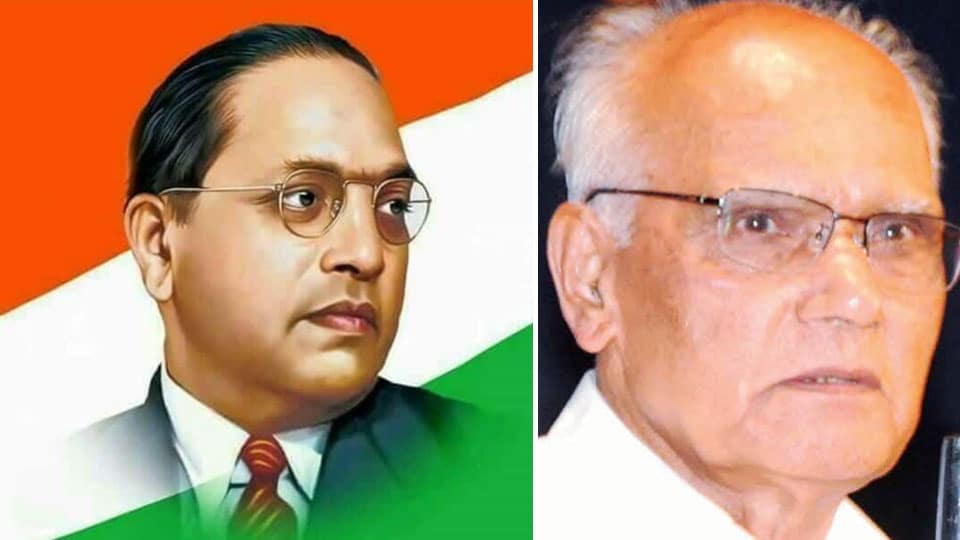 The sea is dangerous and its storms terrible, but these obstacles have never been sufficient reason to remain ashore.”— Ferdinand Magellan, Portuguese explorer (1480-1521)

As I mentioned yesterday in this column,     Dr. S.L. Bhyrappa, as if inspired by the philosophy of the Portuguese explorer Ferdinand Magellan quoted above, refused to “remain ashore” and watch the agitations and the disorder that followed as a result. He decided to challenge the agitators by questioning the justification of their opposition to the Citizenship Amendment Act (CAA) democratically passed by the Parliament by calling a press conference. What he had said in that press meet was widely covered by newspapers and media in general.

Yesterday, I had alluded to what Dr. Bhyrappa had said and dwelt on the subject generally concluding that it would be both relevant and pertinent at this juncture to remember the thoughts and statements of India’s one of the greatest thinkers on issues relating to Indian society, caste system, religions and politics — Dr. B.R. Ambedkar. No wonder he created a well-structured people’s Constitution which, despite over a hundred amendments in the past 73 years, has still remained steadfast like the Rock of Gibraltar holding on to its fundamental features.

Be that as it may, in my opinion it is right time in today’s India to recall some of his wise utterances about the vivisection of India on the basis of religion — Islam and Hinduism — and about maintaining and preserving our democracy. As we know, he was the author of the most insightful book on partition titled “Thoughts on Pakistan” written before partition in 1940. According to the book, Dr. Ambedkar had suggested a “sovereign remedy” for securing peace and homogeneity by “arranging for a total exchange of population, Hindus from Pakistan and Muslims from Hindustan as did Turkey, Greece and Bulgaria to solve their internecine wars.” Of course, this prescription apparently was not accepted. Finally, partition took place along with the catastrophe the people suffered.

And when Dr. Ambedkar’s turn came to speak, it was a speech which drew great appreciation and applause from all the members of the Assembly and was considered one of the best speeches of Dr. Ambedkar on such a profound subject.

Now let me quote Dr. Ambedkar about how he looked to the future of the country and his anxiety. It seems as if he had already foreseen what is happening today in our country. Let me quote from the book on Dr. Ambedkar by Dhananjay Keer:

What perturbs me greatly is the fact that India has not only once before lost her independence but she lost it by the infidelity and treachery of her own people. In the invasion of Sindh by Muhammad-bin-Qasim, the military commanders of King Dahir, accepted bribes from the agents of Muhammad-bin-Qasim and refused to fight on the side of their King. It was Jaichand who invited Muhammad Ghori to invade India and to fight against Prithviraj and promised him the help of himself and the Solanki Kings. When Shivaji was fighting for the liberation of the Hindus, the other Maratha noblemen and the Rajput Kings were fighting battles on the side of the Mughal Emperors. When the British were fighting the Sikh rulers, their principal commander sat silent and did not help to save the Sikh Kingdom. In 1857, when a large part of India had declared a war of independence against the British, the Sikhs stood and watched the event as silent spectators.”

“Will history repeat itself?” he asked the House. He, therefore, urged the people of India to resolutely guard against the eventuality of parties placing their creed above the country or else “our independence will be put in jeopardy a second time and probably be lost for ever. We must be determined to defend our independence till the last drop of our blood.” (Cheers.)

He then turned to the ways of maintaining democracy.

1. He said that the first thing they must do was to hold fast to the Constitutional methods of achieving their social and economic objectives and abandon the methods of civil disobedience, non-co-operation and satyagraha, for those methods were nothing but the grammar of anarchy.

2. Another danger, Dr. Ambedkar felt, arose from hero-worship. He warned the defenders of democracy not to lay their liberties at the feet of even a great man or trust him with powers which enables him to subvert their institution. Turning his attention to irrational blind hero-worship that prevailed in our country he observed: “There is nothing wrong in being grateful to great men who have rendered life-long service to the country; but there are limits to gratefulness. As has been well said by the Irish patriot Daniel O’Connell, ‘No man can be grateful at the cost of his honour; no woman can be grateful at the cost of her chastity; and no nation can he grateful at the cost of its liberty.’ This caution is far more necessary in the case of India than in the case of any other country. For, in India, Bhakti plays a part in politics unequalled in magnitude than the part it plays in the politics of any other country in the world. Bhakti may be a road to the salvation of the soul; but, in politics Bhakti or hero-worship is a sure road to degradation and eventual dictatorship.”

According to the author of the book Dhananjay Keer, the House listened to Dr. Ambedkar’s 40-minute lucid, eloquent and prophetic speech spellbound, punctuating with cheers. The very next day on November 26, 1949, the Constituent Assembly, in the name of The People of India, adopted the Constitution with its 395 Articles and 8 Schedules.

Let all those who are protesting today on the streets of our country remember that the main feature of our Constitution is that sovereignty resides in the people and Parliament as the representative of the people carries the sovereignty.

Tailpiece: According to historian Vikram Sampath, Vinayak Damodar Savarkar, the revolutionary freedom fighter who wrote the book “The Indian War of Independence of 1857”, has suggested “that the 1857 movement was one that brought Hindus and Muslims together; that Hindustan was thereafter the united nation of adherents of Islam as well as Hinduism.”