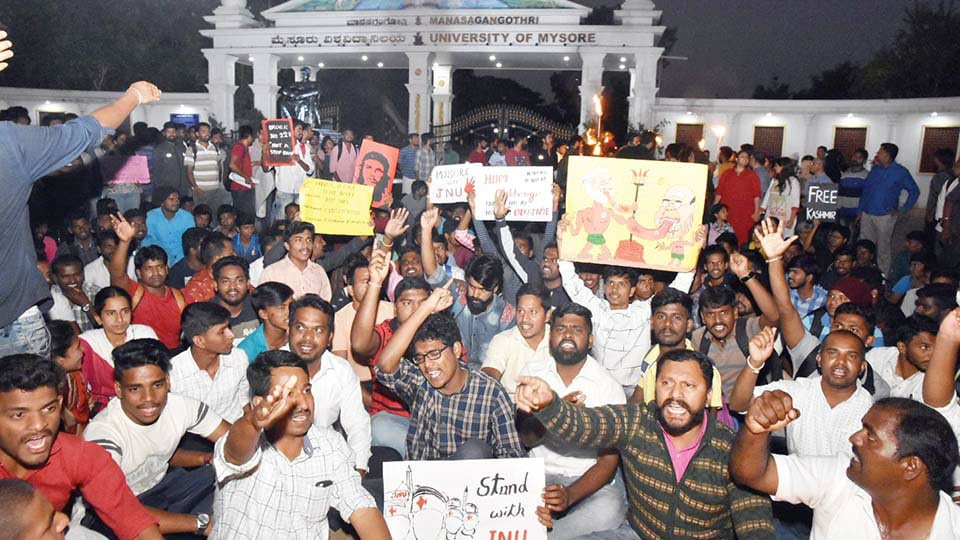 What is happening to our country?  Suddenly, it is a ship drifting in a storm, rudderless and captainless.  The brutality that was unleashed in JNU last week was unprecedented, more in-your-face than the violence that recently rocked Jamia Milia and Aligarh.  The goons, who beat up students and teachers at JNU, were masked. But the Hindu Rashtra Dal assumed responsibility for the violence, confirming that Hindutva zealots were the ringleaders.  The Government backed them by keeping the Police inactive. When the Police moved, it was to switch off the streetlights, perhaps to facilitate the movements of the hooligans. Not a single attacker was taken into custody.  Worse, they filed charges against the Students’ Union leader who had been wounded in the head by a lathi blow.

Never has a Government been so anti-people in India.  For that matter, never has India seen an uprising of people as spontaneous as the one that is currently shaking it.  Young people from across the land have risen with the demand that they be heard. The citizenship law provoked protests that took everyone by surprise. The protests were not organised by anyone in particular; groups of young people went out on their own, thus adding to the significance of the nationwide uprising.  It is clear that people have become disillusioned with the existing order. They want change. They want action such as the removal of JNU’s Vice-Chancellor Jagadesh Kumar whose talent is confined to turning students into enemies.

Foolish Government leaders imagine that people’s movements can be crushed by force.  The UP Government has been more foolish than others. It has been vicious as well. The saffron-clad Chief Minister, in his drive to make the State a model for Hindutva, has been encouraging the Police to pick up Muslims for third-degree treatment.  He threatened that his Government would take revenge (badla) by auctioning off the properties of protestors. Many citizens were sent notices demanding money to compensate for damages caused. Activists who were Muslim were singled out for special treatment.  It is astonishing that there are politicians in this day and age who think they can be crudely communal and get away with it.

They won’t succeed because India is no longer what they think it is.  Young people across the country are showing that a New India is rising.  Even UP will have to recognise this. Drama artiste Ratna Pathak put it magisterially in the course of a recent conversation with a young student.  With a stage actor’s clipped accent and clear-cut verbal punctuations, she said: “This is the first time a generation is actually seeing what it feels like to be misruled.  Your generation is the first real generation that is feeling hopeless. How long will we carry on in this horrible state?” She was optimistic that things would work out right because “I have never seen so many educated people in India, and so many young educated people in India” working for a meaningful India.

Those in power do not want to accept this reality.  They imagine that conflicts and clashes will bring about an ideological showdown that will facilitate the growth of Hindutva.  Hence the support extended to militant forces, often surreptitiously and sometimes openly, by the Government. It’s not just UP. Even the Centre seems ever ready to encourage confrontations.  The violence in the country’s famous campuses is a deliberate attempt to bring those centres of higher learning under the communal umbrella. The Central Government as much as the openly Hindutva lobbies see the countrywide opposition to the citizenship law as a challenge to their hegemonic ambitions.  What they do not see is that the ruthlessness with which they oppose new forces in the country will only strengthen the resolve of the young protestors. Amit Shah-style threats do not wash with this generation.

READ ALSO  A coup that awaits the daring

Resistance will grow if Government persists with suppression policies.  Don’t forget that there are several States in India that are ruled by non-BJP Governments.  Intolerance from Delhi may well accelerate the growth of resistance across the country. Not only will this weaken democracy in India with unpredictable consequences; it will noticeably reduce India’s stock in the eyes of the world. This is already happening. Reports abroad are all about  India becoming divisive and lost in narrow religious confrontationism.

Darkness envelopes the India led by Modi and Amit Shah and Adityanath.  Only light can fight darkness. In Universities across India, young people have lighted candles. They are self-propelled messiahs of change who are not scared of darkness.  They will ensure that light spreads and prevails.

Citizenship Amendment Act Point of View T.J.S. George
‘Fakhruddin Ali Ahmed was made President of India as a reward for building Muslim vote-bank of illegal immigrants for Congress’
Musings on Dr. S.L. Bhyrappa’s defence of CAA — 2

4 COMMENTS ON THIS POST To “Warning: A New Generation Rises”