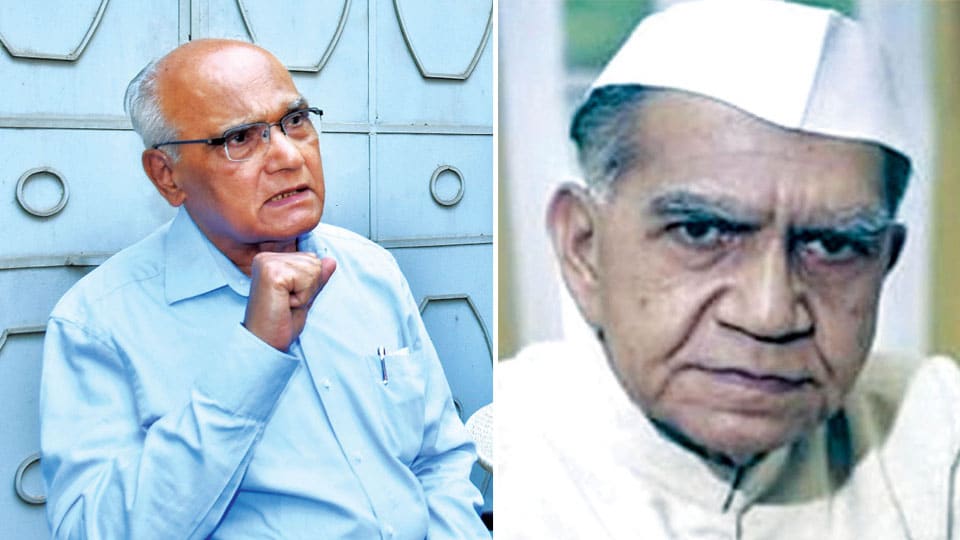 Acclaimed Novelist and Saraswathi Samman awardee Dr. S.L. Bhyrappa has said that Fakhruddin Ali Ahmed was made the President of India in return for his efforts to consolidate the Muslim vote-bank in favour of Congress party. Replying to questions by scribes at a press conference called at his residence in Kuvempunagar on Friday last, he said that although he did not desire publicity, he was compelled to speak on the raging controversy over Citizenship Amendment Act (CAA) and strongly justified Prime Minister Narendra Modi’s decision to implement the Act. Excerpts…

Don’t you think BJP too is towing the Congress line in dividing Hindus and Muslims for votes?

Dr. S.L. Bhyrappa: Yes, the BJP too is towing the Congress tactics of divide and rule policy for the sake of power. All parties should come together for framing rules and regulations, follow the set guidelines and maintain discipline. Otherwise, there is a danger of parties competing with each other in doing what the other party did to remain in power. How can the system be cleansed if this trend continues?

You have said that all parties are one and the same. Then, according to you, what are the choices left for the voters and the citizens?

Dr. Bhyrappa: In my opinion, voters have no say in the elections. Political leaders indulge in influencing the voters through cash and caste. As such, the educated voters have turned indifferent as they believe that their candidate does not win even if they vote en masse. Hence, it has become necessary to cleanse the electoral system itself.

There were protests when Article 370 concerning Jammu and Kashmir was abrogated by the Centre. Wasn’t abrogation of Article 370 a good decision? After the country gained Independence, Fakhruddin Ali Ahmed, a Congress leader from Assam, started bringing Muslims living in the then East Pakistan (now Bangladesh) to the country to work as labourers. The Congress too supported it as it thought that the illegal migrant labourers could become a vote-bank. Even as labourers continued to migrate from Bangladesh, Assam erupted in anguish and the Assamese people started a movement. But ignoring Assamese pride and sentiments, the then Prime Minister Indira Gandhi made Fakhruddin Ali the President of India. He followed the diktats of Indira Gandhi and signed the Emergency Declaration at midnight.

Don’t you think Prime Minister Modi should have called a press meet to clarify on CAA?

Dr. Bhyrappa: There was no need for Prime Minister Modi to call a press meet and clarify. Modi has made known his mind on the issue through his monthly ‘Mann Ki Baat’ and even his party colleagues have often clarified on CAA a number of times. Modi was unfairly targeted by media for the 2002 Gujarat riots when he was the Chief Minister of that State. Even after he was so targeted, Modi won the people’s mandate and ruled Gujarat as the CM for almost 13 years. But still, the media continues to criticise him and as such, Modi does not want to interact directly with the Press. Modi is avoiding the Press as he has found other means of communicating and connecting with the people.

When Indira Gandhi was the Prime Minister, she used to take many presspersons and officials along with her whenever she went on foreign tours. She used to give them gifts to ensure that favourable reports were published in the Press regarding her foreign visits. But Modi is the one who does not follow all these antics and as such, he is being unfairly targeted. It is time, journalists too introspect themselves.

Is it not the responsibility of Modi to clear public misconception about CAA?

Dr. Bhyrappa: It is unfair for the journalists to target Modi alone on this issue. The Union Home Minister has clarified on the issue umpteen number of times and it is not necessary for Modi himself to clarify. Modi is a busy man and an intelligent man too. He is a person who always thinks about the Nation and as the Prime Minister of the country, he has often clarified that Muslim citizens of the country will not be troubled by CAA.

The Congress, which is mired in vote-bank politics, is opposing the Act for its selfish ends. It must be noted here that Muslims have many countries to go including Pakistan and as such, they can go to any Islamic country. In Saudi Arabia, Muslims are given preference in jobs as against non-Muslims. So there is no logic in granting citizenship to illegal Muslim immigrants in our country, exceptions apart. Although everyone knows about the issue, Modi is being particularly projected as communal. It is to be noted that Modi has diplomatically won over many Arab countries. Is it right to call him anti-Muslim?

The Opposition parties by branding ‘Modi Chor Hai’ have brought a bad name to the country. Can we get fuel if we ignore Arab countries? The Opposition parties must think about the impact that their cheap remarks will have on India’s relationship with Arab countries and other nations. But Pakistan, Afghanistan and Bangladesh, who are our neighbours, are a different proposition as they are always a threat to the safety and security of India. However, the case of Hindus in Western countries is different as Hindus are finding jobs there that they find most suitable and there is no religious persecution of Hindus as in these three  Muslim countries.

Was the implementation of Citizenship Law necessary now when the country is going through difficult times on the economic front?

Dr. Bhyrappa: How far can we go on like this? The Citizenship Law should have been amended long ago. No one had bothered to suitably amend and implement the Act even after 70 years. Modi has done it now. Should we drag it on for 20 more years as it was?

Prime Minister Modi has done the job today which actually others should have done long ago. It is nothing but foolishness to oppose the Act. Citizenship of the country is not guided by religion and everyone should understand this. It must be noted that the population of Hindus, which was 18 percent when Pakistan became independent, has dropped to an alarming low of 1.5 percent. Where have all the Hindus in Pakistan gone?

Dr. Bhyrappa: Fakhruddin Ali brought Muslims from Bangladesh in hordes to Assam to work as labourers. The Communists ruled West Bengal for 34 years when the border of the State became porous, enabling the Muslim population of Bangladesh to infiltrate into the country with hardly any checks. It is shameful that the current Chief Minister of West Bengal Mamata Banerjee too is towing the line of the Communists when it comes to citizenship.

The Opposition parties are propagating falsehood on CAA that was debated at length in the Parliament with the Opposition very much part of it. But now the Opposition parties are spreading lies about CAA. They must adopt a constructive approach in the criticism of the Government and not resort to falsehood only for the sake of opposing the Government. What we need today is a responsible Opposition and not a wayward and arrogant one. It may be noted here that Atal Behari Vajpayee, who was the Opposition leader when India liberated Bangladesh from Pakistan, had hailed the then Prime Minister Indira Gandhi as ‘Durgadevi’ in the Parliament. I wonder whether we have Opposition leaders of the calibre of Vajpayee, who was known for his democratic spirit and wisdom.

There are allegations that Professors in Universities are thrusting ‘isms’ on students?

Dr. Bhyrappa: Yes, there are Professors who are carrying out their personal and political propaganda for their selfish ends. The students must complain against such Professors to the higher authorities. In Western countries, students are asked to send a feedback on the quality of teaching by Professors. The Universities in turn will forward the feedback to the teaching faculty for making their own assessment of their quality and standard of teaching. This system should be introduced in our Universities too.

There are allegations that Professors have been supporting caste and religious organisations. What do you say?

Dr. Bhyrappa: Some indulge in such things as they have become Professors by caste considerations and reservation.

Why are some progressive writers opposing the CAA  and NRC?

Whether writers should have an agenda?

Dr. Bhyrappa: No, writers should not have any agenda. A litterateur should be independent in thoughts and ideas. I personally do not belong to any group of writers. My works are hugely different from each other. Any similarity in works means repetitiveness. Repetition should not be the case of any author and a writer should always look for freshness. I am writing for the past 60 years and none of my works are repetitive in nature. A writer should not have a ready-made ideology and creativity should come through writing. An author is also an explorer and anyone who follows a particular ideology is not at all a writer.