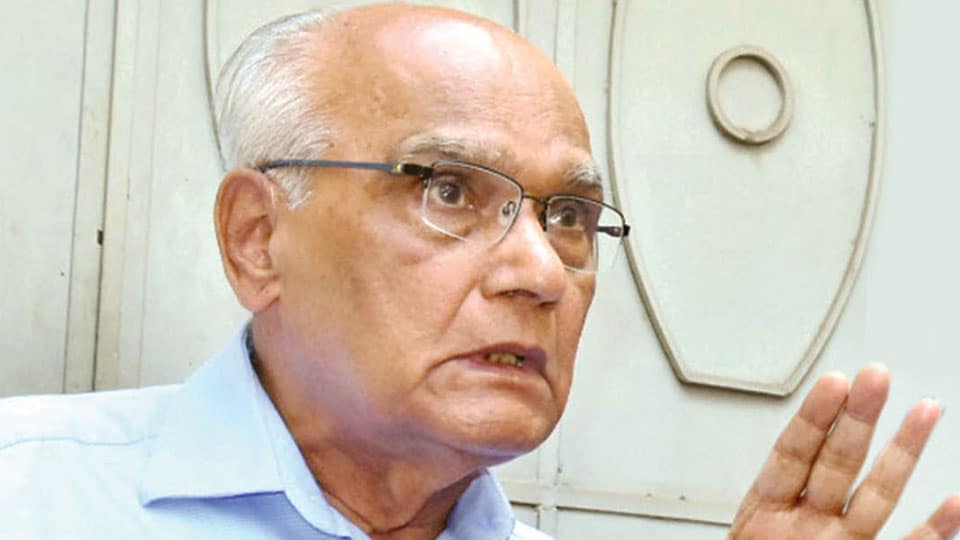 The sea is dangerous and its storms terrible, but these obstacles have never been sufficient reason to remain ashore.”

For those who are opposing CAA in our country today, the idea of India is not in believing ‘India first.’ For them, India seems to come next. Whatever it is, I cannot but remember the architect of our Constitution Dr. B.R. Ambedkar, whose pronouncements have become prophetic when we study the present political situation. In his book “Thoughts on Pakistan”, the main refrain was division of India into Hindustan and Pakistan on the presumption that it would bring prosperity, peace and salvation to Hindus. So also for Muslims who wanted a separate religion-based Muslim country — Pakistan

Dr. S.L. Bhyrappa, the renowned Kannada novelist and a philosopher in his own right, is not only a household name in every educated Kannada home but also among those who are given to reading books. After all, most of his novels and other original writings (24 novels and four volumes of literary criticism and books on aesthetics, social issues and culture) have been translated to many Indian and foreign languages.

He lives in our city and occasionally expresses views on issues that concern our society and country. Apparently, looking at the relentless, sometimes violent, agitations by the opposition parties led by Congress against the Citizenship Amendment Act (CAA), he must have felt like Ferdinand Magellan quoted above and called the media to defend the CAA. Dr. Bhyrappa was not ready to remain silent in the face of these protests against a good law made for the good of our country.

Ever since India became independent in 1947, it was the Indian National Congress (which was in the forefront of the Indian Independence Movement) that captured power in the electoral politics and ruled this country continuously for over six decades with brief interregnums.

He accused Jawaharlal Nehru, our first Prime Minister of the Congress, of dividing Hindu society on caste basis in order to consolidate Muslim votes as a guaranteed vote bank. Dr. Bhyrappa, therefore, goes hammer and tongs against Congress and the opposition parties who are now relentlessly engaged in organising protest – demonstrations, many times violent, against the enactment of CAA, which was passed with a comfortable majority both in the Lok Sabha and Rajya Sabha in the spirit of democracy and our Constitution which the opposition parties claim to hold in highest esteem, some even calling it their only holy book.

If the Government has not violated either the Constitution or the principles of democracy in bringing this law, CAA, what is the problem for the Congress and the opposition parties in supporting it? Apparently, the enactment of CAA has rattled the Congress and the left parties politically. Therefore, Dr. Bhyrappa said they were indulging in the current agitation across the country.

All things considered, it is not surprising that at the Congress Working Committee’s (CWC) first meeting in 2020, its President Sonia Gandhi has said, “The sinister purpose of the law is clear to every patriotic, tolerant and secular Indian: It is to divide the Indian people on religious lines.” (The Hindu, 12.1.2020). Now, will someone please tell the Congress President Sonia Gandhi, who came to India after decades of independence, that the Indian people were divided on religious lines in 1947 and  the Congress party was primarily responsible for it?

The Congress and the Opposition parties should also introspect about the reason why the need for CAA arose. Certainly, they are aware of it. So also our Parliament members who otherwise would not have passed the law with such clear majority. Dr. Bhyrappa has spoken about illegal immigrants entering Assam and West Bengal since partition in 1947 and how the Congress was using these immigrants as vote bank even after 1971 war.

Worst scenario is the one where over a hundred former top bureaucrats said there was an “undue obsession” about the illegal immigrants which is causing ”deep unease” among Muslims.  Well, are they talking about Pakistan Muslims or our Indian Muslims? Please clarify. It is anybody’s guess who these bureaucrats were serving while in Government service — the Congress party or the country! They must realise that the Indian Constitution is for Indians of all faiths, Muslims in India included, but not for the Muslims who are illegal immigrants.

For those who are opposing CAA in our country today, the idea of India is not in believing ‘India first.’ For them, India seems to come next. Whatever it is, I cannot but remember the architect of our Constitution Dr. B.R. Ambedkar at this juncture. Dr. Ambedkar was a visionary whose pronouncements have become prophetic when we study the present political situation in our country. His book “Thoughts on Pakistan” published in 1940 was considered a magnum opus. The main refrain of the book was the division of India into Hindustan and Pakistan on the presumption that it would bring prosperity, peace and salvation to the Hindus. Of course, so also for Muslims who wanted a separate religion-based Muslim country Pakistan.

6 COMMENTS ON THIS POST To “Musings on Dr. S.L. Bhyrappa’s defence of CAA —1”