Home » Columns » Abracadabra By K. B. Ganapathy » Musings on power of prayer and lighting of oil lamps ! 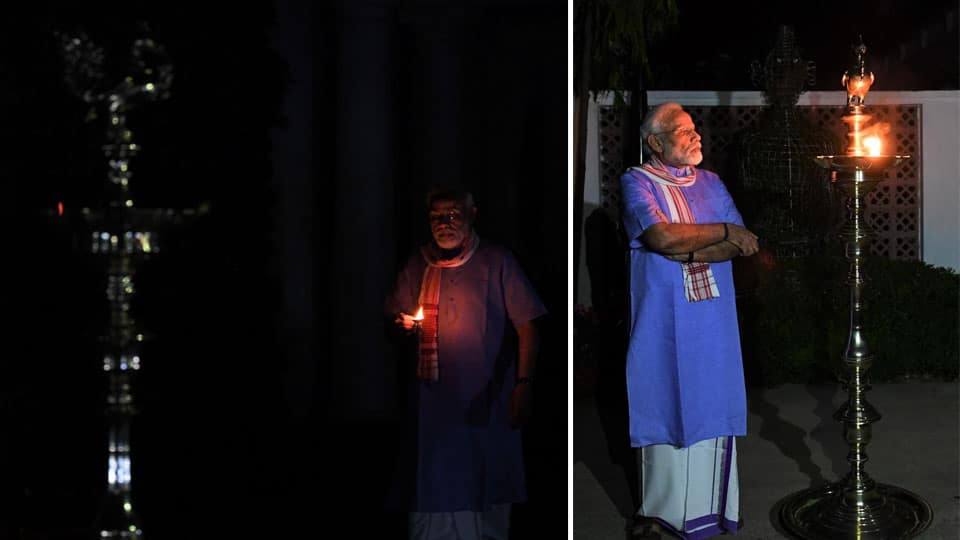 Musings on power of prayer and lighting of oil lamps !

One of the reasons why some people continue to break rules with impunity in this country is because few of them are called out or held accountable.

This has to end now. Criminal, reckless, irresponsible acts that endanger peoples lives need to be not only condemned but those responsible for such acts must be held accountable, irrespective of their religious or political affiliations. —  Javed M. Ansari, Senior Journalist and Political Analyst, formerly of ‘India Today’ Group

When Prime Minister Narendra Modi announced that he would like his countrymen to switch off electric lights in their houses and light oil lamps, candles, torches or mobile phone lights at their doors and balconies on 5th April, Sunday, at 9 pm for 9 minutes (and pray or meditate) for combating the Coronavirus, the anti-Modi brigade laughed, mocked and made derisive remarks against Modi. They even attributed personal motives of Modi and BJP for making this request to our countrymen at a time when the very existence of mankind is threatened by this pandemic.

In the annals of history of mankind there was no time when man looked so helpless to face a pandemic like this one. Yet, this invisible, most lethal enemy has to be challenged. But, how? Despite much advance in the field of medical science, no one in the world could find a drug or vaccine as a cure. Which is why doctors and medical scientists say for now Social Distancing and Lockdown are the only ways to escape from this disease, COVID-19.

It is most abhorrent, abominable and sinister that in the name of religion some sections of our society are ignoring these guidelines and warnings. As a consequence these fanatics, bigots, are making the life of health workers — Doctors, Paramedicals, Nurses, Ward boys and others — serving the sick more difficult. Action against these anti-mankind fanatics under the criminal law of the land alone cannot stop them from their mischief. Then what? Pray?

Well, probably it is for this reason that Modi, after announcing the Lockdown till April 14, 2020 earlier (which was not observed by many Modi-baiters under our SECULAR LIBERAL DEMOCRACY), now announced this novel idea of getting the 130 crore people of our country to Pray (Modi did not use that word lest it must sound non-Secular and superstitious or even Hindu) by lighting the traditional lamps at the risk of being despised by the “Left, liberal intellectuals.”

Poor Narendra Modi. No matter what he does, whether it is good for the people and                             the country or not good, either way he is damned. I am reminded of a short story by that famous Russian Author Anton Chekhov, very aptly, as if he knew that Modi in India would face this situation, titled “Oh! The Public.”

Let me give the gist of the story. Podtyagin was a Head Ticket Collector in the Russian  Railways. The travelling public used to criticise him for not doing his work properly due to his drinking habit.

One day Podtyagin, realising his irresponsible and negligent conduct in his work, did some introspection and said to himself in a sort of soliloquy: “I am glad to get my salary, so I must do my work honestly, heartily, conscientiously, regardless of sleep or comfort. I should not take my work easy. Now I am taking salary for doing nothing. It is not right at all.”

Wisdom seemed to dawn upon him and he got down to doing his work. As required, he woke up his subordinate Ticket Collectors and went with them up and down the Railway carriages, inspecting tickets from the passengers.

He saw a second-class passenger, lean and scraggy-looking person wrapped up in the blanket.

Podtyagin, the ‘reformed’ Head Ticket Collector called out, “Ticket, please” but this passenger did not reply.

The Head Ticket Collector then touched him on the shoulder and repeated ‘Ticket please.’

The dirty-looking passenger was annoyed, he created a scene. Shouted loudly saying that he was sick and sleeping and yet, this Ticket Collector was harassing him etc.

He looked at the fellow passengers and said, “It is merciless, it is inhuman, it is cruel…”

Podtyagin was angry and told the passenger that he should stop shouting and stop                         disturbing the Public. Otherwise, he would remove him from the train and hand him over to the Police.

Here is the crux of the story. The “Public” reacted saying what Podtyagin was doing to that passenger was “revolting”, “inhuman”. He was “persecuting an invalid.” And advised the Head Ticket Collector to “have some consideration.” I thought of our “Lutyens’ Club members in Delhi !”

Among the Public was an engineer and a military officer. Knowing the passenger was a drug addict, they criticised the Head Ticket Collector and insisted that he should apologise to that passenger !

When the Station Master who was brought in said, “Drop it,” ordering not to take any action against that ticketless passenger, who openly said he had taken “a third dose of morphia,” poor Podtyagin gave up and walked out of the carriage in despair with the following words:

“Oh, the Public! There is no satisfying them. It is no use working and doing one’s best! …If you do nothing, they are angry; if you do your duty, they are angry too.”

Mercifully, in India today the real “Public”, I mean the majority of the silent people, of all religions and walks of life, are with Modi. It is only a frustrated Opposition and Religious Fundamentalists who are unhappy with Modi.

Now let me ruminate on Prime Minister Modi’s call to light lamps. What was that Tamasha, some pseudo-intellectuals and atheists rued. A prayer invocation to God to give us strength to overcome the COVID-19 or an idea to unite 130 crore people of this country, cutting across religious barrier, in a show of solidarity to fight this COVID-19 unitedly?

I lighted an oil lamp with wick and held it in my hand for 9-10 minutes closing my eyes in mediation or prayer — I do not know. But my inner voice said, “God save India. God save the World.”

This indeed is our summer of discontent. When there are no medicines or cure for our present fatal COVID-19 disease, what is our next hope? Yes, Social Distancing. Lockdown. But how long? Here in comes the prayer.

But as Hamlet asks in Shakespeare’s play Hamlet: “But oh, what form of prayer can serve my turn?”

I guess, when everything fails our hope is in prayers. Again, which is why Hamlet exclaims:

“There are more things in heaven and earth Horatio than dreamt of in your philosophy.”

So saying, Hamlet concludes that human knowledge is limited. And so pray! After all, prayer is also a form of requesting of good things from God !!

God may grant the request or may not. However, one request He will never grant is saving one from Death !

Be that as it may, God seems compassionate, merciful, kind and condescending to our prayers. Ask the Mughal Emperor Babur. History records that Babur’s eldest son Humayun had been designated as his heir. Humayun was sent to Afghanistan on a military campaign. When he received the news about Babur’s failing health, he returned to India in 1529.

Surprisingly, Humayun suddenly fell seriously sick and appeared to die soon. Distraught, his father Babur sat in prayer by his son’s sick-bed and began to pray. He prayed that he would forfeit his own life for Humayun’s recovery. In fact he made a deal with God. Remember, that he made a similar deal with God, when he went to war with Rajputs at Khanua, that he would not drink alcohol and would kill Rajput infidels in the war he designated as Jihad. He had won the war.

Apparently, he knew the power of prayer. What was important was that once again Babur’s piety, prayer, was rewarded. Humayun came out of his death-bed, but Babur died.

It could be, Modi was inspired by Gandhiji who said life will persist in spite of death and light will persist despite darkness. So by lighting the lamps, Modi wants to dispel this COVID-19 darkness encompassing our country and the world.

Why not give him the benefit of doubt for his belief and to all those, like me, who believe in Modi’s harmless, no-cost idea about lighting a lamp.

9 COMMENTS ON THIS POST To “Musings on power of prayer and lighting of oil lamps !”