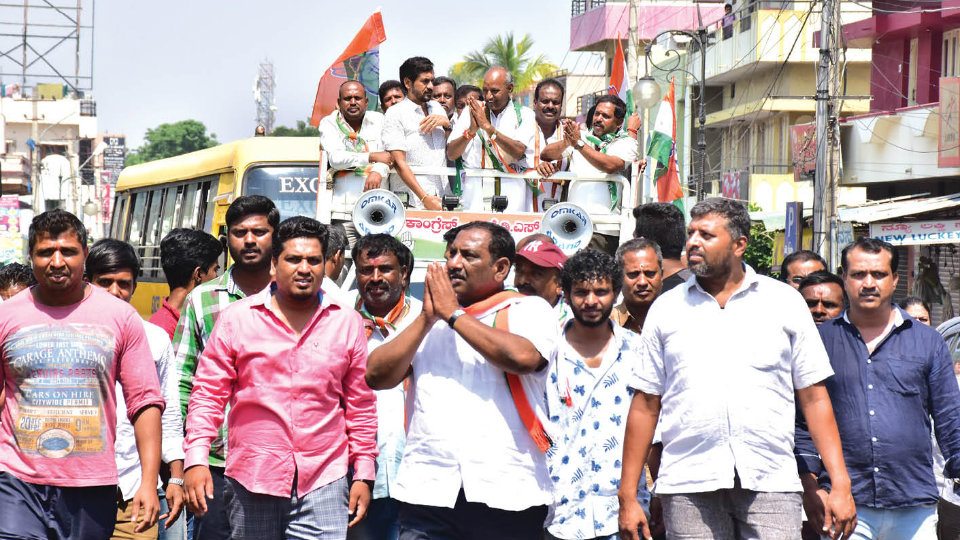 Mysuru: Coalition candidate C.H. Vijayashankar, former MP and former Minister, who is contesting on a Congress ticket from Mysuru-Kodagu LS seat, campaigned at K.G. Koppal in the city on Friday.

Vijayashankar set out his campaign after performing puja at Chamundeshwari temple and held padayatra and road shows in the lanes of K.G. Koppal and surrounding areas seeking votes for him.

Later speaking to press persons, Vijayashankar said that he has been getting good response from the people during the course of his campaign.

Declaring that CLP leader and former CM Siddharamaiah and District Minister G.T. Devegowda will hold a joint campaign in Chamundeshwari Assembly segment on April 14, the Congress candidate alleged that the BJP would renew efforts to destabilise the coalition government once the LS polls are over.

He further said that PM Narendra Modi during his rally in the city on Apr. 9 did not mention the name of BJP candidate Pratap Simha from Mysuru-Kodagu or V. Sreenivasa Prasad of Chamarajanagar, but specially mentioned the name of independent candidate from Mandya LS seat, which shows that Modi is more interested in Mandya than Mysuru.