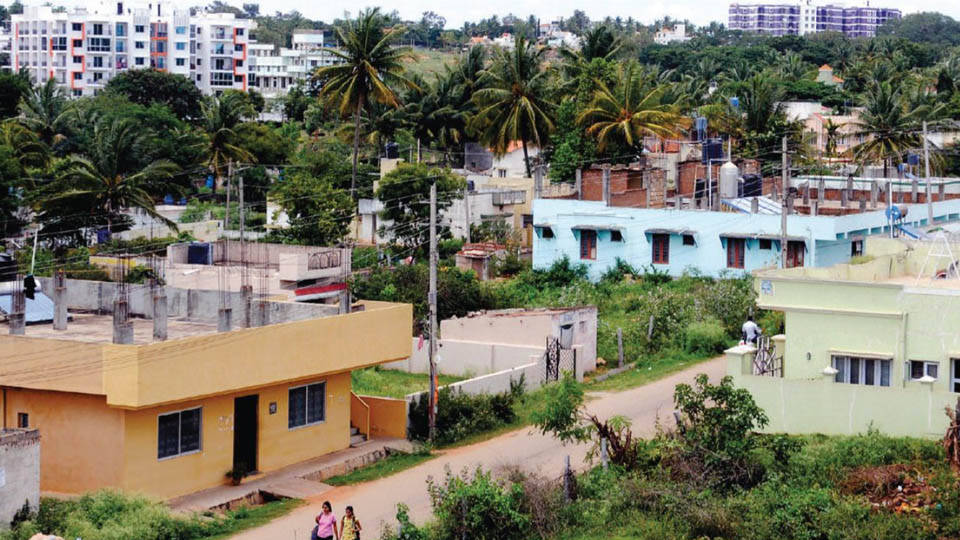 Vijayashreepura Land Row: Cabinet to save houses from demolition; will compensate land owners

Bengaluru: With Assembly elections round the corner, the long-pending issue of Vijayashreepura Layout seems to be reaching an amicable settlement as the State Government has finally decided to intervene, bringing a major relief to the residents who have been trying to save their houses from being demolished.

Highly-placed government sources told Star of Mysore that as Chief Minister Siddharamaiah was preparing ground to contest from Chamundeshwari, he is taking special interest in resolving Vijayashreepura imbroglio. Sources also said that the Chief Minister does not want the controversy to be an election issue, giving his political opponents extra ammunition for counter attack.

The government has decided to implement the Supreme Court order on the land that extends up to 94.28 acres and comes under Survey No. 1, Vijayashreepura. It will pay compensation of Rs. 55 crore to the original land owners.

At a Cabinet meeting held yesterday, the government has decided in principle to regularise the land and pay compensation to the family of late Sirdar K.B. Ramachandra Raje Urs. The compensation will be paid to Chaduranga Kantharaj Urs (son of Sirdar K.B. Ramachandra Raje Urs) and his family as per the 2001 guidance value and as per Section 180 of Karnataka Land Acquisition Act 1961.

The compensation will either be paid by the government or the money will be levied from the Vijayashreepura residents in the form of fine. The Cabinet has directed State officers to form a Committee to decide on this issue and also examine the legal and financial implications of the government move.

The report by the Committee will be submitted in the next Cabinet meeting.

Reacting to the latest Cabinet meeting, President of Vijayashreepura Kshemabhivruddhi Sangha Dr. Ranganath told SOM that the Cabinet decision has provided residents a big relief. “We have been living here since the last 35 years and we hope that the issue will be sorted out soon,” he added.

Regarding the fine amount that the government is planning to levy, he said that they were ready to pay a reasonable fine. “Most of the people who reside here are from middle and lower middle class and if it is a reasonable amount that will lead to regularisation of our properties, we are ready to pay. Actually, MUDA itself can pay the amount as once regularised, a vast land goes to MUDA and it can sell them at premium prices,” he added.

The land extends up to 94.28 acres and comes under Survey No. 1. It is owned by Sirdar K.B. Ramachandra Raje Urs. The property was later inherited by Chaduranga Kantharaj Urs and his sisters Tripurasundari Devi, Deepamalini Devi and Keerthimalini Devi. Ramachandra Raje Urs had divided the property into five parts and distributed among his children and kept one part to himself. Later Chaduranga Kantharaj Urs divided his share of property among his children Devrath Urs and Jayalakshmi.

The then City Improvement Trust Board (CITB, now MUDA – Mysuru Urban Development Authority) acquired the 94.28-acre land abutting Manasagangothri, the PG campus of University of Mysore in 1984-85 (final acquisition in 1988) which was questioned in the Court by Kantharaj Urs and his family as MUDA failed to pay compensation.

Later, MUDA allotted 15 acres to JSS Mahavidyapeetha. Out of the remaining 79.28 acres, 23.5 acres was developed as Vijayashreepura Layout. There are a total of 184 concrete houses, 80 houses with asbestos sheets, eight houses with Mangaluru tiles, two temples, and 65 vacant sites in the layout.

Hearing the petition filed by Kantharaj Urs, the Apex Court, on December 16, 2015, had ruled against the acquisition of the land by MUDA and had set a deadline of six months and subsequently extended deadlines following MUDA appeals and fixed the final demolition deadline to Sept. 15, 2016.

The Court also later provided a concession to JSS Mahavidyapeetha as it was an educational institution and the same yardstick could not be applied to Vijayashreepura residents. It asked the State government to pay compensation to the petitioners at the market value or hand over the land to them after vacating the existing residents.

It may be recalled here that on June 1, 2017, at a meeting with Chief Minister Siddharamaiah at his Mysuru residence, MUDA Chairman D. Dhruvakumar and other officers including the then MUDA Commissioner Dr. M. Mahesh, Chaduranga Kantharaj Urs had agreed to withdraw his petition in the interest of Vijayashreepura residents.