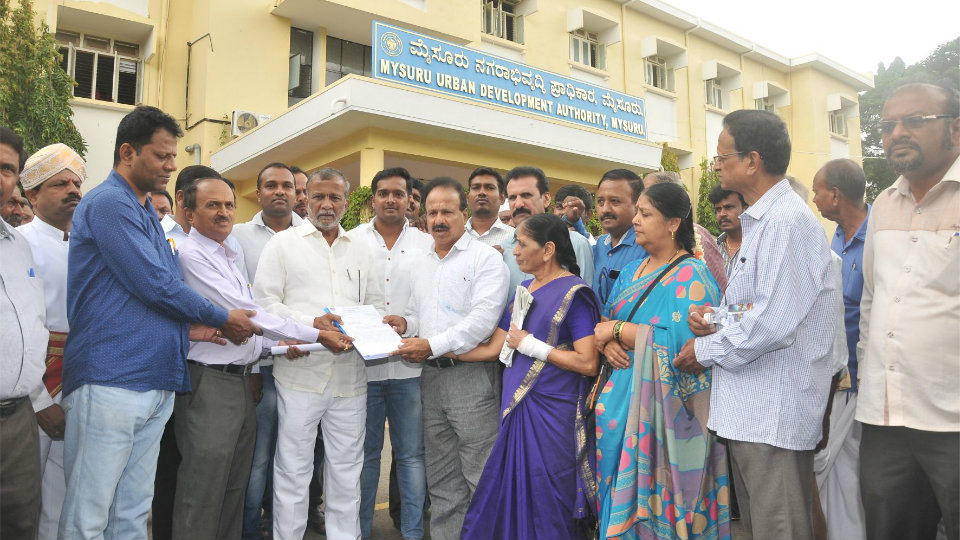 Mysuru: The vexed issue of properties coming under Kurubarahalli Survey No. 4 and other layouts namely Alanahalli, K.C. Nagar and Income Tax Layouts under Alanahalli Survey No. 41 will once again come before Chief Minister Siddharamaiah. MUDA Chairman D. Dhruvakumar told a delegation of residents this morning that he would personally speak to the CM when he comes to the city on July 15 and urge him to solve the imbroglio.

A delegation of residents led by B.P. Manjunath, BJP National Council Member and Convener, Survey No. 4 Hitharakshana Samithi met Dhruvakumar and appealed to him to save the properties of over 30,000 residents who have purchased land through City Improvement Trust Board (CITB) (now MUDA).

Manjunath told the MUDA Chairman that the entire land was unscientifically classified as ‘B-Kharab’ (government land) by some officers who had no knowledge about the history of the layouts formed on the land.

This has resulted in non-issue of ‘khatas’, title deeds, building plans, completion certificates, etc. since the last 3 years thus  legally disabling residents from selling their properties, mortgaging them to raise loans or to  partition properties or to meet their commitments, he said.

Maintaining that the Survey No. 4 Hitharakshana Samithi had conducted a series of agitations and had even booked criminal cases against some officers for causing mental agony to the residents, Manjunath said that despite all this, the issue was not solved. He alleged that despite the issue being brought to the attention of the Chief Minister in the past, no action was taken.

“We hear only that the Mysuru Deputy Commissioner and Regional Commissioner have submitted their reports on the land and a way out of the deadlock to the concerned Government secretary. But for these reports, we have seen nothing concrete and the residents continue to suffer. Appreciating Dhruvakumar for his many people-friendly initiatives, he urged him to intervene.

Receiving the memorandum,  Dhruvakumar said that he understood the plight of the residents and would speak to CM Siddharamaiah when he comes to Mysuru on July 15.