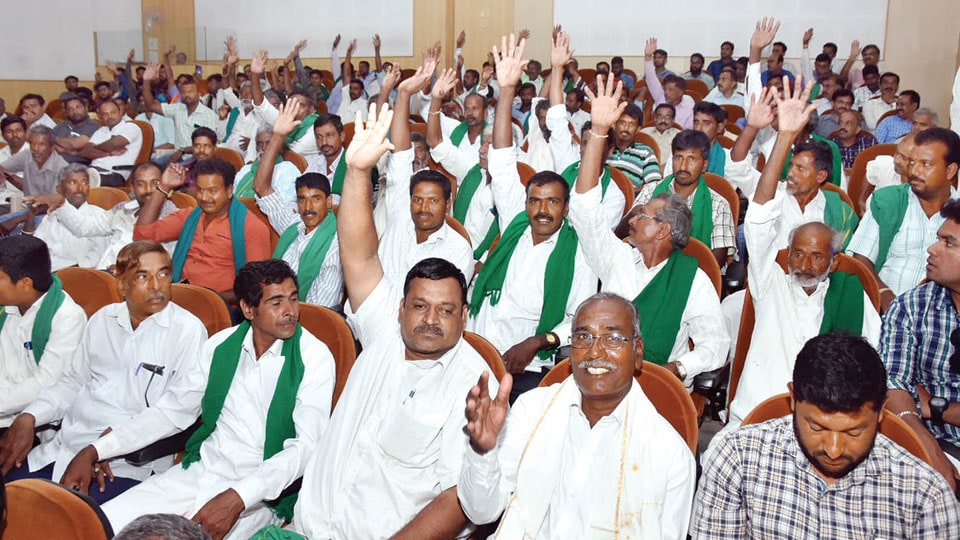 Mysuru: The ambitious project of Mysuru Urban Development Authority (MUDA)  to form Ballahalli Layout, in partnership with farmers, has hit a roadblock with 90 percent of farmers demanding MUDA to either drop the project or pay a compensation of Rs. 1.50 crore per acre. They have rejected MUDA’s 50:50 formula where 50 percent of the developed sites will be given free of cost to land owners or farmers whose land have been acquired.

At a meeting held at Rani Bahadur auditorium in city this morning between MUDA and farmers, land owners refused to part with their fertile land and trashed MUDA’s proposal of compensation saying that when farmers of Chamarajanagar district are getting a compensation of Rs. 1.50 crore per acre, farmers of Ballahalli are denied the same amount.

At the Ballahalli Layout near Koorgalli that has been cleared by the State Government, MUDA plans to distribute 4,000 sites.

A Detailed Project Report (DPR) has already been prepared. MUDA has plans of developing the proposed residential layout at Ballahalli into a full-fledged satellite township to disperse growth and de-congest the city.

But till now, the deadlock between MUDA and the farmers has not been resolved despite many such meetings along with the elected representatives. Today’s meeting was an extension of one of those futile meetings.

Speaking on behalf of farmers, Dr. Guruprasad said that MUDA had showed dictatorial attitude while issuing notification to acquire Ballahalli.

“None of the farmers were consulted and the decision was unilateral. MUDA had lied that 80 percent of the farmers have accepted the land acquisition,” he charged.

Taking MUDA officials to task, Guruprasad said that MUDA has still not paid compensation of Rs. 129 crore to farmers whose lands were acquired for new layouts way back in 1985. “When it comes to developing layouts you release Rs. 450 crore at one go and when it comes to compensation, you dither,” he alleged.

Over 250 farmers attended today’s meeting and all of them raised their voice against the project. “This is a fertile land where we get ground water at 200 feet. We grow vegetables and ragi and eke out a contended life,” another farmer said.

Farmers made it clear that they will part with the land only if they are given Rs. 1.50 crore per acre. “With that money we will buy agricultural land elsewhere and lead a life. We will have to boycott the District in-charge Minister and the Chief Minister if they try to meddle in this issue,” farmers warned.