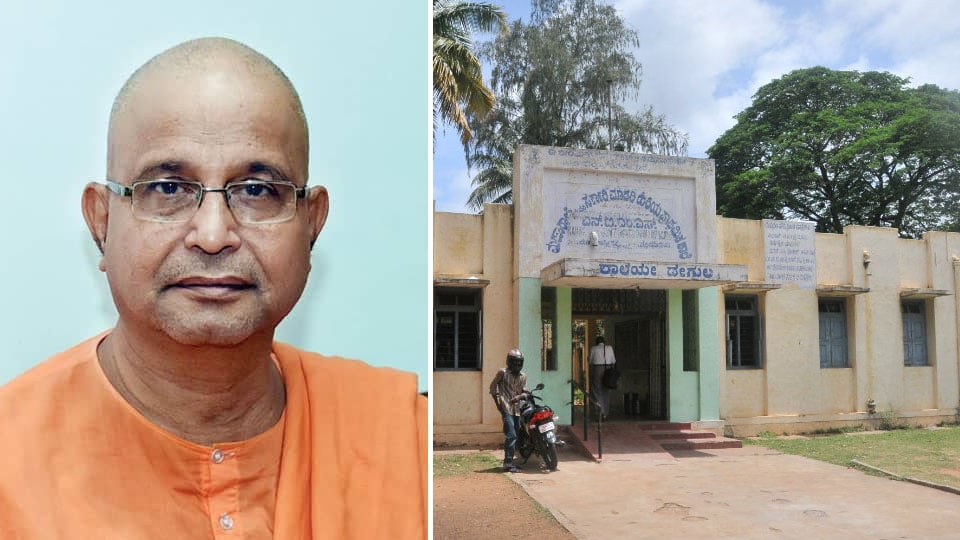 Mysuru: Maintaining that handing over NTM (New Type Model) School on Narayana Shastri Road in city to Sri Ramakrishna Ashrama (RK Ashrama) for the construction of Viveka Memorial is within the law, Swami Muktidanandaji of Mysuru-based RK Ashrama has said that the State Government should vacate the NTM School by transferring the students to the nearby Devaraja Government Primary School as per a High Court order and thus enable the Ashrama to take physical possession  of the building.

In a press release, Swami Muktidanandaji said that the NTM School will not be shut down but will be merged with Devaraja Government Primary School located closeby.

Pointing out that there is a good learning atmosphere for children at Devaraja School, with adequate number of teachers and other facilities, the Swamiji said that the merger of NTM School will not affect the children or the parents in any way. As such the parents must not get unnecessarily worried about the future of their wards, he said.

It may be recalled, in 2014, the then Chief Minister had issued oral instructions not to vacate NTM School, following which the Commissioner of Public Instructions (CPI) at Bengaluru issued a written order to DDPI Mysuru to follow the CM’s instructions. Subsequently, Sri Ramakrishna Ashrama moved the High Court against the order.

The High Court, which heard the Ashrama’s petition, observed that the CPI had exceeded his authority to issue the order based only on the CM’s oral instruction and the order issued was in violation of the law.

The Court, noting that the CPI’s order is not applicable under any circumstances, ordered that the authorities must implement the Government Order transferring NTM School building to RK Ashrama for the construction of Viveka Smaraka (Swami Vivekananda Memorial Cultural Youth Centre). As per the Court order, the Education Department must vacate the NTM School by transferring students to Devaraja Mohalla School and handover the keys of the building to RK Ashrama, the Swamiji said.

The RK Ashrama got a separate Khata for the purpose in 2012-13 and is paying the applicable taxes since then. Hence, according to law, the property of NTM School belongs to RK Ashrama. Also, the then DDPI had handed over the entire premises of NTM School to the Ashrama on March 15, 2013, he said.

Asserting that the Viveka Memorial does not mean merely having a statue of Swami Vivekananda, he said that it will also function as a Seva Kendra, where thousands of students will be imparted moral, spiritual, religious, cultural education and a host of other short-term courses on personality development and such other subjects.

The Centre will also conduct lecture sessions on motivation, guidance etc. Besides this, there will be several other programmes on youth empowerment based on Vivekananda’s vision and concepts. The Centre will have a full-fledged Library where students can access to knowledge-gaining books, the Swamiji said.

Highlighting the programmes launched by the Ashrama for the academic growth of poor children, the Swamiji said that RK Ashrama has launched an initiative called ‘Viveka Shikshana’ under which 9th and 10th standard students of Kumbarakoppal and Hinkal Government Schools are imparted free education after school hours.

Also, the Ashrama has set up Sri Ramakrishna Seva Kendra at Tankalemole, a remote border village in Chamarajanagar district and built over 100 houses to the poor in the village. Despite all such services rendered by the Ashrama to society, it is not correct on the part of some persons to come up with wrong facts before the media.

Reiterating that the proposed Viveka Memorial is not meant only for construction of a Vivekananda Statue, he said the Memorial will become an important tourist destination attracting thousands of visitors everyday, thus taking the pride of Mysuru to greater heights.

With all these features, the Viveka Memorial will become a spiritual centre, guiding thousands of youths everyday, thus making the Centre more purposeful and pro-societal, the press release said.

2 COMMENTS ON THIS POST To “Row over proposed Viveka Smaraka – Giving possession of NTM School land to RK Ashrama is within Law: Swami Muktidanandaji”