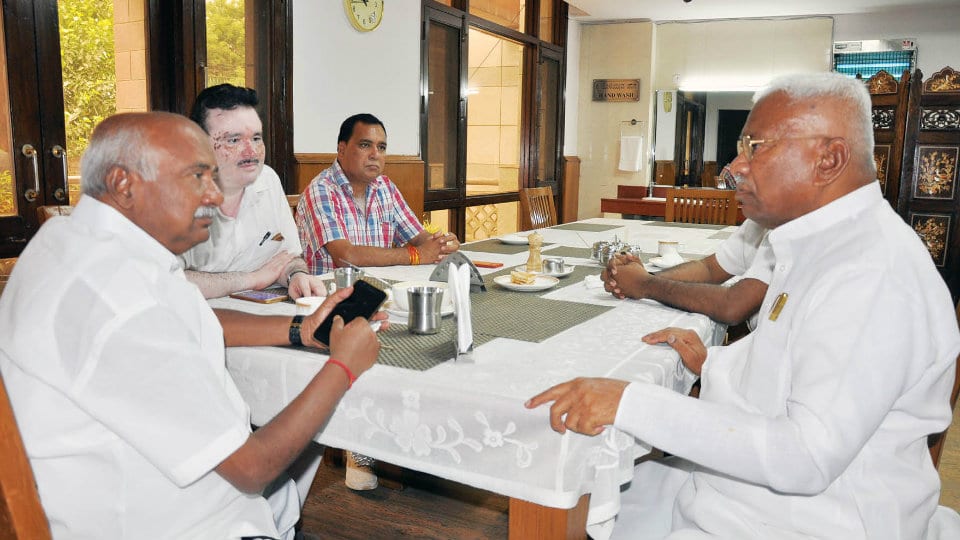 New Delhi: Even as the JD(S)-Congress coalition Government in Karnataka is on a shaky wicket with the resignation of two Congress MLAs, senior JD(S) leader and MLA A.H. Vishwanath had a breakfast meeting with a couple of BJP MPs from the State at Karnataka Bhavan here this morning.

Vishwanath, who had left Bengaluru four-days ago on a pilgrimage to Bihar and Assam, landed in New Delhi late last night after offering prayers at the famous Kamakhya Temple in Guwahati, Assam yesterday.

This morning, Vishwanath met BJP MPs G.S. Basavaraju (Tumakuru) and B.Y. Raghavendra (Shivamogga) over a breakfast at Karnataka Bhavan, thus giving rise to speculations about him joining the BJP.

Later speaking to press persons at Karnataka Bhavan this morning, Vishwanath scotched rumours of his joining the BJP and said that he would inform the media well in advance if he were to join the BJP.

Maintaining that there was nothing wrong to talk about politics with leaders of other parties, Vishwanath observed that Karnataka politics was deteriorating.

Stating that there was lack of co-ordination between the leaders of the coalition partners, Vishwanath said it appears  that the Co-ordination Committee Head and CLP leader Siddharamaiah is not too interested in the continuation of the coalition Government, while at the same time the Congress High Command wants the coalition to continue.

Reiterating that no special significance must be attached to his meeting with BJP MPs, Vishwanath, who quit as Karnataka JD(S) President recently, refused to comment on the resignation of two Congress MLAs.

Vishwanath lashed out at Siddharamaiah saying that the CLP leader was more interested in functioning as the Opposition leader, rather than working for better co-ordination between the coalition partners.