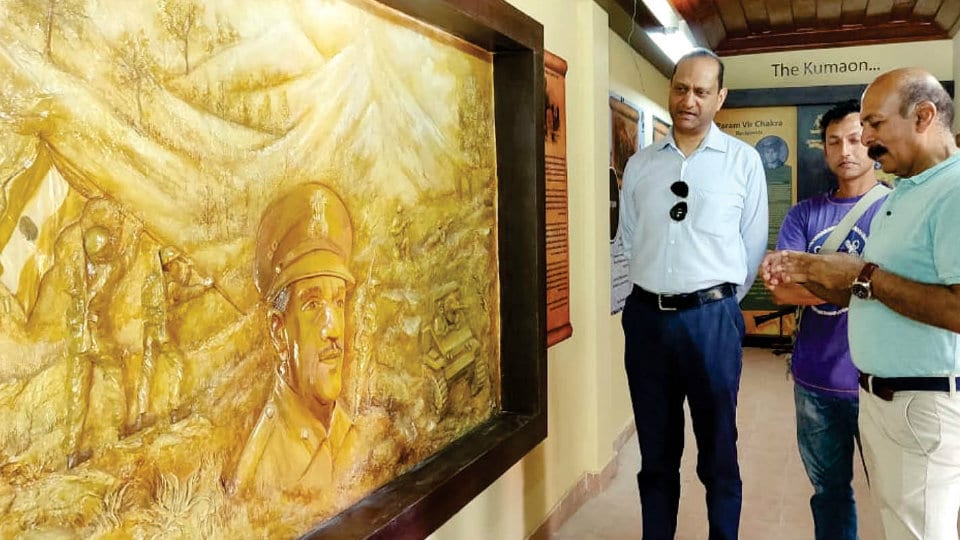 When General Thimayya’s grandson comes calling at ‘Sunny Side’

Madikeri: ‘Sunny Side’, General Kodandera Subayya Thimayya’s house in Madikeri that is being converted into a museum and a war memorial, had a special moment last week when the celebrated General’s grandson   Kongetira Belliappa visited the museum.

‘Sunny Side’ is located on G.T. Road in Madikeri and it is being renovated at an estimated cost of Rs. 6 crore. Belliappa is the son of Thimayya’s daughter Mireille, who married Maj. Gen. Kongetira M. Chengappa.

Visiting the museum that earlier functioned as RTO Office for the first time, Belliappa went around the museum and saw his grandfather’s photos, memorabilia and other artefacts. Stopping in front of some of the photographs, he turned emotional, recollecting the service of General Thimayya who was known as the “Soldier’s General.”

Some of the photographs portrayed the legendary General’s brilliant strategies and daring that have set the standard for professional soldiering and leadership. Belliappa appreciated the collection of photographs, artefacts and other items related to the Indian Army at the museum.

Field Marshal K.M. Cariappa-General K.S. Thimayya Forum Convenor Major Biddanda A. Nanjappa, who is instrumental in setting up the museum and the war memorial, explained the museum and its various sections.

Providing a detailed account of how General Thimayya inspired his soldiers to carry parts of Army Tanks up to a height of 12,000 feet snow-clad mountains of Zojila Pass — one of the highest Passes in the world — when Pakistan planned to annex Kashmir by force during their offensive of 1947-48, Nanjappa told Belliappa that it was a daring move and the Pakistan army ran away after seeing the Tanks staring at them. The parts of Tanks were carried up the mountains overnight and were assembled by early morning of Nov. 1, 1948.

The very appearance of the Tanks utterly dampened the morale of the bewildered Pakistanis who either fled or were vanquished. Once Zojila was taken, the road to Kargil was reopened and Ladakh was safe. Ultimately, on Nov. 24 Kargil was re-taken. Thus the unofficial 1st Indo-Pak War (and perhaps the longest and toughest of them all) ended in success owing to the bold, shrewd and relentless pursuit led by Gen. Thimayya, explained Nanjappa.

Nanjappa then requested Belliappa to hand over certain items that belonged to General Thimayya that is in possession of the family to be kept in the museum.

Art works featuring the valour of Indian soldiers on the battlefield will occupy the centre stage at ‘Sunny Side.’ Other main attractions of the museum will be the articles used by Gen. Thimayya, military uniforms, books and information on Indian Army, Navy and Air Force.

Apart from an Army Tank, weapons that were used by the soldiers of Indian Army   in the past during many operations have been donated to the museum.