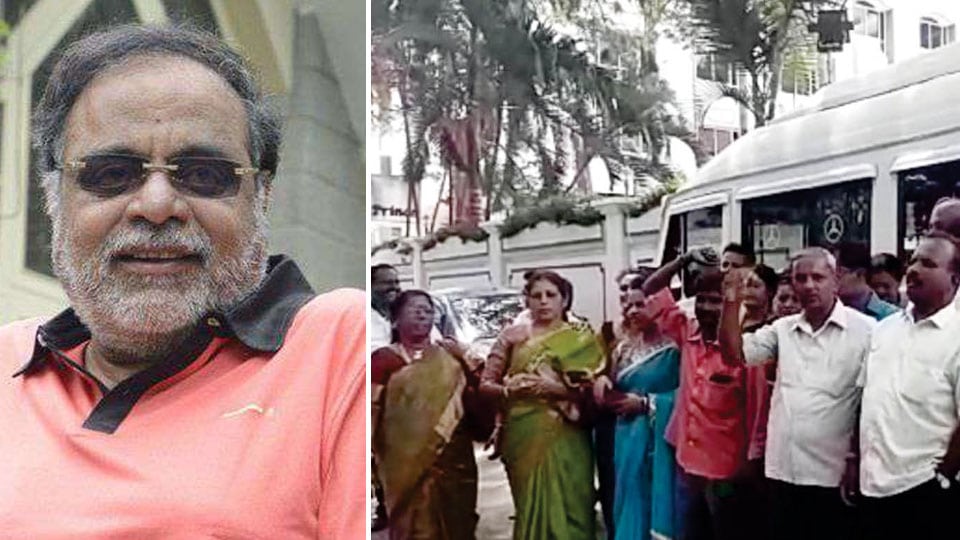 Where is Rebel Star Ambarish?

Mandya: Rebel star Ambarish has been given a ticket to contest from Mandya, but he is not happy. He has been sulking ever since the election process has been set into motion and has several demands before he agrees to file his nomination papers.

This morning, a group of his supporters went in search for the actor who has been incommunicado. The supporters, under the leadership of Ambarish’s close aide Amaravathy Chandrashekhar, left Mandya in about eight cars and arrived in Mysuru after searching for him in Mandya and in some resorts at Srirangapatna.

The group then arrived at Hotel Sandesh The Prince at Nazarbad after they learnt that Ambarish had secretly checked in there. One more group of over 300 fans and supporters also arrived at the Hotel this morning and were seen shouting  slogans, urging the actor to contest from Mandya.

Hotel employees, however, were tight-lipped about the actor’s stay. They neither did confirm about Ambarish staying at the hotel nor denied it. Sources said that Ambarish has refused to meet anyone and has even declined to meet his close associates.

Seeing a crowd assembling in front of the Hotel, Nazarbad Police rushed in more staff for crowd management but the fans refused to budge. The Police, despite convincing, failed to move the crowd that was hell-bent on meeting the actor.

Addressing reporters at the Hotel, Amaravathy Chandrashekar said that Ambarish will contest from Mandya and Chief Minister Siddharamaiah will meet him (Ambarish)  this evening and convince him to contest.

Several senior leaders in the Congress have tried to patch things up with Ambarish. The former Minister and the strongman of Mandya is determined to bat for his pride. The Mandyada Gandu (Man from Mandya) is in no mood to forget the “insult” he had to bear after he was dropped from the Ministry by Siddharamaiah in June 2016. He has refused to accept the ‘B’ Form unless his demands or conditions are accepted.

During the patch-up attempts, the main point he had raised was with regard to the candidature of Cheluvarayaswamy who joined the Congress after quitting the JD(S). Ambarish is upset that he was not consulted.

3 COMMENTS ON THIS POST To “Where is Rebel Star Ambarish?”