Home » News » I will fight 2018 polls as directed by Sonia and Rahul Gandhi, says CM 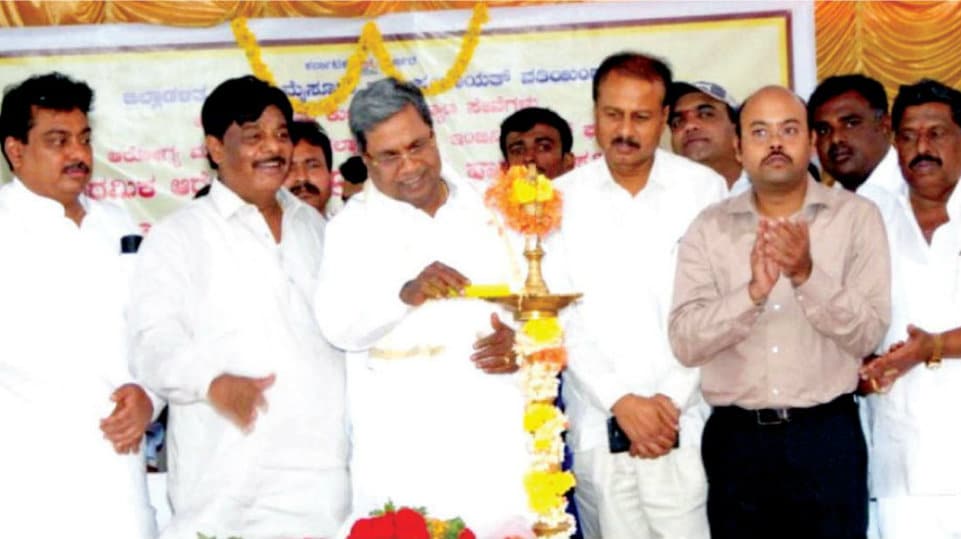 I will fight 2018 polls as directed by Sonia and Rahul Gandhi, says CM

Nanjangud: Maintaining that he was contesting the 2018 Assembly polls on advice from AICC President Sonia Gandhi and Vice-President Rahul Gandhi, Chief Minister Siddharamaiah appealed the people to once again bless him for leading the State.

Addressing the gathering during the Foundation Stone laying ceremony for the construction of a Primary Health Care Centre and a residential quarters in S. Hoskote village in the taluk, Siddharamaiah said that the people of Varuna constituency had elected him twice by a margin of over 30,000 votes. As he is now busy as Chief Minister of the State, he has deputed his younger son Dr. Yathindra Siddharamaiah to take care of the constituency, following the death of his (CM) elder son Rakesh, Siddharamaiah said and added that he had not yet decided on whether to contest from Varuna or Chamundeshwari.

Asserting that the State Government is pro-farmer and is working for the welfare of the people of all communities, he said that the Government was taking concrete steps for eradicating poverty from the State.

Pointing out that the State Government has waived farm loans availed from the Co-operative sector, the CM said that the Union Government should now waive the agrarian loans taken from Nationalised Banks and Central agencies.

The BJP leaders from the State should lay a siege to the Parliament if the Union Government fails to waive farm loans, he said. Highlighting the welfare measures of his Government for the upliftment of the poor, Siddharamaiah said that the State Government has released funds for SC/ST communities   as per law.

The Government is spending money based on the population of SC/ST communities, he said adding that his Government had spent Rs. 27,704 crore this year for SC/ST development.

Later taking part in the Guddali Puja for various development works totally costing Rs. 2.30 crore at Suttur, the CM reiterated that he had not taken a final decision on contesting from either Varuna or Chamundeshwari.

During the course of his speech, Siddharamaiah asked Water Resources Minister M.B. Patil about the water level in various dams. Minister Patil, who was stunned by the question, replied that he had no information about water level in dams.

Later, Siddharamaiah himself said that there was a total of 18 TMC of water in all major dams taken together including Kabini, Harangi, KRS and Hemavathi. Reacting to farmer protests against release of water to Tamil Nadu, the CM admitted that only a little quantity of water is being released to TN in compliance with the Supreme Court order.