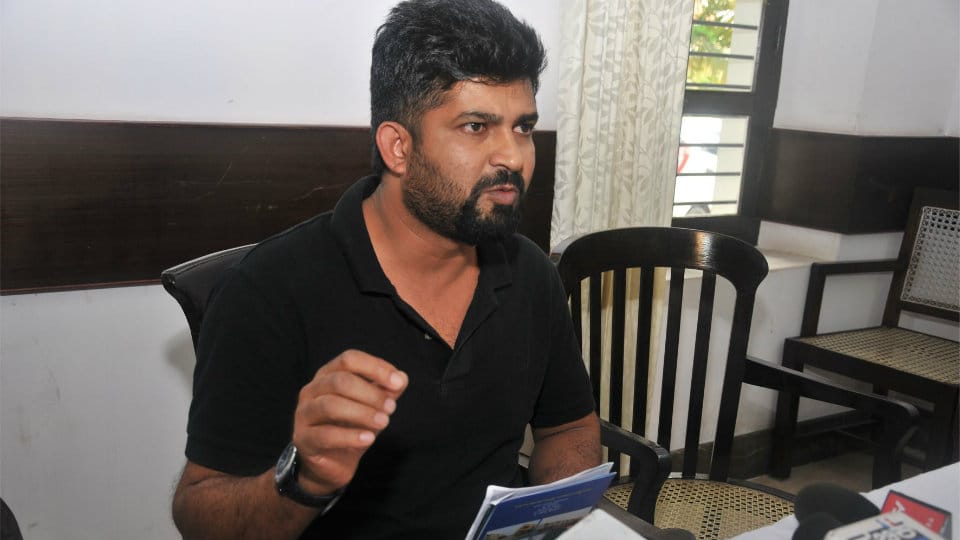 Addressing a press meet at Jaladarshini Guest House here yesterday, Pratap Simha said that Chief Minister Siddharamaiah by inaugurating Central-sponsored projects is giving a wrong message to the public. He recalled that without providing any information to him, the CM had inaugurated Ring Road, Hosa Belaku scheme and other Centre-funded projects.

He further said that he had sent a notice to Deputy Commissioner and MUDA Commissioner seeking a clarification, which was later withdrawn on an assurance that the mistake would be rectified. He regretted that the wrong practice and biased approach has continued.

Going further, the MP said that the housing complex of 1,048 houses in Ekalavya Nagar was supposed to be inaugurated by Union Minister Venkaiah Naidu, being a JnNURM project.

He pointed out that the District Administration, lacking basic courtesy to invite him and Venkaiah Naidu, has gone ahead with the inaugural ceremony by CM. He added that an invitation had been given to him just a day earlier with no purpose and sanctity.

Pratap Simha alleged that the protocol had been breached for the inaugural ceremonies of Central-aided projects like shandy yard cleaning and packing unit at APMC market in Bandipalya and foundation stone for housing complex of 1,329 houses under Pradhan Mantri Awas Yojana in K.R. Constituency.

He pointed out that he would serve a notice to erring officers for breaching protocol and get a reply in front of Parliament.

Continuing, Pratap Simha said that he could have prevented the CM from launching Central projects but stressed that he preferred to work under the legal frame. He added that he had sought at least postponement of inaugural functions. He further said that people were hopeful that Siddharamaiah would implement good projects in city and district being the CM’s origin.

He regretted that nothing had transpired though over four years of governance had elapsed and it has to be waited and seen for something constructive for the district in the last eight months.

Referring to CM Siddharamaiah’s remarks on him (Pratap Simha) that the latter lacked maturity, the MP shot back “I do not need your (CM) maturity lessons which should be taught to your son and office staff.”

Going further, Pratap Simha said that he was just three years into politics as against 40 years of Siddharamaiah and hence seeks political lessons from the CM and not on maturity which was not essential. He alleged that CM’s son Dr. Yathindra, without holding any Constitutional post or position, conducts meeting of officers and launches projects in Varuna Constituency and even huge flex boards of Yathindra are erected, who needs a lesson on maturity.

Similarly, the CM’s office staff, who organise the inaugural programmes of Centre projects deserve a lesson on maturity,said Pratap Simha.

MP Pratap Simha
Party High Command will decide on my constituency: CM
I will fight 2018 polls as directed by Sonia and Rahul Gandhi, says CM