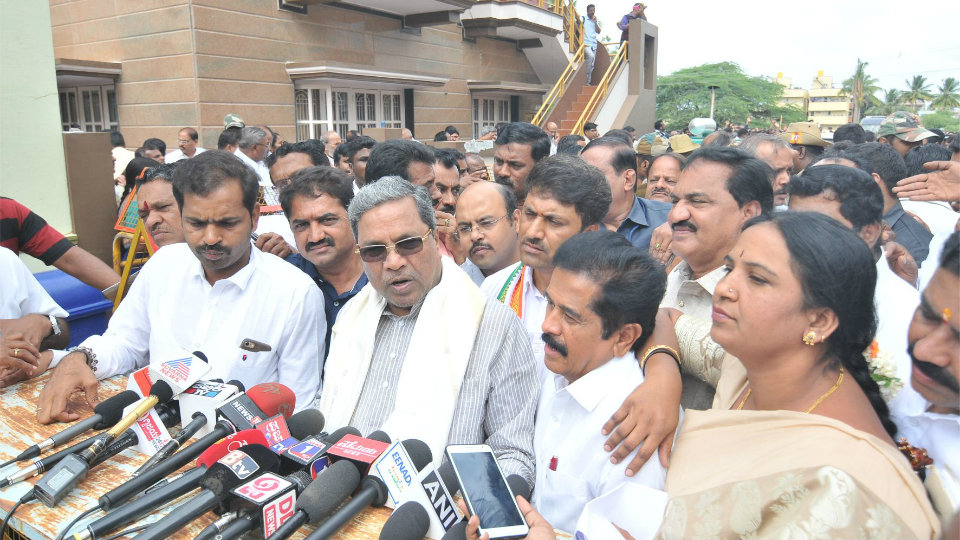 Party High Command will decide on my constituency: CM

Mysuru: Maintaining that it is the Congress High Command which will decide on the constituency that he should contest from, Chief Minister Siddharamaiah has said that the 2018 Assembly election will most likely be his last election.

Speaking to press persons at his residence in Ramakrishnangar here this morning, Siddharamaiah, who arrived in city yesterday for a 2-day visit, said that he had won from Chamundeshwari Assembly segment five times. However, he was facing pressure from the party workers in both the constituencies to contest, he said and added that he would contest from the seat which the High Command asks him to.

Replying to a question on his son Dr. Yathindra’s contest in the 2018 Assembly polls from Varuna, the CM said that it rested on the party High Command’s decision.

Replying to a question on the alleged irregularities in Bengaluru’s Parappana Agrahara Jail, the CM said that he has directed retired IAS Officer Vinay Kumar to conduct a probe into the matter and submit a report.

Referring to BJP’s allegations on the collapse of Law and Order in the State, the CM alleged that the BJP was stoking command violence in the State.

Lashing out at the BJP’s ‘Vistarak’ programme, he said that the programme was only a Hindu Vistarak programme having a communal agenda. Stating that he himself is a Hindu having the name ‘Sidda Rama,’ he took a jibe at the BJP saying that the party was dividing the society in the name of Hindutva.

Reacting to MP Pratap Simha’s allegation that the Siddharamaiah Government was hijacking Central Government schemes, the CM said that the launch at Central programmes are fixed by the Union Government and likewise the State too fixes its own programmes and schemes, which the MP should attend as a people’s representative.

Reacting to State JD(S) President H.D. Kumaraswamy’s remark that the CM should wonder whether he himself will get elected as an MLA in the 2018 polls, Siddharamaiah said that it was the voter who will decide and not Kumaraswamy.

Lashing out at Yeddyurappa, he said the BJP leader had claimed victory even before polling in Nanjangud and Gundlupet by-polls and the poll result very much favoured the Congress candidates, with the BJP tasting defeat.

Expressing concern over the possible failure of monsoon, Siddharamaiah said that the State Government had invited tenders for cloud-seeding. The tender will be finalised shortly and seeding process will commence in about a fortnight, if the monsoon played thwart till then, he added.

Later, the CM received petitions from the members of the public. The crowd at the CM’s residence swelled with the passage of time, with people vying with each other to get closer to the CM to submit their grievances.

The CM asked them not to lose hope as the Government was taking all possible measures for the reopening of the factory.