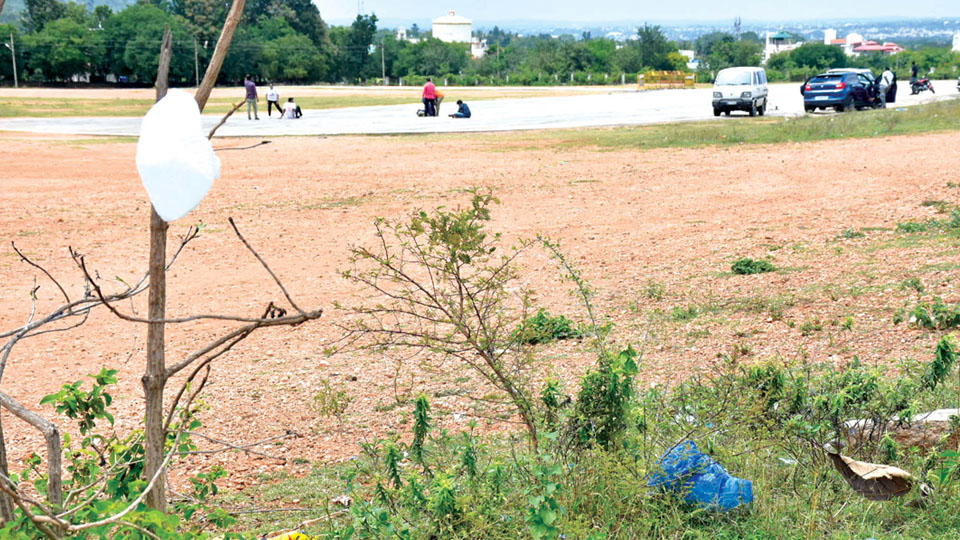 With no VVIP visit, Helipad area turns into garbage dump-yard

Mysore/Mysuru: With no VVIP movement to city, the helipad near Lalitha Mahal  Palace Hotel has become a dumping yard for people.

Used plastic bags, water bottles, paper plates and cups are strewn everywhere thus marring the beauty of the place. The Mysuru City Corporation seems to have turned a blind eye to the garbage being dumped just at a stone’s throw distance from the helipad. The broken bottle pieces indicated that the bush around the helipad has become a haven for the drunkards to do party after sunset. Tepid smell of the garbage hit the nose of passers-by.

The Civic Body, by this time, should have cleaned the entire area, to host the Kite Festival during Dasara. But as the State Government has decided to celebrate Dasara-2020 in a simple manner, the MCC has shown negligence to clean the area. The tree guards around the helipad sponsored by Raghulal & Co. to provide protection to the saplings planted in association with Forest Department, are stuck by used plastic bags.

The concerned residents of the surrounding areas have demanded the MCC to clean the entire area as it has become a black spot.

Miscreants dump all kinds of garbage including torn beds and pillows during night. Even youths use the helipad to host booze party. The MCC should fence the whole area and ban the entry of people into the helipad area, the residents felt.

Hope the MCC will clean up the helipad area soon as the VVIPs are expected to arrive for the coming Dasara festival.