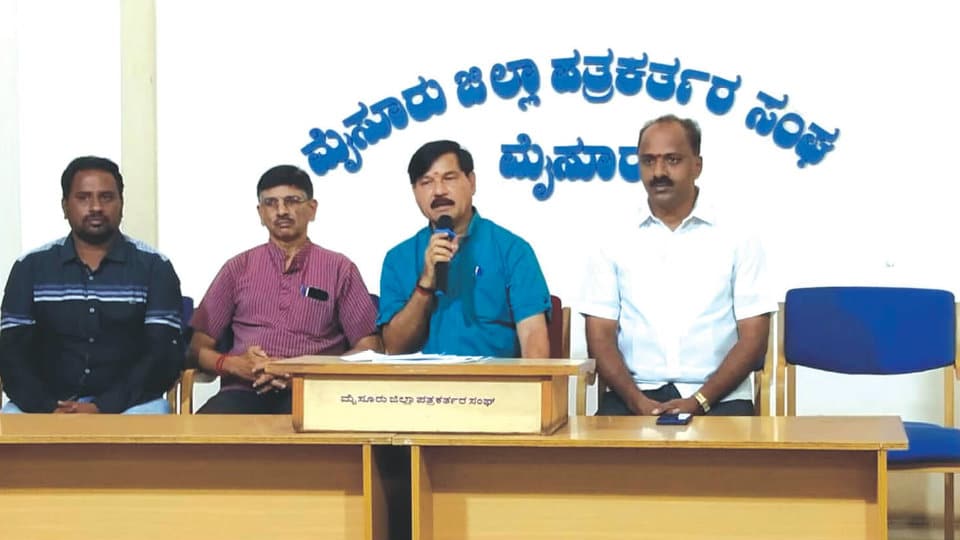 Over 75,000 vehicles ply across the State, livelihood of 1.5 lakh drivers affected

Mysuru:  MLA S.A. Ramdas has urged the State Government to immediately withdraw the ban order imposed on  cab aggregator Ola in the State as it is affecting the livelihood of over 1.5 lakh drivers besides causing inconvenience to commuters across the State.

Addressing a press conference at Patrakarthara Bhavan in city this morning, he said that the Karnataka Transport Department on Friday had suspended cab aggregator Ola for six months, ordering it to stop all its services in the State with immediate effect, for running ‘illegal’ bike-taxi services in Bengaluru.

The order, issued on Mar.18, says the license issued to Ola Cabs Bengaluru up to June 19, 2021, has been suspended and that all the company’s services must be withdrawn within three days of receiving the order.

Ola is providing four and two wheeler service across the State including Bengaluru, Mysuru , Hubballi Dharwad and other Districts by plying 75,000 vehicles. Thousands of jobless youths are registered with this cab aggregator and are eking out their living.

“The company is generating revenue to the tune of Rs. 8 crore alone in Bengaluru which is the biggest market after New Delhi in the nation.  The drivers and their families would come to street if the government fails to withdraw this ban order by tomorrow evening,”, he said.

Condemning the government for launching seizure operation of banned Ola cabs, he threatened that his party would launch a massive rally across to extend support to Ola cabs.

“Let the government penalise Ola for flouting the rules of operating two-wheeler service as they did not have a license to operate, but it should not stop the four-wheeler cab service in the larger interest of public,” he added.

The former Minister also said that he would file in Public Interest Litigation( PIL) in the Apex Court in this regard and urged the government must initiate dialogue with Ola to resolve this issue.

He alleged that the State Government would have issued the order to raise funds for the Lok Sabha elections which the State is going in two phases on Apr. 18 and 23.

Corporator B.V. Manjunath and BJP leaders were present during the press meet.

BJP leader S.A. Ramdas said that a Shobha Yatra will be taken out from Kote Anjaneyaswamy temple till DC office during the filing of nomination paper of BJP candidate Pratap Simha from Mysuru- Kodagu LS seat on Mar. 25 at 12 noon.

A large number of party activists in all  2,170 polling booths will take part in the Yatra tomorrow.