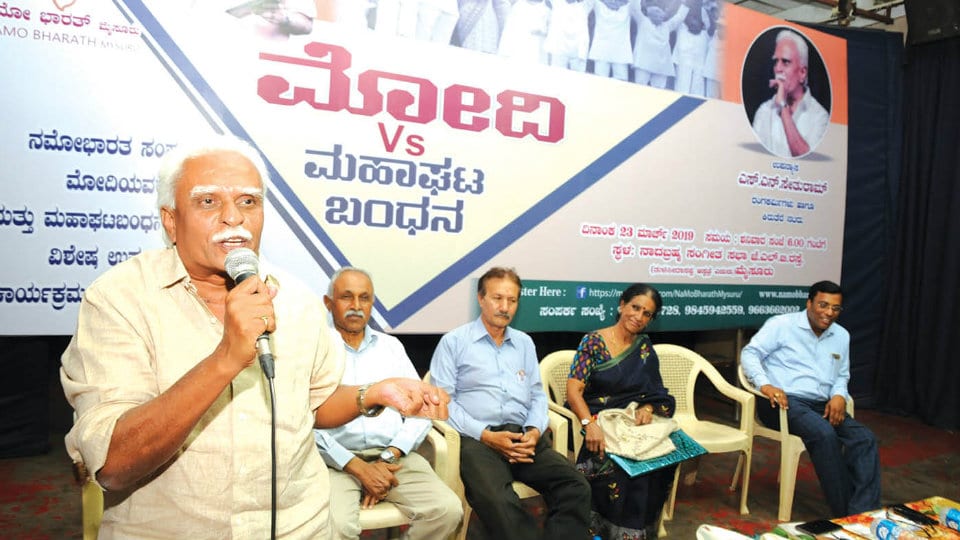 He was giving a special talk on ‘Modi versus Mahagathbandhan,’ organised by Namo Bharath Mysuru at Nadabrahma Sangeetha Sabha on JLB road here yesterday. Accusing Mahagathbandhan leaders of corruption and non-performance, he alleged that there has been little development of Bengaluru over the past six years.

Hailing PM Modi for completing the works & projects launched during Nehru era, Sethuram alleged that many of the projects and schemes launched by the previous Government at the Centre remained only on paper.

Strongly defending demonetisation and GST, he said that they were key economic reforms to weed out black money and black marketing. Accusing the Mahagathbandhan leaders of compromising on National Security, he said that National Security was one of Modi’s primary concerns and he had worked out plans for making India a safe and secured country.

Maintaining that Modi is an exemplary PM, he said that every voter must vote and re-elect Modi as the PM.

Urging the people to put an end to dynasty politics, he said that Mahagathbandhan leaders had destroyed democratic institutions. Cautioning the people to be wary of Mahagathbandhan plans, he said that these leaders had no other development agenda on vision. He reiterated that Modi’s re-election would be a huge victory for democracy and for the country.