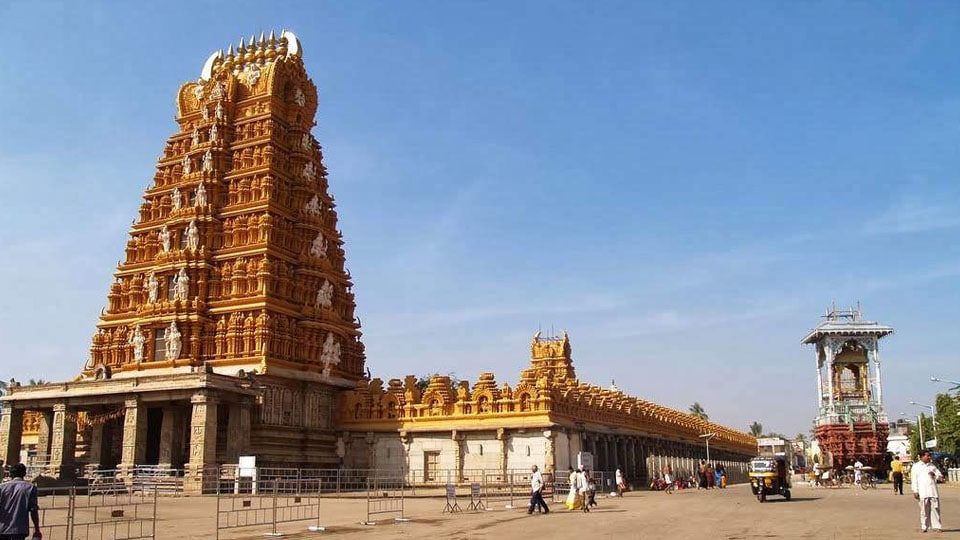 Woman’s death in Temple area: No rituals at Srikanteshwara Temple in Nanjangud for two days

Nanjangud: Hundreds of devotees have been put to a lot of inconvenience at the historical Srikanteshwara Swamy Temple at Nanjangud as the Temple has been closed for all kinds of sevas and rituals owing to the death of a woman in the Temple premises. Devotees can only have darshan and they cannot perform any kind of puja to the deity.

The Temple will be closed for the next two days. As per tradition, if any death occurs near the Temple premises or on the road that leads to the Temple, no ritual will be held at the Temple till the body is cremated. Once the cremation is over, the Temple is purified with Shuddhikarana rituals and only then the pujas will be held. This is the reason why the cremation is performed early in every case.

Yesterday, Padmavathamma (90), wife of late K. Shrikantaiah, a former employee of Srikanteshwara Temple died. The family members are expecting her son Shankar who is settled abroad to come to Nanjangud to perform the last rites. He is scheduled to come only on Saturday (May 11) and till then, no rituals will be performed at the Temple.

This has put the devotees into a lot of inconvenience and people who have booked sevas in advance or through online system are returning empty handed. Otherwise too, hundreds of devotees who came today for sevas have returned after having darshan.

Realising the inconvenience to the devotees, Temple Executive Officer Kumaraswamy yesterday met the family members urging them to cremate the body but they refused and said that they will have to wait for the deceased’s son to arrive. “As per tradition, sevas and rituals have been stopped but devotees can have the darshan of the Lord,” Kumaraswamy told Star of Mysore this morning.