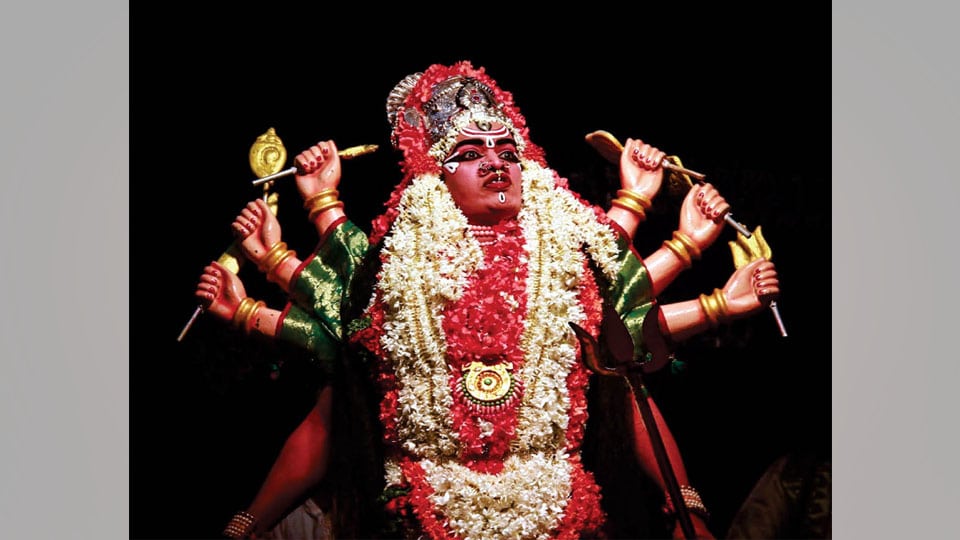 On the occasion, Higher Education and District in-Charge Minister G.T. Devegowda and  FKCCI President Sudhakara S. Shetty will be felicitated.

Yakshagana is a popular folk theatre form of Karnataka with a long history of nearly four hundred years. A performance usually depicts a story from the Ramayana, the Mahabharata and the Puranas. Yakshagana  is a traditional theatre form that combines dance, music, dialogue, costume, make-up, and stage techniques with a unique style and form.

This theatre style is mainly found in Tulunadu and some parts of Malenadu region of Karnataka and Kerala. Yakshagana is traditionally presented from dusk to dawn. The ‘Devi Mahathme’ is a 700-verse poem and a part of the ‘Markandeya Puraana.’

Devi Mahatme has been a popular story on which many Yakshagana troupes stage their shows.

The Story: ‘Devi Mahathme’ is entitled the extermination of the Mahisha’s army and deals with the slaying of the demon Mahisha. Mahishaasura was a buffalo-headed demon. He was granted a boon whereby he would be protected from anyone. Intoxicated by the above gift, he set out to conquer the world.

Mahishaasura defeated Indra, the king of the Gods. Indra implored Brahma, Vishnu and Mahesh to help him. The Divine Trio amalgamated their Shakti (power) and created Durga. Ma Durga fought Mahishaasura for nine days and beheaded him on the 10th day. The nine days are those of Navratri and the 10th victorious day is called Vijaydashami. A point to note is that as Mahishaasura was attacked, the latter would change its forms to elephant, bull, buffalo, until ultimately it is killed.

The buffalo also represents the base animal instinct in a human being. Goddess Durga is powerful enough to control Evil that comes in disguise.