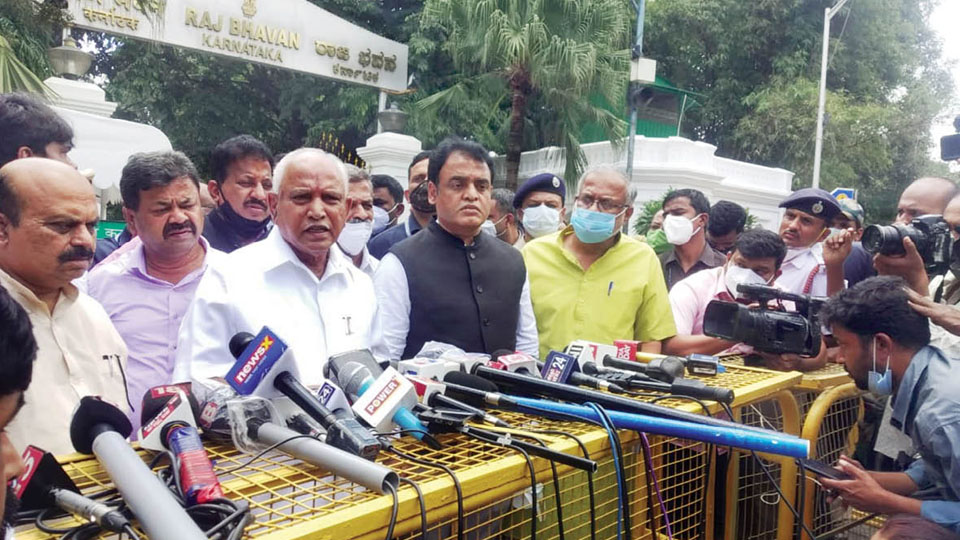 Bengaluru: Ending days of speculation, Karnataka Chief Minister B.S. Yediyurappa resigned this afternoon, exactly two years after he became the CM on July 26, 2019. He broke down as he announced that he would resign after lunch.

Yediyurappa was speaking at Vidhana Soudha as BJP Government marked its second anniversary today. “I will resign,” he announced in a tearful speech in which he talked about being tested constantly in the past two years and going through ‘agni parikshe.’

After the announcement, the CM left for Raj Bhavan to meet Governor Thaawarchand Gehlot where he tendered his resignation. The Governor, accepting the resignation, as per practice, asked Yediyurappa to continue in Office as care-taker CM till a new CM takes over.

Moments before, Yediyurappa told reporters that he did not resign under pressure from the High Command but out of his own volition. “No one has pressurised me. I am resigning on my own and I will be in Karnataka and will not go as Governor to any State. Will be here to serve the people,” he said.

As Yediyurappa resigned, BJP National President J.P. Nadda and Union Minister Pralhad Joshi met Home Minister Amit Shah. The Party will send Observers to Bengaluru to select the new CM. The date of the BJP Legislature Party meeting is yet to be decided. Joshi, coincidentally, is also one of the frontrunners for the post of CM though he has maintained silence on the issue.

Struggling hard to hold back his tears, Yediyurappa, who addressed the media at Vidhana Soudha said, “When Atal Bihari Vajpayee was the Prime Minister he asked me to be a Minister at the Centre. But I said I will be in Karnataka.”

The BJP has grown in Karnataka over the years, the 78-year-old BSY said, adding, “It has always been an ‘agni parikshe’  (trial by fire) for me. These last two years it was COVID. One after another I faced ‘agni parikshe.’ I’ve worked in spite of it. I don’t know how to thank Government servants and the Chief Secretary. All of them worked hard and trusted me.”

“I’ve a debt to pay back to the people of Karnataka. I ask Officers and MLAs to work harder and in a transparent manner,” Yediyurappa added.

“I have been continuously working to strengthen the party in the State. For two months (in 2019), I didn’t get to make my Cabinet. There were floods and I roamed like a mad man. Later the Cabinet was formed,” he said.

Before meeting the Governor, the CM tweeted, “It has been an honour to have served the State for the past two years. I am humbled and sincerely thank the people of the State for giving me the opportunity to serve them. I am grateful to PM Narendra Modi, J.P. Nadda and Amit Shah for their support.”

“Deeply influenced by Jagajyoti Basavanna’s philosophy of Kayaka, Dasoha Tatva and the life of Lingaikya Dr. Sri Shivakumara Swamiji of Siddaganga Mutt, I have dedicated my entire 50 years of public life towards nation-building and fulfilling the aspirations of the people of  Karnataka,” he said.