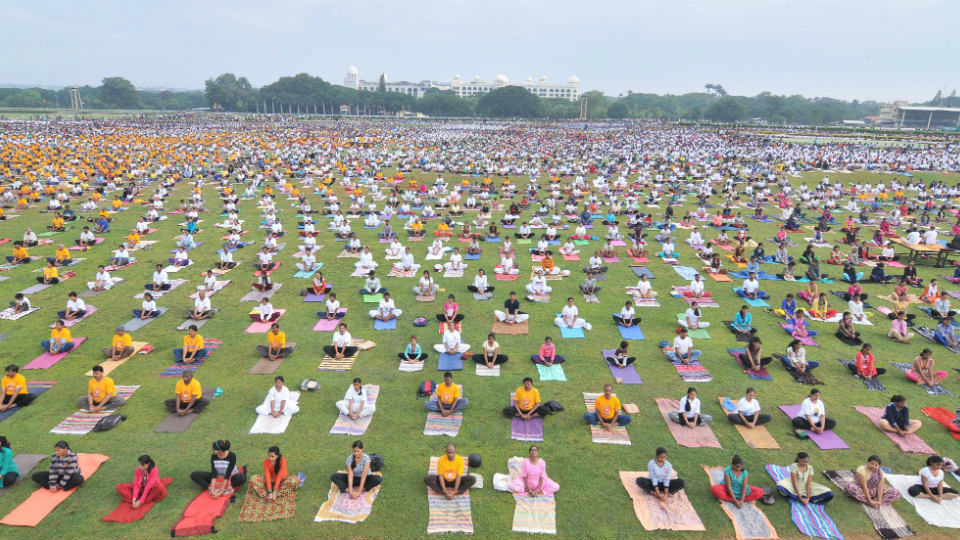 Mysuru is agog this week having hosted the historic event of World Yoga Day (June 21), mainly to lay claim to Guinness Record of organising more than 60,000 participants at a single venue performing 21 asanas, a selection from the list of asanas that has come down from Sage Pathanjali, whose yogasutras date back to more than 22 centuries. Unmindful of whether yoga is a religion or philosophy or ideology, people at large have taken to practice of asanas seeking physical, mental and spiritual wellness. Hordes of aspirants of the ancient discipline from the West have virtually conquered the city, transforming Mysuru into the nation’s yoga hub. In the process, other legacies inherited by the current generation such as ayurveda, naturopathy, meditation and so on have got stumped by the all-pervading yoga bug. The era of imparting the necessary skills for performing the asanas as a service to humanity has yielded place to the current times of spinning money in enviable amounts by teachers of all hues.

Royalty of the erstwhile Princely State of Mysore is credited with extending patronage to a humble teacher of the ancient discipline whose student, also a close relation of the master, established his school of yoga in Pune some eight decades ago from where there was no looking back. There is hardly any country with literates in the population where yoga is either not known or practised.

Keeping slim and trim is more talked about in sections of society marked by sophistication, who take pride in letting their friends and relatives know about their secret of keeping well by practicing yoga and adhering to ayurveda. While yoga continues to cast its spell on both its current practitioners and those toying with plans for falling in line, ayurveda has just rattled the players in the world of allopathy. Vested interests in the West, fearing loss of market for their drugs have begun to raise voices mainly on issues of lack of scientific evidence for the health benefits from the system, absence of standards for the products and quackery dominating ayurveda practice. As if to add insult to injury, a medical practitioner from Pune has taken upon himself to issue an advisory for pregnant women to eschew meat, eggs, anger, desire and lust in order that they don’t give birth to children with stunted growth. He has dared the authorities of the Union AYUSH Ministry by slamming its recently issued recommendations on what expectant mothers should or shouldn’t do to have healthy babies.

READ ALSO  Beyond beauty of Birds

While the debate on diet of women bearing child gathers pace, another issue concerning obesity of populations across the world has figured in an article recently published in a peer-reviewed science journal, saying more than 10 per cent are obese globally. India’s response to that claim could be that yoga addresses the problem of big build and ayurveda addresses the issue of bearing normal children.