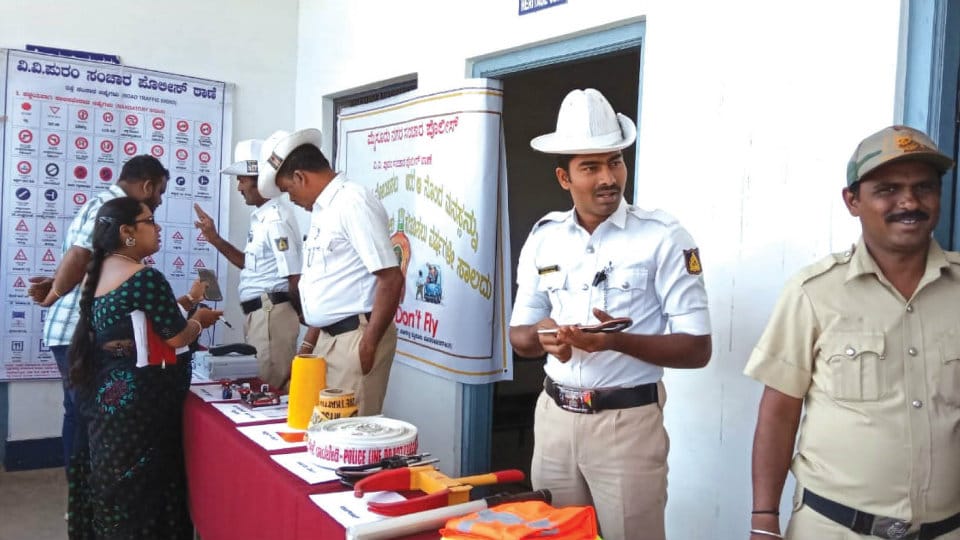 Mysuru:  Youths are major culprits in violating traffic rules and they are the ones involved in most of road accidents, regretted University of Mysore National Service Scheme (NSS) Programme Coordinator Dr. B. Chandrashekara.

He was speaking at a workshop on ‘Road Safety and Traffic Rules’ organised jointly by Basudeva Somani College and University of Mysore NSS Units at the college premises recently. He said that including not wearing helmets, it was the youth who were found breaking other traffic rules.

Youth in the 18 to 25 age-group are involved in most of the accidents and they are solely responsible for this sorry state, he added.

“One of our relative’s sons was on a picnic along with his friends, riding motorbikes. He met with a serious accident and suffered head injuries as he was not wearing helmet and also broke his spine. Now, he is bed-ridden. This 25-year-old youth who was supposed to be a source of strength and support to his parents in their old age, himself has become a burden on them as they have to look after him. Hence, it is very important to follow traffic rules,” he said.

When young lives are snuffed out not only is it a great personal loss and tragedy for the family but also indirectly affects the nation’s growth, which now has one of the largest populations of youths in the world.

Youths should remember that traffic rules are meant for everyone so that there is discipline on the roads. But they do not understand this basic concept and keep violating indiscriminately, he regretted.

University of Mysore NSS Programme Coordinator (retired) Prof. B.K. Shivanna said that the motto of NSS is “Not Me But You.” By following the traffic rules, NSS volunteers must create awareness among others in the society.

Mysuru City Traffic Division ACP G.N. Mohan said that including traffic rules, public must follow all other rules and for this there must be a conscience. The youth should inculcate the habit of criticising the wrongs in the society and talking straight.

They should be ready to face challenges that arise in one’s life. If one overcomes small problems in their young age, then they can face any big problem in the future successfully, he said.

A seminar and interaction programme on “Better Transport System and Rules and Regulations for Public Safety” and “The Relevance and Challenges in Traffic Rules in a Changing Transport Scenario” was organised on the occasion.

An exhibition of devices used by Traffic Police as part of the workshop that was organised at Basudeva Somani College premises. Some of the devices on display included ‘hand held device’ that gives information on traffic rules violation, Alcohol breath-analyser and shoulder light that the traffic Police use during night rounds. Along with this, charts on information on road signs to follow traffic rules were also displayed.