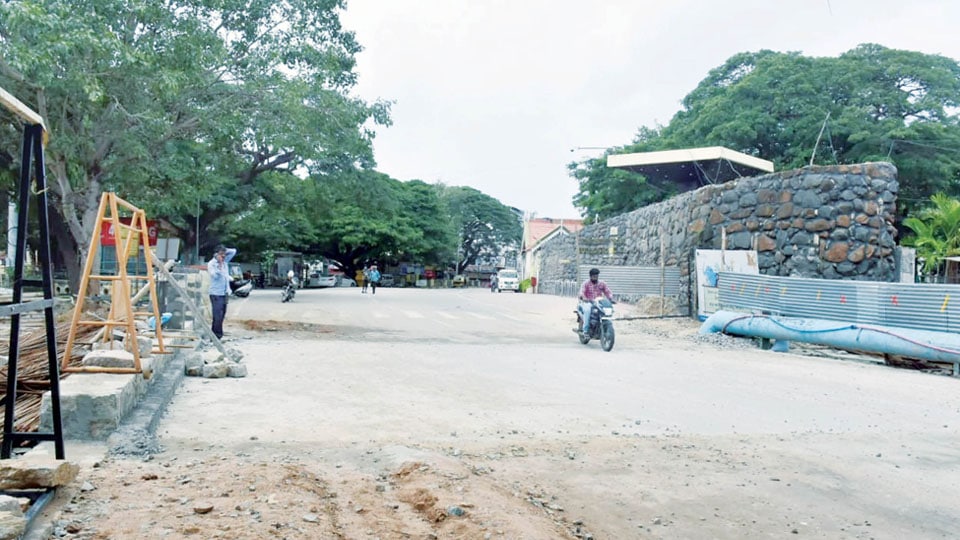 Was closed for motorists on Jan. 17; works on subway, interiors to be completed soon

Mysore/Mysuru: The road (Shalivahana Road) in front of Mysuru Zoo, which was closed for the construction of a subway to prevent frequent traffic jams on the ever-busy stretch, was opened for traffic on Sunday (Sept. 20) evening.

It was opened after the roofing and curing works of the subway, that runs under the road, was completed.

The construction of the subway was taken up to enable visitors and tourists to cross the Shalivahana Road from the parking area safely and without hindering traffic as the road witnessed heavy traffic jams.

While the structure of the Subway has been completed, the cement plastering and design works inside the subway and other works are expected to be complete soon.

Zoo Executive Director Ajit M. Kulkarni, speaking to SOM this morning, said that the progress of works was hampered due to lockdown. Elaborating on the subway, he said that works such as installing barricades to split the subway for entry and exit of tourists, lighting and CCTV cameras would be completed soon and tourists would be allowed to use the subway in the next 15 days. Once functional, pedestrians and tourists need not cross the busy road to reach the Zoo but can park and walk through the subway, under the road, to reach the Zoo entrance.

It may be recalled that the subway works that began on Jan. 17 was scheduled to be completed by March 2. But the works were delayed by a month when the diggers hit huge boulders and a water pipeline. It was further delayed when supply of construction materials was hit due to the lockdown.

The tender for the construction of the subway at a cost of Rs. 1.75 crore was awarded to Vinyas Builders of Bengaluru. Initially, the subway works was scheduled to commence from Jan. 2 and the Police had given a deadline for the completion of the construction by Feb. 15. But as there was influx of tourists to city then, the work was postponed for 15 days and it began only on Jan. 17 and was scheduled to be completed by March 2  instead of the earlier date of Feb 15.  The subway is 24 meters in length, 4.9 mts wide and 10 ft. tall and  13 ft. deep. The walls of the subway will have paintings based on the theme of ‘Wildlife Conservation’ and will be taken up once the cement plastering inside the subway is completed. The subway has also been designed keeping in mind  to prevent flooding of the subway during rains.