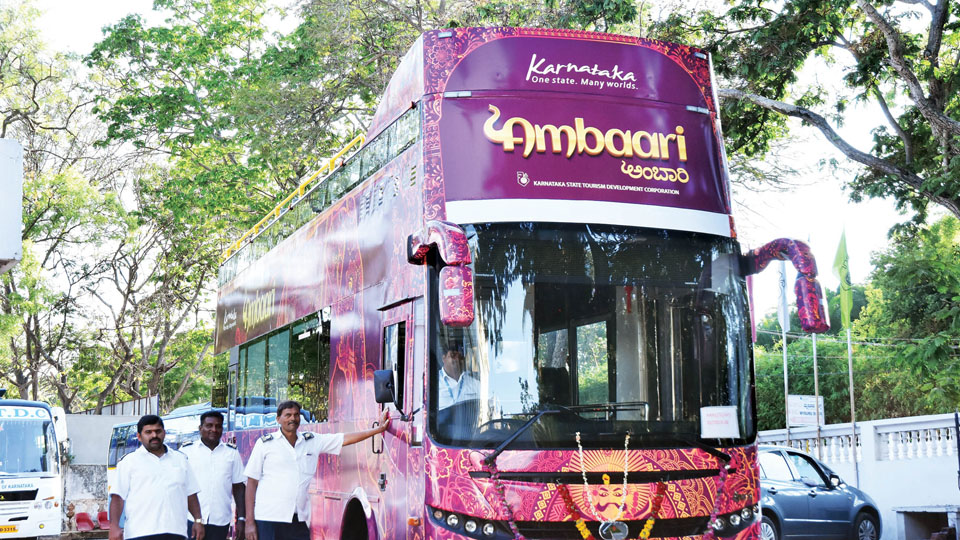 Mysore/Mysuru: With less than a month for Dasara-2020, which is being celebrated in a simple manner this year on account of COVID-19, preparations are on for ‘Ambaari’ Double Decker bus ride on designated routes to cover prominent tourist spots within the city.

‘Ambaari’ is a specially-built bus for open-roof tours, with a seating capacity of 40. The bus, an initiative of State-run KSTDC (Karnataka State Tourism Development Corporation) is being launched as a tourist attraction.

Although KSTDC had built a total of six buses,with four meant for the city and two for Hampi in Ballari district, one bus had arrived in Mysuru in March just a few days before the lockdown.

The bus was parked in KSTDC premises on JLB road. Now, following lockdown relaxations and with Dasara round the corner, the authorities have fine-tuned the bus in certain aspects, including the audio-video experience and have made it ready for operation during Dasara.

Tree pruning begins: Following a request by KSTDC, the MCC and Forest Department authorities have begun pruning of trees and tree branches on all roads that the ‘Ambaari’ bus has been identified to travel.

The CESC has also been requested to remove its overhead power lines for facilitating movement of the Double-Decker bus.

KSTDC Regional Manager Uday Kumar speaking to Star of Mysore said that ‘Ambaari’ is a Hop-on and Hop-off initiative for tourists to experience the magnificent City of Palaces and other Heritage and Cultural structures. The tourists will get an audio guide the moment the bus reaches the particular tourist spot. The audio is currently available in two languages — Kannada and English.

The 40-seater bus with lower and upper-decks were built in Bengaluru after KSTDC approved the tender last year. The KSTDC has got one bus for now in Mysuru, which will be first run on a trial basis and three more will be introduced later depending upon the response, he said.

Pointing out that the bus will begin its journey from KSTDC premises (Hotel Mayura) on JLB road  on  every trip, Uday Kumar said that the bus is proposed to cover 14 important tourist destinations in the city, which include Mysore Palace, Jaganmohan Palace, Open Air theatre, Manasagangothri, Mysuru Zoo, Karanji Lake, Crawford Hall, CFTRI and St.Philomena’s Church, among others.

The date of launch, the timings and the ticket price for  ‘Ambaari’ tourist bus will be finalised shortly, he said and added that works on pruning of trees and replacement of overhead cables with underground cables on designated routes is expected to be completed in a week.

Uday Kumar further said that all COVID-19 precautionary and safety measures will be strictly followed in the running of the  Double Decker bus and only 30 tourists will be allowed in one trip.