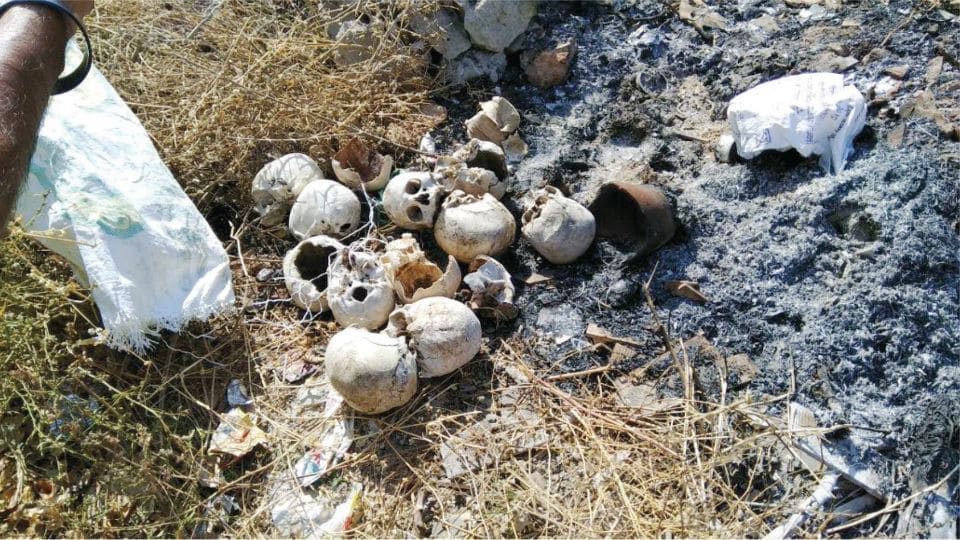 Mysuru: Over 13 human skulls were found dumped this morning at a vacant site in Vijayanagar Second Stage here.

As soon as the news spread, hundreds of curious onlookers gathered at the area. The skulls were thrown at a vacant site behind a school near the road that leads to Hinkal.

The skulls of adult human beings and children were dumped amidst waste and there was a gunny bag nearby.

The skulls were spotted by some rag pickers and Pourakarmikas who alerted the local people. Various rumours started doing the rounds even as the residents gathered at the spot.

People told Star of Mysore that it is a busy area and the finding of skulls at a place that is not a grave yard led to suspicion. Pourakarmikas who spotted the human skulls said that initially they found a gunny bag dumped in the area and they were shocked to see skulls when they opened the bag.

Onlookers suspected that the skulls might have been found when workers dug up a particular place to construct a building and they would have brought them to Vijayanagar to dump at the vacant site. Others said that some medical college would have dumped old skulls at that place or people who indulged in black magic would have thrown them there.

Police told Star of Mysore that it was difficult to suspect a foul play at this juncture. “We will send these skulls to Forensic Science Laboratory in Bengaluru and will await the reports,” said Anil Kumar.