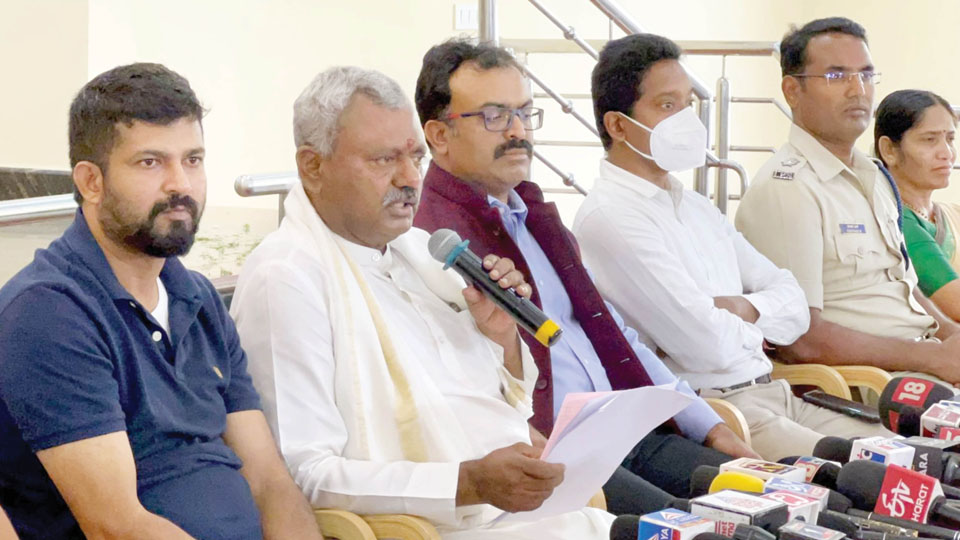 Mysore/Mysuru: Though there are no parameters to assess the number of people who watched the Jumboo Savari on the Vijayadashami Day from the Mysore Palace to Bannimantap, District Minister S.T. Somashekar has claimed that over 15 lakh people were physically present along the route, cheering the grand spectacle.

Addressing a press conference-cum-luncheon for media at a Convention Hall in J.P. Nagar yesterday, the Minister said that except for minor glitches, Dasara-2022 that began with the inauguration by President of India Droupadi Murmu atop Chamundi Hill on Sept. 26, was a tremendous success.

Happy over the successful conduct of the ten-day festivities that culminated with the procession on Wednesday, Somashekar thanked the public, elected representatives, officials, journalists, Police and all other stakeholders for the smooth conduct.

Pointing out that this year’s Dasara, which was held on a grand scale after two years of COVID pandemic, was more glittering and spectacular, with the illumination of a total of 124 kms of roads, 96 prominent circles and junctions of the city and lighting of 28 personalities, figures and representations, Somashekar said that following a direction from the Chief Minister, the illumination will be extended by a few more days.

Noting that ‘Appu Namana’ in memory of late actor Puneeth Rajkumar has received widespread appreciation, the Minister said that the Dasara Flower Show, in which over 50,000 varieties of flowers were on display, had been a huge hit.

Highlighting that other Dasara events such as cultural programmes at Mysore Palace premises and nine other venues, Raitha Dasara, Mahila Mattu Makkala Dasara, Yuva Dasara, Kavighosti, Ahara Mela etc., too witnessed tremendous public response, Somashekar said that the Dasara expenditure accounts will be made public soon. He said that like last year, Nalwadi Krishnaraja Wadiyar Award was conferred upon ten achievers from different fields. The awardees were chosen by a panel, he added.

He further said that Kaigarika Dasara and a Medical Expo at MMC&RI were organised for the first time. Lauding the work of Pourakarmikas, he said that they carried out cleaning works across the city from 11 pm till early morning on Thursday, after Jumboo Savari concluded late on Wednesday.

READ ALSO  Dasara holidays in district from Sept. 26 to Oct. 9