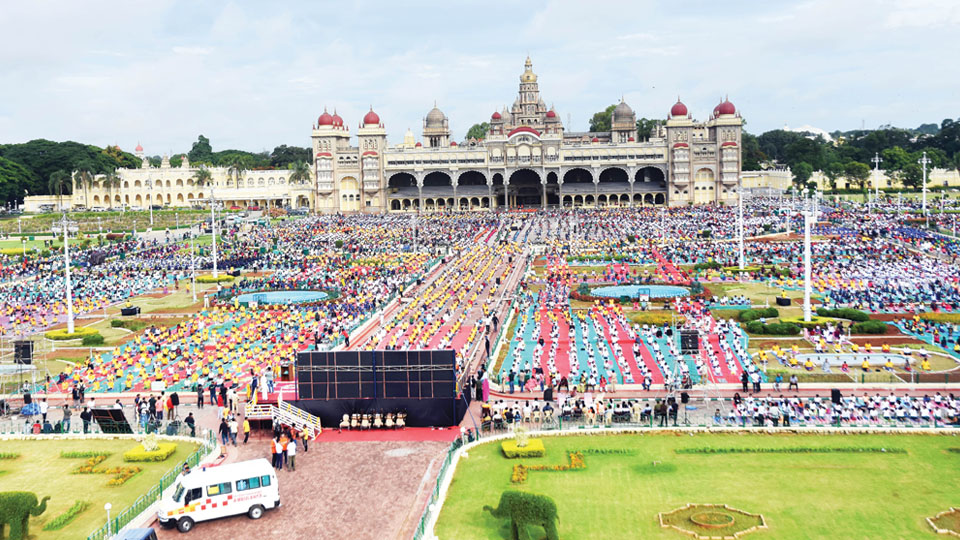 Mysore/Mysuru: The actual countdown for the main International Day of Yoga (IDY) on June 21 where Mysureans will perform with Prime Minister Narendra Modi at Mysore Palace in city began this morning with a rehearsal that attracted 16,000 Yoga enthusiasts including children, senior citizens, students and the public.

This was the second official rehearsal based on the common Yoga protocol and next Sunday, June 19, the final rehearsal will be held at the same venue and will be organised by Central AYUSH Department.

Today’s rehearsal was marked by people who filled all empty spaces inside the sprawling Palace campus, even occupying paths and lawns.

In earlier weeks, the rehearsals were held at Maharaja’s College Grounds on May 22, Suttur Mutt on May 29 and first official rehearsal based on Yoga protocol was held in Palace on June 5.

Today’s event was inaugurated by Suttur Seer Sri Shivarathri Deshikendra Swamiji by lighting the traditional lamp. Sri Swamiji said that PM Modi has intentionally selected June 21 as IDY as on that day, the Sun is present at North Pole. “By performing Yoga every day a ‘Healthy World’ must be created,” he said.

Director of Morarji Desai National Institute of Yoga Ishwar Basavaraddi said, the Mysuru Maharajas have written several books and in one of those books they had mentioned T. Krishnamacharya who was the Palace Yoga Guru and mentioned him as the ‘Father of Modern Yoga’.

Titular head of the erstwhile Mysore Royal family Yaduveer Wadiyar said, PM’s visit will bring special pride to Mysuru. “Yoga was first started by Nalwadi Krishnaraja Wadiyar and was introduced at Sanskrit Pathashala. Krishnamacharya was one of the first gurus to combine the importance of breathing and physical exercise, and also integrated meditation with Yoga asanas. It was his disciples, Pattabhi Jois and BKS Iyengar, who popularised yoga worldwide,” he said.

Special stage: A stage has been set in front of Balarama-Jayarama Gate where Modi will deliver his speech on June 21. It has been set up in such a way that the Palace can be seen from the stage and a perfect spot for the PM as well as all Yoga enthusiasts to perform with impressive structure on the backdrop.

Mysuru-Kodagu MP Pratap Simha snubbed MLA Ramdas in full public view on the issue of the number of attendees at the Palace. The MP was addressing press persons and was giving a broad outline of the PM’s visit and performance on June 21. When the issue of the crowd came up, Simha said that only 8,000 people will get a chance to perform with Modi.

MLA Ramdas butted in and said that a limit of 15,000 has been set and approved by the authorities. Irked by this interruption, Simha said, “Ramdasjee I am speaking… please keep quiet.” Simha continued that as per the specifications, only 8,000 people will have visibility at PM’s performance as each performer has to have 6X6 ft space with the Yoga mat.

“If there is clearance by the SPG for performance inside parks and lawns, we can accommodate 15,000 people. Also, we will erect giant screens for people to view Modi’s performance,” he said.

As the MP ended his address and walked away, Ramdas was asked by reporters about the 8,000 and 15,000 comments to which the MLA said, “I am part of all the stages of the preparations made of the June 21 event and 15,000 participants will get a chance even keeping the individual 6X6 ft space. The MP may not have information on this,” he said.

The MLA was quick to add that he just clarified the numbers and has no difference of opinion with the MP.