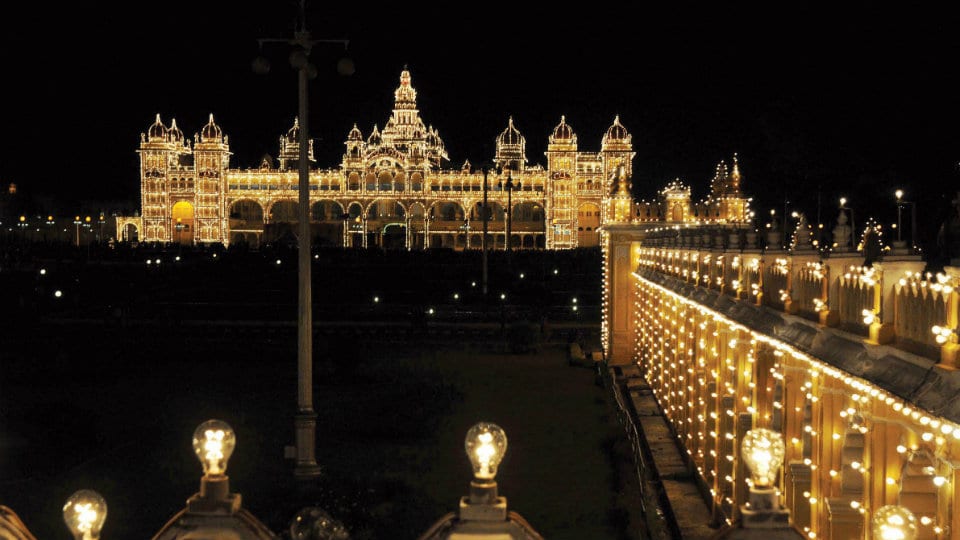 Mysuru: What is the type of transformer that keeps the illumination of the Mysore Palace uninterrupted? It is a network called the Delta-Delta type transformer that is not found anywhere else in the country but is installed at the Palace. There are two transformers of 1000 KV and two of 500 KV that are installed at the Palace premises that helps in the uninterrupted power supply to the nearly one lakh bulbs that keeps the whole of the Palace premises bathed in a golden glow.

These Delta-Delta type transformers are of a specialised category, whereas general Distribution companies in the country are making use of Delta-Star with neutral point.

Asked what is so unique about Delta-Delta, Mysore Palace Board Deputy Director T.S. Subramanya, speaking to Star of Mysore said that in this type, as there are nearly one lakh bulbs, if a bulb burns out, only that bulb will go off and all the other bulbs will continue to glow, which is not possible if for instance in Delta-Star with neutral point. Hence, when the illumination of the Palace was done nearly 75 years ago, this system was adopted realising its advantages. However, for general lighting of the Palace, a 250 KVA transformer is also installed, he added.

Earlier, the incandescent bulbs fixed on the main Palace and all gates were of 30 watts capacity. Then there were fewer bulbs also. But realising that it consumes more power, 15 watt screw type incandescent transparent bulbs were replaced about 30 years back. Now with nearly one lakh bulbs, the golden glow (like in the 30 watt) is maintained, he said.

Even as the bulbs keep getting burnt due to exposure in the sun and rain and bird droppings, it will be replaced. Usually a stock of 22,000 bulbs is requisitioned in a year. This year for Dasara about 18,000 screw-types 15 watt bulbs are being replaced, Subramanya said and added that the advantage of screw type is that even if it is stolen it cannot be used at homes or in other places.

Except for the illumination of the Palace, in other places LED fittings for energy conservation as well as to reduce Co2 (Carbon-di-oxide) emission have been used, he said.

Power supply to Mysore Palace is arranged by the Chamundeshwari Electricity  Supply Corporation (CESC) at 11 KV voltage class. There are four different 11 KV feeders which are connected to Mysore Palace Board Power Distribution Station for arranging uninterrupted power supply, keeping the convenience of tourists and security point in mind, he said.